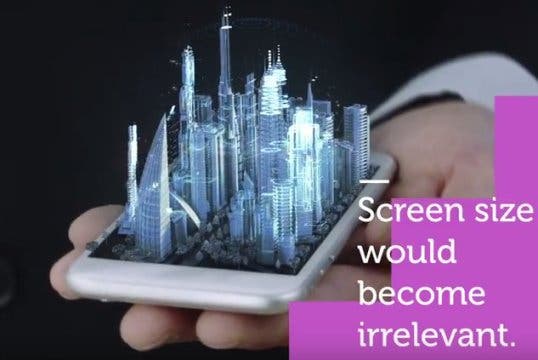 For decades, holograms have been a staple of science fiction. You’ve seen them in Star Wars or Avatar, but soon enough you might enjoy them virtually everywhere. That’s because a team of researchers from Australia and China was able to design a nano-hologram that’s thin enough to work with modern electronics. No 3D-goggles are required to see these holographic images which can be 1,000 thinner than the human hair.

Conventional holograms give the impression of a 3D object by modulating the phase of light. This gives the illusion of 3-D depth but to generate enough phase shifts, each hologram needs to be at least as thick as the phase-shifted optical wavelengths. Australian researchers from RMIT University, along with Chinese colleagues from the Beijing Institute of Technology (BIT) managed to pull a workaround by using a topological insulator. This is an exotic class of materials that has the unique ability to conduct electricity at the surface, but not on the inside through the bulk material.

Topological insulators also have unique quantum properties like a low refractive index at the surface and a ultra-high refractive index in the bulk. When a very fast direct laser is shone a thin film made from such exotic materials, it’s possible to enhance phase shifts for holographic imaging.

“We discover that nanometric topological insulator thin films act as an intrinsic optical resonant cavity due to the unequal refractive indices in their metallic surfaces and bulk. The resonant cavity leads to enhancement of phase shifts and thus the holographic imaging,” the researchers wrote in the journal Nature Communications.

For instance, the holograms demonstrated by the researchers operated at 60 nanometers of 3 mm × 3 mm in size

T-rex in your pocket 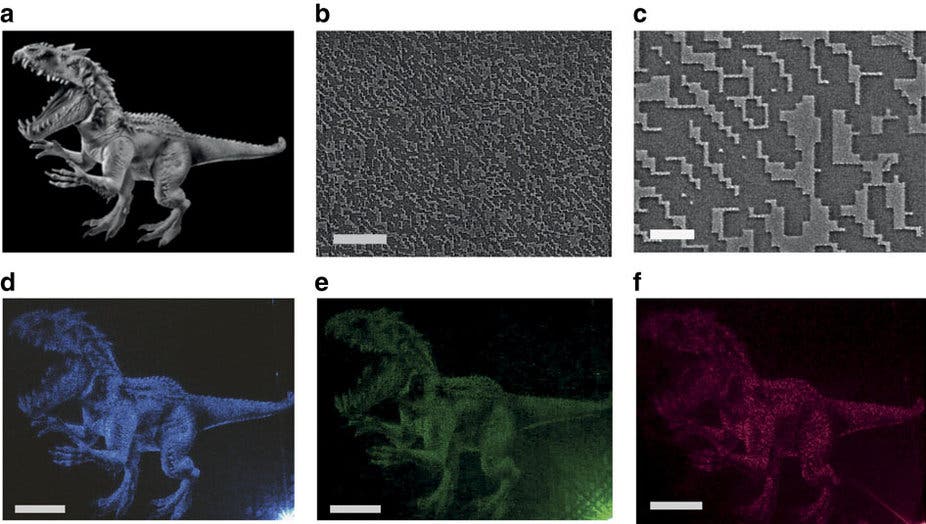 (a) Original image of the dinosaur object. Note: this figure is not included under the article CC BY licence; Indominus Rex image is reproduced with permission from the publisher Comingsoon.net and copyright owner Universal Studios. (b,c) SEM images of the laser printed hologram patterns. The scale bar is 50 μm for b and 10 μm for c, respectively. (d–f) Holographic images captured by illuminating the nanometric holograms using 445, 532 and 632 nm continuous wavelaser beams. Scale bars for d–f are 1 mm. Credit: Nature Communications.

“Integrating holography into everyday electronics would make screen size irrelevant — a pop-up 3D hologram can display a wealth of data that doesn’t neatly fit on a phone or watch.

“From medical diagnostics to education, data storage, defence and cyber security, 3D holography has the potential to transform a range of industries and this research brings that revolution one critical step closer.”

The next step for the team is developing a rigid thin film that can be placed on an LCD screen, such as that on a smartphone or notebook, to enable everyday use of 3D holographic display. This will be immensely challenging as it involves shrinking the nano- hologram’s pixel size even further — at least 10 times smaller than it currently is.

“But beyond that, we are looking to create flexible and elastic thin films that could be used on a whole range of surfaces, opening up the horizons of holographic applications.”