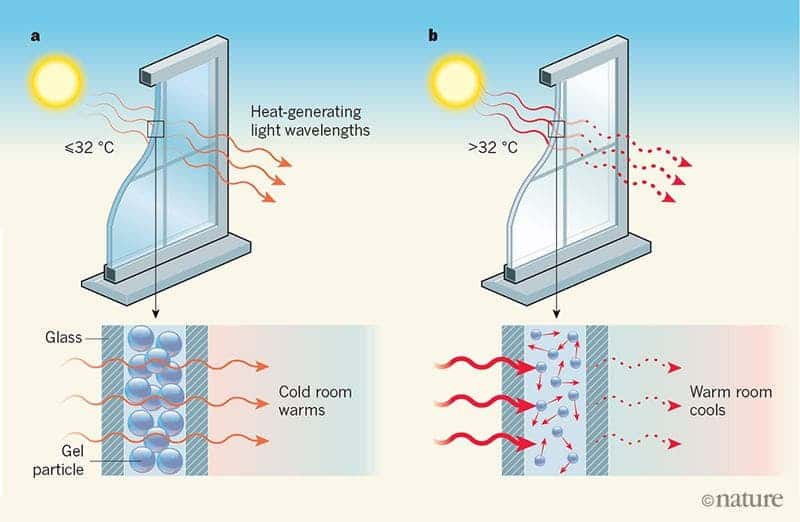 Schematic of the working principle behind the temperature-sensitive polymeric gel microparticles. Credit: Nature.

Researchers at MIT have devised polymer gels that are fitted inside double-pane windows, allowing or blocking near-infrared light from entering a building. The gel’s properties are regulated by temperature, so the whole process is automatic once a certain thermal threshold is breached. About half of all energy used by households in the United States is used for heating and cooling, so this kind of technology could have a tremendous impact on energy efficiency if adopted on a large scale.

When it gets too sunny outside, most of us use blinds and curtains to keep things inside a bit cooler. In order to remove the human factor (and make cooling a home or office more energy efficient), some engineers have devised electrochromic windows, which darken when a small electrical potential is applied. You’ll find such windows on a Boeing 787 Dreamliner, for instance. Typically, electrochromic windows require a human to activate a switch, although some applications allow the windows to darken automatically in response to temperature read by a third-party sensor.

The problem with electrochromic windows is that they are quite expensive, not very durable, and have inconsistent light-blocking properties. There are, however, windows whose light-penetrating properties are tuned directly by temperature. Previous attempts involve films of vanadium dioxide, a thermochromic compound with sunlight-modulating properties. Its main drawback is that it becomes activated at temperatures in excess of 90 °C, which makes it impractical for real-world use. And when they’re not activated, they only allow little light to come through, having a transmittance of around 50% (semi-opaque).

Researchers now report a novel thermochromic system that is a lot more reliable than previous demonstrations and might actually be practical for widespread use in homes and offices. The smart windows developed by the MIT researchers are based on polymeric gel particles (microgels) trapped between two glass panels. These gels have an extremely uniform density and a structure that forces the particle to swell in water in response to temperature. At 25 °C, the microgel particles have a diameter of 1.4 micrometers, scattering very little light and making the window highly transparent. Above 32 °C, the microgels collapse and expel water, scattering light in the infrared red range (the kind we perceive as heat).

In experiments, the researchers showed that their system achieved an infrared transmittance of 81.6% in the inactivated transparent state, but only 6% when activated. As a result, the temperature inside a test chamber fitted with microgel-based smart windows had a significantly lower temperature compared to a chamber fitted with standard double-pane windows. The smart windows had no noticeable loss in performance after switching between states more than 1,000 times. They’re also not affected by freezing. Finally, the microgels and window assembly are not prohibitively expensive, making the technology promising for real-world applications.

The major drawback is that once activated, the gels make the window relatively opaque because they also scatter ultraviolet and visible frequencies in the spectrum of light. Another drawback is that in the evening, because it’s cool outside, the windows remain fully transparent, reducing privacy. The whole idea is to stop using curtains, so as they stand today, these sort of smart windows may not be practical in all situations.

The system was described in the journal Joule.

MIT researchers creatively used  electrochromic materials which change colour and transparency in response to an applied voltage to design a new class of self-shading windows. When an electrical current is applied, the windows can swiftly change from transparent to opaque, or vice-versa. The power required to trigger the change is minimal. Moreover, to remain in a certain state, no power is required.

Curtains are so last century

Electrochromic windows aren’t exactly new. The Boeing 787 uses these materials for its cabin windows to prevent bright sunlight from glaring the crew. When the voltage is turned on, however, it takes good a couple of minutes before the windows go dark.

This happens because it takes time for the electrons in the material to change charge. To create a colour-changing effect, positive ions need to move through the material, but these move far slower than electrons. Also in regard to previous self-shading windows like those in the 787, MIT’s professor of chemistry Mircea Dincă and lead researcher of the current paper, says these sort of materials don’t change completely from transparent to black.

To make a self-shading window that transforms fast and completely between transparent and opaque, the MIT team used sponge-like materials called metal-organic frameworks (MOFs). These materials conduct both electrons and ions at high speeds and have been used previously by Dincă’s team to make them turn from clear to shades of blue or green. Now, their new material made by mixing an organic material and a metal salt, completely blocks or lets light pass through.

“It’s this combination of these two, of a relatively fast switching time and a nearly black color, that has really got people excited,” Dincă says.

Besides avoiding glare, the new material could prove very useful if incorporated into residential or industrial windows. Just by flipping a switch, you can make the windows let less light through which might save a lot of energy by offsetting air conditioning. Once the sun is ready to set, you can adjust the windows to let sunlight through so you don’t need to turn on the artificial lights.

What’s really interesting is that preliminary tests show only an initial voltage needs to be applied to change the opacity of the windows. No further power is required for the material to maintain its current state. Power is required only when the user wants to revert the material to its former state, whether transparent or opaque.

The results were published in the journal Chem.