Wi-Fi just got way more faster. A team of researchers from the Fraunhofer Institute for Applied Solid State Physics just beat the previous record by a factor of 10.

In order to achieve this feat, they used signals in the 71–76 GHz radio frequency band to send the data. This frequency is used mostly for terrestrial and satellite broadcasting. To make things even better, they achieved an impressive signal-to-noise ratio, avoiding bandwidth waste. According to Gizmodo, they devised a system of ultra-efficient transmitters and receivers. The transmitters are based on semiconductor chips made gallium-nitride, which provide a high-power signal that’s transmitted from a focused parabolic antenna. The team declared:

“Transmitting the contents of a conventional DVD in under ten seconds by radio transmission is incredibly fast – and a new world record in wireless data transmission. With a data rate of 6 Gigabit per second over a distance of 37 kilometers, a collaborative project with the parti­ci­pa­tion of researchers from the University of Stuttgart and the Fraunhofer Institute for Applied Solid State Physics IAF exceeded the state of the art by a factor of 10.”

They transmitted the data between a 45-story tower in central Cologne and the Space Observation Radar in Wachtberg, 23 miles away.

This improvement in technology and infrastructure has obvious applications. We can all appreciate some faster internet, but it could be even more useful in places where wired connections simply aren’t possible, or for emerging technologies around the Internet of Things and Industry 4.0.

Wi-Fi use can account for up to 60 percent of the phone’s total energy consumption. Even if you aren’t actually connected to a network, having it on will drain a lot of energy because the device is constantly searching for a signal. University of Washington researchers want to flip Wi-Fi energy use upside down. They’ve invented a new protocol and technique that uses 10,000 less energy. The same signal can be used to power devices without the need of an external power source. Cameras, temperature or motion sensors can all be power and connected to the internet at the same time using ‘passive Wi-Fi.’

Wireless electricity is far from new, but getting a device to also communicate is a bit more challenging. The team showed that it’s possible to turn weak signals into power and also communicate through a process called backscattering. The gist is that an additional device is used to reflect incoming radio waves from a source, and it’s this reflected signal that’s picked up by the devices. This is how an RFID chip inside a contactless card works. But a key difference is the technology developed at University of Washington doesn’t need a special device to read the signal, as is the case of contactless cards.

For instance, one version of the tech developed by the researchers called ‘passive Wi-Fi’  lets battery-free gadgets connect with conventional devices such as computers and smartphones by backscattering Wi-Fi signals.

There’s a digital and analog side to radio transmission. While the digital side has become extremely energy efficient in the past two decades, the same can’t be said of the analog side. So, what the researchers did was effectively decouple the analog and the digital signals. The Passive Wi-Fi architecture assigns the analog, power-intensive functions – like producing a signal at a specific frequency — to a single device in the network that is plugged into the wall.

In Passive Wi-Fi, power-intensive functions are handled by a single device plugged into the wall. Passive sensors use almost no energy to communicate with routers, phones and other devices. Image: University of Washington

Next, an array of sensors produce  Wi-Fi packets of information using very little power by simply reflecting and absorbing that signal using a digital switch. Prototype passive Wi-Fi devices have transfered data as far as 100 feet and made connections through walls. Data was transferred at 11 megabits per second.

“All the networking, heavy-lifting and power-consuming pieces are done by the one plugged-in device,” said co-author Vamsi Talla, an electrical engineering doctoral student. “The passive devices are only reflecting to generate the Wi-Fi packets, which is a really energy-efficient way to communicate.”

“Our sensors can talk to any router, smartphone, tablet or other electronic device with a Wi-Fi chipset,” said co-author and electrical engineering doctoral student Bryce Kellogg. “The cool thing is that all these devices can decode the Wi-Fi packets we created using reflections so you don’t need specialized equipment.”

The system uses  10,000 times less energy than conventional methods, and uses a thousandth as much power as the Bluetooth LE and ZigBee communications standards.

“Even though so many homes already have Wi-Fi, it hasn’t been the best choice for that,” said co-author Joshua Smith, UW associate professor of computer science and engineering and of electrical engineering. “Now that we can achieve Wi-Fi for tens of microwatts of power and can do much better than both Bluetooth and ZigBee, you could now imagine using Wi-Fi for everything.”

Passive Wi-Fi was  named one of 10 breakthrough technologies of 2016 by MIT Technology Review.

Researchers at MIT have developed a device that can track human silhouettes behind walls using Wi-Fi. The device called RF-Capture emits out Wi-Fi signals and then tracks back the reflections and see if together, they piece a human form. 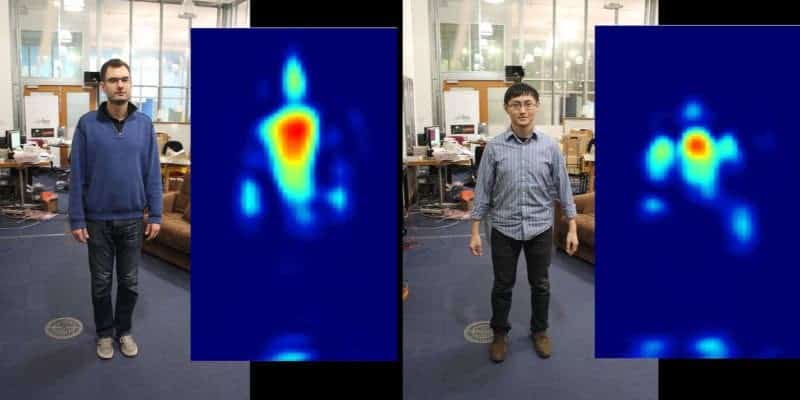 This is what the RF-Capture “sees”. Note that it only detects some parts of the human body. Image credits: MIT.

Wi-Fi is a local area wireless computer networking technology that allows electronic devices to connect to each other, generally using the 2.4 gigahertz (12 cm) UHF and 5 gigahertz (6 cm) SHF ISM radio bands. But Wi-Fi can do more than create networks and connecting you to the internet – as a new study just showed, it can send out a signal and reconstruct what’s “on the other side” – see what reflected the signal back. This can generally be done with every type of wave, but high frequency waves provide better resolution and Wi-Fi is a cheap and generally available technology, which makes it more attractive to use.

Here’s how this works: RF-Capture is placed in a room, and starts emitting signals; a part of the signal bounces back off the walls, but some of it passes through and gets to the neighboring room. If someone is walking in the neighboring room, then the signal is again reflected by the human body and returns to the Wi-Fi device; only some of the body parts create significant reflections. The technology could be used in the houses of elder people or people with disabilities to see if they have fallen or if they are injured and need help. It can also be used in smart homes, to detect movements that control the appliances in the house. It can identify people and see if they are making certain gestures. Here’s a video showing how it works:

How it works. Image via MIT.

The sensibility is absolutely amazing! Being able to detect movements with the same accuracy as a kinect camera placed right in front of the subject is absolutely spectacular.

The concept itself is not new – it’s something that has been used in geophysics for decades, for example in ground penetrating radars, a technology that can detect buried near-surface objects. But the application is entirely different, and holds a lot of potential, because Wi-Fi is basically ubiquitous in the developed world.

Starbucks is considered a mammoth in this industry. The company has its humble beginnings in Seattle as a coffee retailer. Today, this is the most successful coffee house chain in the world with over twenty thousand stores globally. Part of its marketing campaign is providing free Wi-Fi connectivity to its users. AT&T has been its Internet provider since 2008, but recently, it announced that its stores will now have its Wi-Fi service from Google. How will this change impact its current market?

Google connection that will be installed in Starbucks will be blazing like the speed of lightning. Claims say that this will be 10 times faster than the one offered by AT&T. Those who will be receiving Google fiber service will even get to enjoy the Internet speed that is a hundred times better than the system it will replace. When it comes to coffee shops, it is now very common for one to have free Wi-Fi connectivity. However, these will never be made equal. Some will offer better connection than others. Many people like to enjoy their cup of coffee in front of their gadgets like laptops, tablet and Smartphones.

Starbucks Ahead of Competitors

If the Internet speed can live up to their claims, then many people will be attracted. Who does not enjoy free Wi-Fi connection and on top of that, you can browse through web pages without the annoyance of lagging? Even if you do offer free Wi-Fi service, if people who connect to your network will have trouble even opening simple applications from providers on their Smartphones, people may not want to come to your store for a second visit. Some people buy from coffee shops not because they only want to have a sip of premium coffee, they are also in it for the free Internet. Most people who buy expensive coffee are those from the working class. These are the people who bring their work with them everywhere they go. If they sit down at your coffee shop and open their communication gadgets, they could be doing their work. Many people are tied to their work and if Starbucks offers better Internet connections through Google’s Wi-Fi compared to its competitors, then it could easily get some of their customers to come into their stores.

Starbucks Can Better Serve the Community

Starbucks does not only attract the working class. Students also come here to do their assignments. Although schools do have Internet libraries, some of these have restrictions to the content that you can view. With better Wi-Fi connection, Starbucks stores can be an avenue where students can make use of their laptops to broaden their knowledge. In a sense, the better Internet connection of Starbucks can also breed the minds of the future leaders of the community. If disasters strike such as hurricanes, this coffee shop can be used to connect to families if Internet connection at home becomes interrupted.

Not Just the Internet

Of course, the free Wi-Fi connection is just part of the success of Starbucks. The store has come far to what it is today because it offers quality service and they keep their employees happy by giving them health insurance; something that other companies do not offer. This may be the reason why employees are motivated to do their best whenever they are serving you an espresso or a latte. They are also finding ways to make the buying experience more convenient for their customers. They make sure that your coffee is served in less than five minutes and you can now pay for your order at a Starbucks outlet with the use of your Smartphone. Combine great coffee, outstanding customer service and super-fast Internet connection, what you have is a powerhouse coffeehouse.