Five years of trekking on Mars have taken their toll on Curiosity, and on Tuesday NASA announced the first two fractures in the rover’s wheel treads. 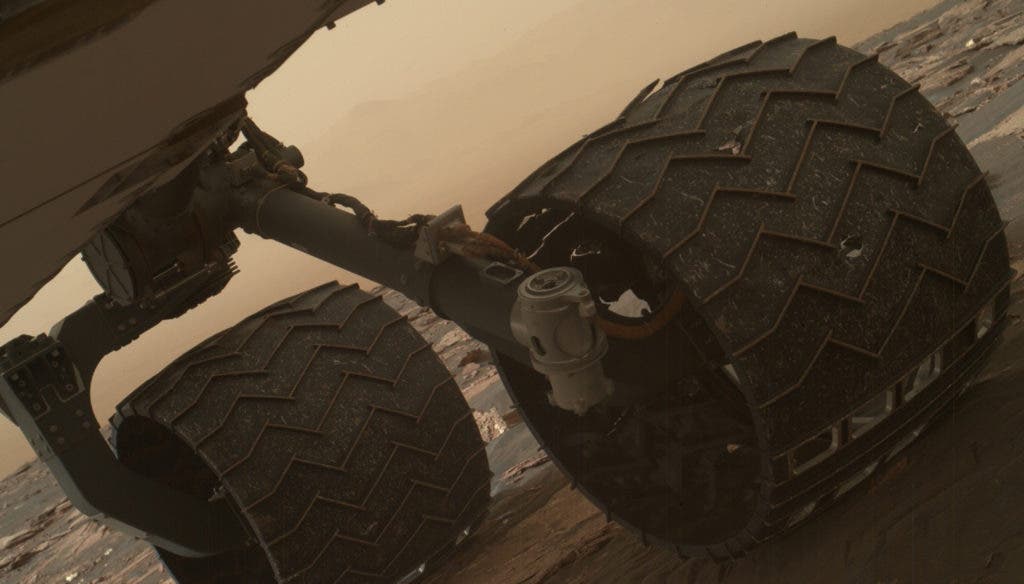 Carried forth by its six aluminum wheels measuring 20 inches in diameter and 16 inches across (50 cm/40.5 cm), Curiosity has been nosing about Mars since August of 2012 for us Earth-locked humans. But five years and 10 miles (16 km) on the maybe-red planet are taking their toll on the intrepid explorer, whose half-as-thin-as-a-dime aluminum wheels are starting to show signs of wear and tear, NASA said.

The damage consists of breaks in two of the bot’s zigzagy grousers/treads, 19 of which cover each wheel. These grousers extend from the wheel by roughly one quarter of an inch (0.6 cm), giving the wheels enough purchase in the Martial soil to carry the almost 2000-pound-heavy rover around. According to NASA, the grousers broke sometime between January and March, both on the left middle wheel.

Ten miles seems like a short distance for a wheel to break, but it took the rover a few years to travel that much — a few years of super slow rolling over sharp, jagged rocks. In fact, Curiosity has already been at work for twice as long as the mission it was designed for, so if anything the rover is admirably sturdy. It’s due to this long operational history that NASA has been monitoring its wheels in the first place, as years of facing martian rocks has left them quite worse for wear.

So, is this how Curiosity meets its end? Forever turning sleek wheels in the red sands, praying/beeping for traction but finding none? Well, possibly. But not today! Wheel longevity testing on Earth “initiated after dents and holes in the wheels were seen to be accumulating faster than anticipated in 2013” by the agency shows that “when three grousers on a wheel have broken, that wheel has reached about 60 percent of its useful life.”  With only two damaged grousers, the wheel is probably around 50 percent into its lifespan, or roughly around that mark.

Overall, it’s not that bad. Curiosity is well beyond 50% of its journey, so one wheel on a 50% life bar is actually pretty good. Right now, the rover is climbing up Mount Sharp to obtain records of Mars’ climate from rock samples but if the ground tests are anything to go by, the wheels should still hold their own against the martian soil.

“This is an expected part of the life cycle of the wheels and at this point does not change our current science plans or diminish our chances of studying key transitions in mineralogy higher on Mount Sharp,” said JPL Curiosity Project Scientist Ashwin Vasavada.

Curiosity will stop on the way to check out some hematite formations (an important iron ore), a clay formation on top of that, and a structure rich in sulfates which tops the whole thing — formations whose chemistry might hold evidence of liquid water in Mars’ past or today. The journey should take less than five miles in total (an estimated 3.7 miles / 6 km,) so the rover will have some to spare after the climb.

Still, it’s a sad reminder that one day even our favorite rovers will break down. Until then stay strong buddy, we’ll find you some new wheels.