Kidney stones are actual stones, in the geologic sense of the word, new research reveals. 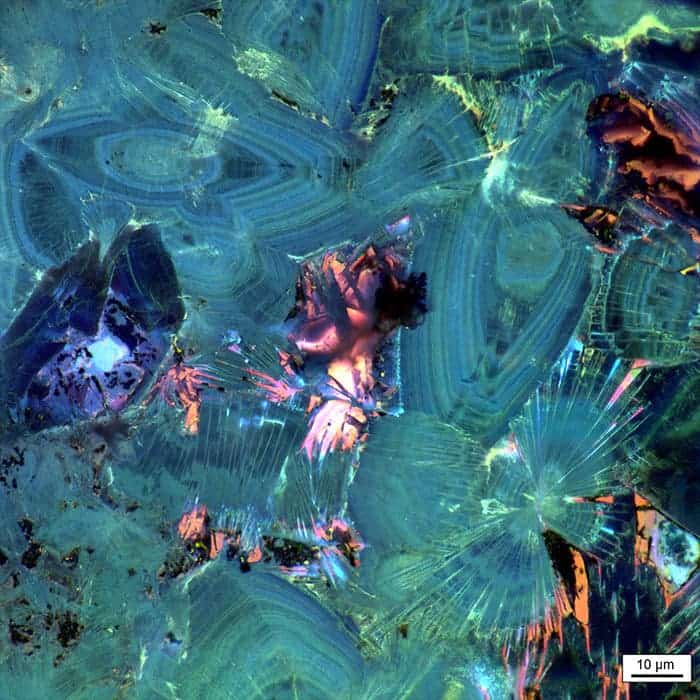 The combined efforts of an interdisciplinary team — which included a geologist, a microscopist, and a medical doctor — revealed a surprising trait of kidney stones. These lumps of matter, traditionally believed to be homogenous elements, actually form layer-by-layer, just like any other natural or artificial mineralization.

More crucially, however, the team reports that kidney stones partially dissolve and regrow throughout their lifetime — a discovery that may unlock new, noninvasive treatments for these hurtful pebbles.

Kidney stones are built up from calcium-rich layers that bear a striking resemblance to other mineralizations in nature, such as those forming coral reefs, Roman aqueducts, stalactites or stalagmites, structures associated with hot springs, or subsurface oil fields, the team reports. This goes directly against the common-held wisdom that kidney stones are unique among all other rocks in nature, being homogenous and never dissolving.

“This means that one day we may be able to intervene to fully dissolve the stones right in the patient’s kidney, something most doctors today would say is impossible.”

The team’s findings were made possible by new imaging technology. This allowed the authors to look at the stones in better detail than ever before, and also employ a wider array of light- and electron-based microscopy for the task. To give you an idea of how extensive the microscopy effort was as part of this research, the methods applied by the team included: bright-field, phase-contrast, polarization, confocal, fluorescence and electron microscopy, several combinations of these methods, topped off with X-ray spectroscopy.

What’s really exciting to me personally, given my background in geophysics, is that many of these imaging techniques are traditionally the domain of geology and other earth sciences. While common-place in such fields, they haven’t really been used to study mineralizations in living organisms, such as kidney- or gallstones, Fouke remarks.

The team’s use of ultraviolet light during imaging was also particularly helpful, he adds, as the technique makes certain minerals or proteins fluoresce at the right wavelengths — allowing for quick and accurate identification of these elements under the microscope. A relatively new technology, Airyscan super-resolution microscopy, also allowed the team to snap some incredible, 140-nanometer resolution shots of the kidney stones’ structures: 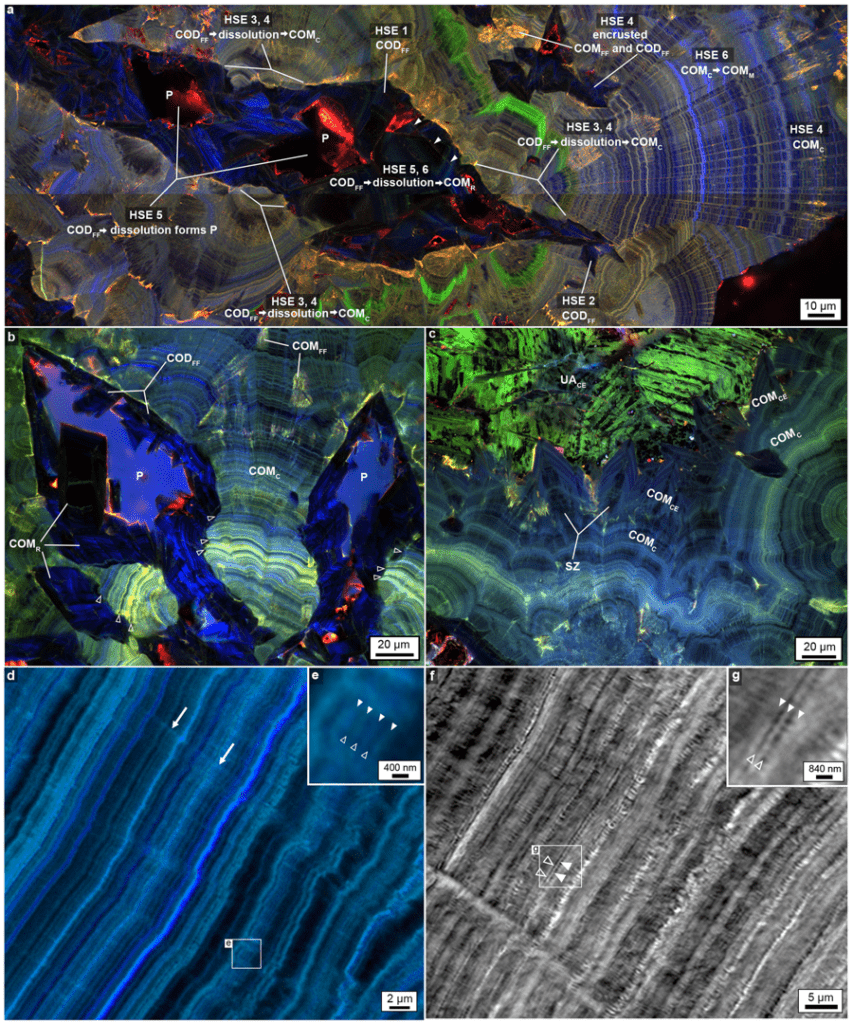 “Instead of being worthless crystalline lumps, kidney stones are a minute-by-minute record of the health and functioning of a person’s kidney,” Fouke explains.

The images reveal that kidney stones start out as tiny crystals of calcium oxalate dihydrate, a mineral known as Weddellite. These crystals may lose some water, depending on conditions in the body, transitioning into calcium oxalate monohydrate (mineral Whewellite). And yes, they do sound a bit like Pokemon names.

In the early phases of kidney stone formation, these crystals bind together into irregular clumps. Organic matter and other mineral species later cake onto this core in successive layers, creating an outer shell. The process is very well known to geologists.

The presence of these layers also allowed the team to recreate the developmental history of the kidney stone, just like you would with a geological structure. Gaps in these layers point to certain parts of the stones — usually the interior dihydrate crystals — having dissolved in the past, the team reports. These gaps were subsequently filled, usually by calcium oxalate monohydrate crystals. 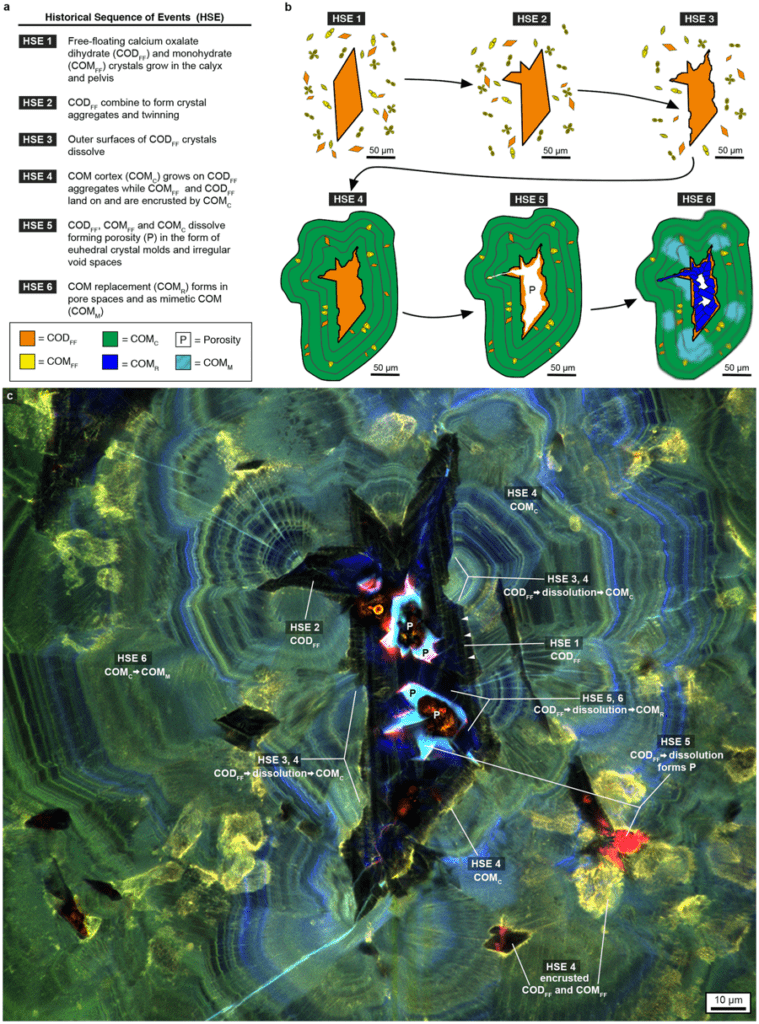 “In geology, when you see layers, that means that something older is underneath something younger,” Fouke said. “One layer may be deposited over the course of very short to very long periods of time.”

“Therefore, just one rock represents a whole series of events over time that are critical to deciphering the history of kidney stone disease,” Fouke said.

The research shows that, far from being a single lump of stable crystal, kidney stones are actually a hodge-podge of whatever minerals and organic substances happened to trail along the kidney during the stone’s lifetime. They are also very dynamic, evolving continuously, potentially encasing a history of the body’s going-ons over time.

“Given these rough estimates, each nano-layer may have formed on a sub-daily basis of hours or in some cases even minutes,” the paper reads.

“If correct, kidney stones could be ‘read’ in the future under clinical conditions as an unprecedented ultrahigh-sensitivity record of in vivo human renal function and dynamic biogeochemical reactions.”

The paper “Geobiology reveals how human kidney stones dissolve in vivo” has been published in the journal Nature.