Just yesterday we were telling you about a change in diet 3.5 million years ago, modifying the way our hominid ancestors evolved and, in turn, how we evolved. Now, we’re moving a little closer to the present day – researchers calculating the barium levels in fossil teeth claim that they’ve found a difference in the way humans and Neanderthals were breastfeeding their babies. 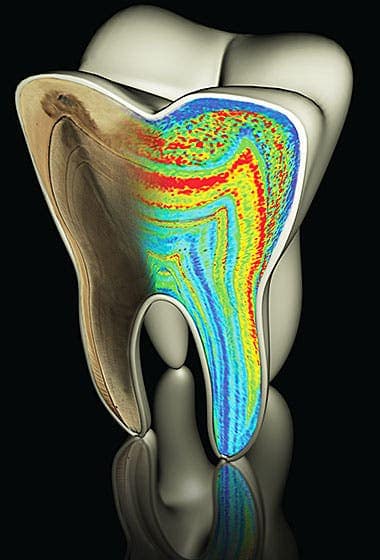 Image by Ian Harrowell, Christine Austin, and Manish Arora
Molar tooth model with the cut face showing color-coded barium patterns merging with a microscopic map of growth lines, which have been accentuated to reflect their ringlike nature.

Tanya Smith, an associate professor of human evolutionary biology, and Katie Hinde, an assistant professor of human evolutionary biology, worked with colleagues at the Icahn School of Medicine at Mount Sinai in New York and Westmead Hospital in Australia found a correlation between barium levels in teeth and an increase in breastfeeding, confirming what many anthropologists already suspected. As they explain, barium levels can survive unhampered for thousands of years, meaning the test can show breast-feeding changes among both early humans and Neanderthals.

“There’s an ongoing debate about whether Neanderthal and contemporary Homo sapiens would have practiced different behaviors in terms of their breast-feeding,” Smith said. “People have speculated that an early weaning process in modern humans may have been part of their evolutionary advantage. We don’t have the data to answer that question yet, but we now have the method to be able to start collecting that data. It’s clear that there are developmental differences between Neanderthals and modern humans — we’ve amassed good evidence for that in the fossil record,” she continued. “What we haven’t been able to do is make a direct comparison using a biomarker like first reproduction age, or life span, or weaning age. That’s why this is so exciting, because now we can get at one of these ‘life history’ variables directly.”

But that’s not all they did – they calculated weaning age, taking advantage of the unique way in which teeth grow. Pretty much like trees, teeth grow in concentric layers – various substances (such as calcium, oxygen and small amounts of metal) get deposited in the tooth enamel. 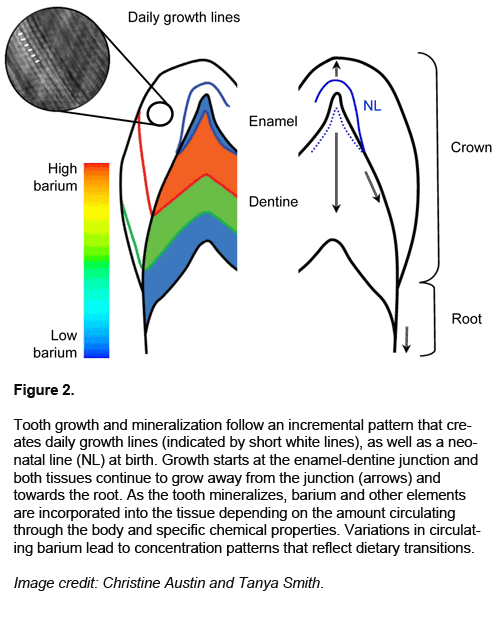 Using both chemical analysis and microscopic studies, they showed that initially, barium levels are very low, because very little of it passes through the placenta. Then, as the baby is born and is breastfed, the barium levels rise significantly, only to drop as he starts supplementing his meal with other foods. It then drops again, significantly, once breastfeeding is stopped. 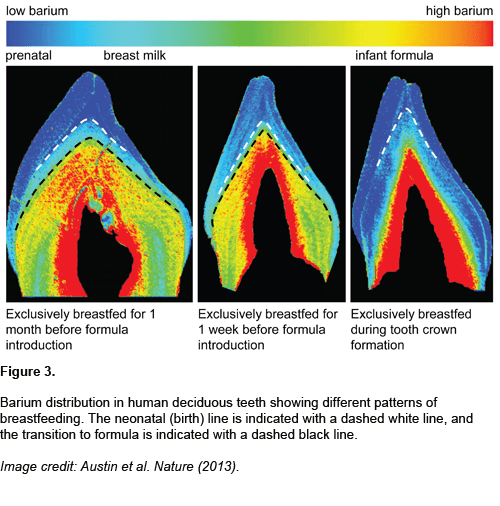 “We can see when the barium shows up in the tooth after birth, and we see it increase over time, because an infant will take more milk as they get bigger and more active, and then you see it drop off in this beautiful, inverted U-shaped function,” Hinde said. “This is a game-changer in many ways, because this will allow us to go to museum collections and look at this as a proxy for how much milk different infants got from their mothers and what their weaning process was like. We can now look at that within species, but we can also look at that among species. That will tell us about the evolution of how mothers invest in their young.”

Some researchers believe that this also provided an evolutionary advantage over the Neanderthals – one of the many things which ensured our survival as a species.

“This can give us a window into one aspect of life that may have separated modern humans from Neanderthals,” she said. “This topic has been debated for a long time in the scientific community. What does it mean that human and Neanderthal cranial development was different? What does it mean that their dental development was different? We haven’t been able to get at these questions in the fossil record, but now we can actually get at a real developmental benchmark. That’s why this is so exciting.”