For centuries, New Guinea natives have crafted bone knives and daggers used for hunting, fighting, and for ceremony. Most are made from the thighbones of cassowaries, which are large, ostrich-like birds. However, some of the daggers are made from human bone — specifically, the thighbone of an ancestor or highly respected member of the tribe — and these are remarkably resilient. In fact, some scientists actually measured the strength of human bone daggers and compared them to the cassowary variety, finding the former is almost twice as strong.

New Guinea tribes are no strangers to weird and peculiar traditions, to use a euphemism, at least to us westerners. Take the Edoro, for instance, an ethnic New Guinea tribe whose range comprises the southern slopes of Mt. Sisa, and who are famous to anthropologists for the ritual pedophilic homosexual acts they practice. The Etoro believe that young boys must ingest the semen of their elders daily from the age of 7 until they turn 17 to achieve adult male status and to properly mature and grow strong. What’s more, among the Etoro, heterosexual intercourse — which they believe makes men die early — is prohibited for up to 260 days of the year and forbidden in or near their houses and vegetable gardens. In contrast, homosexual relations — which the Etoro believe prolong life — are permitted at any time.

A more widespread practice among New Guinea tribes is crafting bone daggers. Nathaniel Dominy, a professor of anthropology at Dartmouth College, got the idea to investigate such weapons after he came across an impressive stash of daggers at the university’s Hood Museum of Art, which were carved out of cassowary and human thighbones. These were like exquisite works of art, featuring elaborate motifs carved into them.

Dominy claims that the daggers were used to kill or finish off victims wounded with arrows or spears, by stabbing them in the neck. There are also accounts from the 1800s and early 1900s that the bone daggers were used for mutilation and cannibalism, but such statements are difficult to verify. Dominy says that these old accounts made by outsiders, such as missionaries, are prone to exaggerations and cultural misinterpretations.

What’s certain, the researchers say, is that the manufacturing of the human bone dagger had a deep cultural significance. Typically, such a dagger was fashioned out of the thighbone of a very important person in the community, either the father of the warrior or some other respected person in the community. This way, the warrior carried the rights and power of the person from which the bone came.

“The human bone dagger is stronger because men gave it a slight different shape—it has greater curvature,” Dominy told AFP.

“We believe that such a shape was done deliberately to minimise the chance of the dagger breaking during fighting. And the reason that men engineered human bone daggers to resist breaking is because human bone daggers carried a lot of social prestige.” 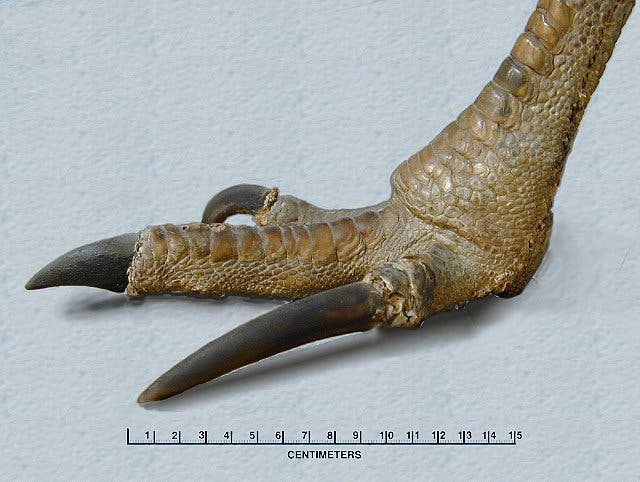 The most common type of New Guinea dagger, however, is made from the cassowary. Although it might look relatively harmless, don’t let its appearance deceive you — this is one of the most dangerous birds in the world. It’s the second heaviest in the world after its cousin, the ostrich, and each of its feet boasts a razor-sharp claw that can grow to 4.7 in. (12 cm) in length. With an agile kick, a predator can be easily maimed or killed. What’s more, the bird can jump almost 5 feet (1.5 m) high and can run up to 31 mph (50 km/h). So, it’s not very surprising that New Guinea locals used the cassowary’s claw to fashion daggers out of.

In order to see which of the types of daggers is stronger, the researchers performed computed tomography (CT) scans of five cassowary daggers and five human-bone daggers. The scans enabled the researchers to determine the density of each dagger. Apparently, both types of bones ‘are equally good for making daggers.’ However, when an additional cassowary-bone dagger — which was bought especially for this study — was destroyed in a bending test to see how much force it could take before breaking, the weapon proved far inferior to the human bone one. The test showed that the bird bone weapon could handle up to 44 lbs (200 newtons) of force before breaking, while the human bone dagger could withstand twice as much force. The researchers say that it’s likely that the human daggers are stronger because they crafted with greater care, seeing how they were a lot rarer and more valuable than the bird-bone daggers.

The findings were reported the journal Royal Society Open Science.