The Saharan silver ant (Cataglyphis bombycina) is the fastest ant found so far, a new study reports — and, relative to its body size, one of the fastest animals out there.

While birds do have a special place on the ‘fastest animals’ list, they also have the unfair advantage of being able to fly. If you only consider running speeds relative to body size, however, the ant is the third-fastest animal alive. First comes the Californian coastal mite (Paratarsotomus macropalpis) at 322 body lengths per second, and the a species of tiger beetle (Cicindela hudsoni) at 170 body lengths per second.

The ant’s incredible speed is an adaptation to its scorching home in the Sahara. While most animals there avoid going out during the day like the plague, the Saharan silver ant adapted to survive the burning sands. The ants have longer legs than their relatives to keep their bodies farther up from the sand and the heat it gives off. Their bodies also produce heat shock proteins before even leaving the nest, for maximum heat resistance. The ants are also able to track the Sun to help them navigate (so they spend as little time outside as possible), and are covered in hairs with a triangular cross-section that reflects and dissipates heat. Finally, they move really fast — also important when trying to get out of the sun.

Put all of these features together and the ants are able to go out in the baking desert sun for a few minutes at a time, scavenging carcasses for food.

To find out exactly how fast the ants move, biologists from the University of Ulm in Germany decided to film them using a high-speed camera. They first located a nest in the desert and attached an aluminum channel to the entrance, with a feeder at the end, to lure out the ants. In addition, the team carefully excavated a nest and brought it back to Germany, to see how the ants moved in cooler temperatures.

“After the ants have found the food – they love mealworms – they shuttle back and forth in the channel and we mounted our camera to film them from the top,” said biologist Sarah Pfeffer, first author of the study.

The team reports that the ants operate at maximum efficiency in the desert, reaching speeds of up to 855 millimeters per second. In the cooler environment of the lab, they would leisurely stroll around at 57 millimeters (2.24 inches) per second. The secret to their speed is in the gait, the team reports. The Saharan silver ant can swing its legs at speeds up to 1,300 millimetres per second and extends its stride from 4.7mm to 20.8mm as it reaches higher speeds.

At full gallop, all six of the ant’s feet hit the ground at once, and only stay there for around 7 milliseconds. The team believes this helps the ant keep its tiny ant feet cool and prevents them from sinking in the sand.

The paper “High-speed locomotion in the Saharan silver ant, Cataglyphis bombycina” has been published in the Journal of Experimental Biology.

A new study amassed “planetary-scale” data from people’s smartphones to see how active they are. They found that people from Hong Kong are the most active (6,880 steps a day), while Indonesians fared the worst (3,513).

In a world that’s struggling to deal with an obesity pandemic, day-to-day physical activity is an important and underrated way of losing some pounds and staying (at least somewhat) fit. With that in mind, Stanford Researchers used data from 700,000 people who used the Argus activity monitoring app, analyzing 68 million days’ worth of minute-by-minute data. They found that worldwide, people take an average of 4,961 steps a day. Generally speaking, eastern Europe and eastern Asia seem more active, with Indonesia, Pakistan, and the Arab peninsula being the laziest.

Of course, walking is just one measure of how active a country is. While walking is the most popular physical activity worldwide (though we don’t often think of it that way), the study fails to capture activities where it’s impractical to carry a phone (such as playing ball games or swimming), and other ways of physical locomotion (ie cycling). Still, it’s a trove of data, and by far the largest such effort undertaken so far.

“The study is 1,000 times larger than any previous study on human movement,” said Scott Delp, a professor of bioengineering and one of the researchers in the study. “There have been wonderful health surveys done, but our new study provides data from more countries, many more subjects, and tracks people’s activity on an ongoing basis. This opens the door to new ways of doing science at a much larger scale than we have been able to do before.”

As a notable counter-example, in Japan, where men and women exhibit similar levels of physical activity, obesity rates are very low. Researchers have some idea about why this is happening. Jure Leskovec, also part of the research team, explained:

“When activity inequality is greatest, women’s activity is reduced much more dramatically than men’s activity, and thus the negative connections to obesity can affect women more greatly.” 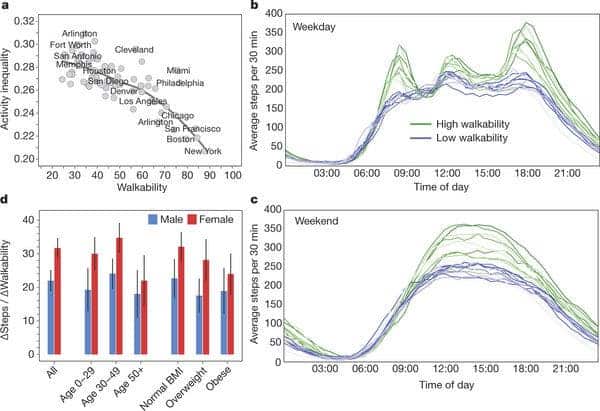 They also carried out an analysis of the city walkability. Not surprisingly, cities that were more walkable encouraged people to walk more and stay healthier. Walkability is a complex element, which gives scores from 1 to 100 to amenities (such as shops and parks) within a 0.25 to 1.5 mile radius and measures of friendliness to pedestrians, measuring factors such as city block length and intersection density. For the 69 cities in the USA with at least 200 users, walkability scores correlated with activity inequality, which in turn correlated with obesity. So if you want people to lose weight, make it easier for them to walk the city. It might seem like a no-brainer, but it’s good to have the big data to back it up.

Researchers actually hope their work can enable city officials and policy makers to make cities more friendly to pedestrians. Of course, curving down obesity will involve a broader approach, focusing on nutrition as well as physical activity, but walking is beneficial in more ways than one. Encouraging people to walk can make a great difference in a city’s health, also reducing emissions as a nice side effect.

As anyone who’s visited a big city knows, few things are more annoying than being stuck behind meandering tourists when you’re trying to get somewhere fast. Now, the British city of Liverpool has come up with an ingenious solution: fast walking lanes. 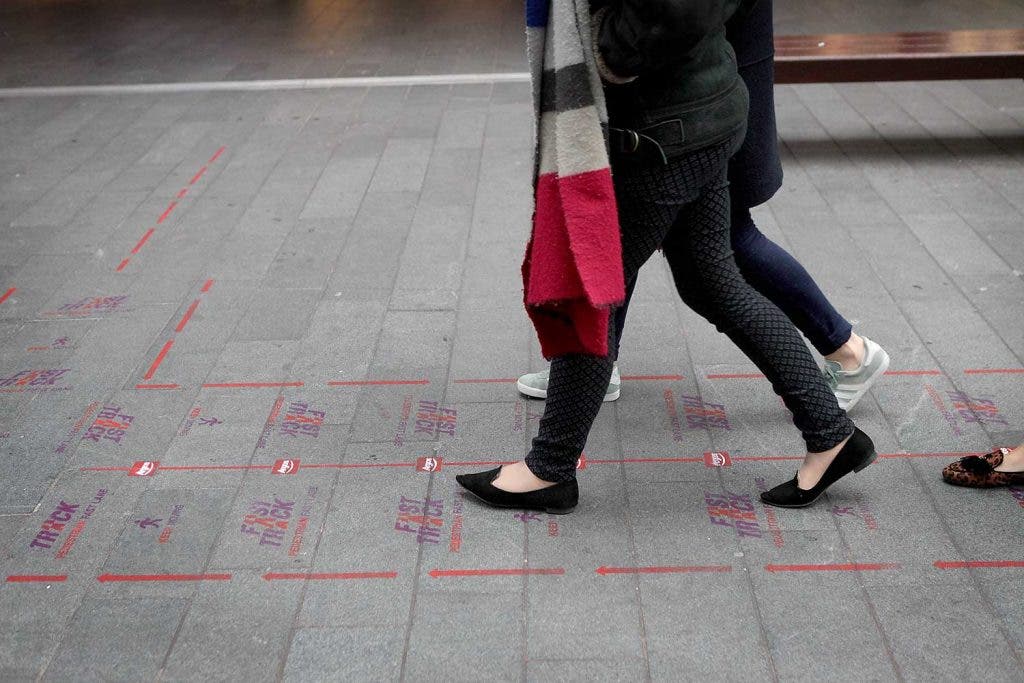 I often complain that crowded sidewalks are too difficult to navigate: you’ve got people strolling around, tourists, lovers holding hands, rushed businessmen trying to get to work, window shoppers, people talking on their phones… it’s a mosaic of different speeds and walking patterns, and it can be annoying for everybody. If you want to enjoy the view and smell the roses, it’s a complete moodkiller to see people rushing around you, and if you want to get somewhere fast, slow walkers can be quite a pain.

Retailer Argos conducted a study focused specifically on shoppers and window shoppers and found that for almost half of Brits (47%), slow walkers are the most annoying part of shopping – so they set up fast walking lanes. Sure, for now, it’s more a publicity stunt and it only exists in one place outside an Argos shop, but it’s a start. The fast walking lanes have been painted on the pavement, and create a walkway for those who want to power through the shopping centre and dodge the shopping crowd.

It seems that dividing sidewalks in one way or another is another step in creating optimized, smarter cities. In 2014, National Geographic created lanes on a city block in Washington DC in the US that divided pedestrians that were using a mobile phone from those that weren’t – but people didn’t really care about the guidelines. In Liverpool this can work, and if it can work for a shop, it could work for shopping-rich streets and then spread on.

“Shoppers have also told us that speed is critical when simply getting around the high street or town centre, so we want to test consumer reaction to a dedicated pavement fast lane,” independent retail expert Alastair Moore said in an interview. “The pedestrianised fast track lane is a great way of making this possible and with nearly 30 million Brits saying they’d like one on their own high street, the pilot is set to be a success.”

What do you think about this approach? Is it necessary and useful, or will it needlessly complicate pedestrian life even more?

If you find it hard to focus, you’re feeling a lack of enthusiasm or simply are stressed, a walk during lunch hours might do wonders for you. A new study has found that just with a walk, you could not only improve your physical health, but also raise your mood and fight stress.

Walking is good for you

Walking is good for both your physical and mental heath. Image via Kids Running Wild.

It’s no longer news that walking is good for you; nature walks especially are linked with lower depression and stress, and even creativity can be boosted with a walk. But science mostly focused on the long term effects and gradual outcomes, but this is one of the first studies to document abrupt, day to day and even hour to hour changes in people’s moods following walks.

For this study, researchers at the University of Birmingham first recruited sedentary office workers from the University and asked them to walk for 30 minutes during their usual lunch hour three times a week. In total, they recruited 56 middle aged men and women. Walking may not be something physically demanding, but for sedentary middle age people, it’s not easy either.

The volunteers first conducted a baseline set of tests to establish their baseline health and mood. All of them were out of shape, but generally healthy bot physically and mentally. Cecilie Thogersen-Ntoumani, the study’s lead author and now a professor of exercise science at Curtin University in Perth, Australia divided them into two groups – one which would start the walks right away, and the other one which would start the walks 10 weeks later, initially serving as a control group. After the 10 weeks, the first group was allowed to do as they please (walk or not), but most participants chose to continue the walking schedule.

They then tracked their mood with a specialized app that included a list of questions about their emotions. The questions were designed to see how the volunteers feel at the moment, including questions about stress, tension, enthusiasm, workload, motivation, physical fatigue and other issues. They were asked to answer questions right away, because recalling feelings after a while is much less reliable.

People who walked reported significantly different results from those who didn’t. Walkers reported feeling more enthusiastic, less tense, and generally more relaxed and better able to deal with whatever the afternoon would bring. The study didn’t directly measure their productivity, but it makes sense that more relaxed and less stressed employees are more productive.

“There is now quite strong research evidence that feeling more positive and enthusiastic at work is very important to productivity,” Dr. Thogersen-Ntoumani said. “So we would expect that people who walked at lunchtime would be more productive.”

To make things even better, when health tests were conducted after the study, those who walked more showed better fitness.

So, the takeaway message is: if you have a sedentary job, if you spend most of the day at an office or sitting down someplace, an afternoon walk can do wonders for both your physical and mental health; it will also improve your mood.