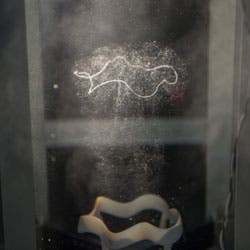 A vortex loop begins to form a knot during a demonstration in the physics laboratory of Asst. Prof. William Irvine. (c) Robert Kozloff

Researchers at University of Chicago have managed the difficult task of tying water vortex loops into knots, a feat akin to tying a knot out of a smoke ring. The implications of their research might further our understanding of physics and how the universe works.

Knotted vortices have been theorized for well over a century, since the days of Lord Kelvin who was among the first to study the phenomena. While the principle of such a phenomenon has been known for a very long time, physicists up until now had failed to recreate them in the lab because of their instability.

“They seem to break up in a particular way. They stretch themselves, which is a weird behavior,” said Dustin Kleckner, a postdoctoral scientist at UChicago’s James Franck Institute.

To form knotted vortices, the scientists had to overcome a number of challenges, in particular the “reconnection events” behavior. If you ever tried to merge two smoke rings for instance, you might have seen how loops circulate and collide, but instead of merging connecting vortices annihilate each other, changing their configuration from linked or knotted into one that is unlinked or unknotted.