Using two sets of electrodes, scientists have successfully restored finger movement in a paralyzed patient for the first time in history. The results could be the starting point to developing methods that would allow people around the planet to regain limb mobility. 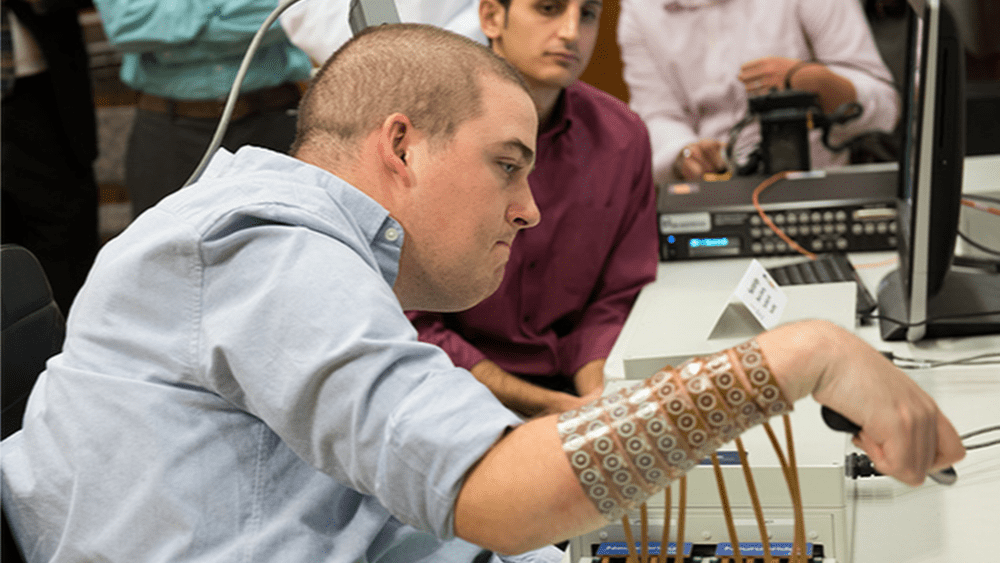 Four years ago, Ian Burkhart lost the ability to move his arms and legs. Now thanks to a neural implant and electrodes on his forearm, he’s able to move his wrist, hand, and fingers.
Image credits Ohio State University Wexner Medical Center/ Batelle

There are roughly 250,000 people living with severe spinal cord injuries in America alone — people who have to manage going through life with little or no mobility. One such man is 24 year old Ian Burkhart, who lost the ability to move or feel from the shoulder down in a diving accident four years ago. But, thanks to a team at Ohio State University, Ian became the first to regain control over his body. By using electrodes to bypass his damaged nerve pathways, the researchers allowed him to move his right fingers, hand and wrist.

“My immediate response was I want to do this,” said Ian after the four-hour procedure of inserting the electrodes into his brain . “If someone else was in my place, with the possibility of changing my life and people like me in future, I would hope they would agree.”

The first step was to implant an array of electrodes into Burkhart’s left primary motor cortex, an area of the brain that handles planing and directing movements. Signals generated in his brain were recorded and fed through a machine learning algorithm. It took almost 15 months of three training sessions each week to teach his brain to use the device. But finally, the software started to correctly interpret which brain waves corresponded to which movements.

Now, when Burkhart’s brain emits the proper signals, the implant sends these impulses through wires to a flexible sleeve — lined with electrodes — placed around his wrists to stimulate his muscles accordingly.

The researchers tested Burkhart’s ability to perform six different hand, wrist and finger movements. An algorithm determined that Burkhart’s first movements were about 90 percent accurate on average.After his muscles got some exercise and improved their strength, Ian successfully poured water from a bottle into a jar and then stirred it. He was also able to swipe a credit card and even play some Guitar Hero.

The team notes that in its current form, the technique is highly invasive, meaning it might not be suitable for patients who are already in poor health or have compromised immune systems; They also point out that the device they used in this study allows for a greater range of movement than typically available neural bypass devices. Finally, the implant doesn’t restore a patient’s ability to feel — prosthetics might be able to solve that problem though.. Maybe someday the two technologies could merge to give patients both the ability to move and to feel.

Still, the study is a huge stepping stone. The way Burkhart was able to move his hand is simply mind blowing, and something considered impossible up to now. That could have big implications if the technology becomes used widely.

“Our goal was to use this technology so that these patients like Ian can be more in charge of their lives and can be more independent,” Ali Rezai, one of the researchers involved in the study, said in a statement. “This really provides hope, we believe, for many patients in the future.”

The team hopes to have their system refined and ready for wide-scale implementation in a few years.

The full paper, titled “Restoring cortical control of functional movement in a human with quadriplegia” has been published in the journal Nature and can be read here.