Viscosity is a liquid’s property of resisting deformation, such as flow. At home, you probably know this property as the ‘thickness’ of a fluid. The word comes from the Latin word “viscum”, meaning ‘mistletoe’, the berries of which were used in ancient times to create glue.

Viscosity can be a weird concept to wrap your head around, because it makes fluids act not like fluids. Such a large part of our intuitive understanding of fluids relies on them behaving a certain way. Water, the quintessential liquid, flows immediately when poured; it takes the shape of its container, and if there’s no container, it spills everywhere. It gets absorbed by sponges or soil; it bubbles with gusto when boiling.

On the other hand, pitch can easily be confused for a solid. Because it’s so highly viscous, it barely flows, has quite an easy time maintaining its rough shape, and barely percolates through either soil or sponges.

So let’s see what this property which makes fluids un-fluid-like is.

The source of viscosity

In strictly physical terms, viscosity is a fluid’s shear stress over its shear rate, and is expressed in poise (P), a measure of pressure per second. It shows how much force per unit of area you need to apply to make a fluid move (shear stress) and how the internal layers of that fluid will move in respect to one another (shear rate).

In short, it shows how much energy you need to apply to make a fluid flow. The field of science that studies the flow patterns of matter is called rheology from the Greek term “rheo”, meaning ‘flow’.

Viscosity is the product of internal friction between the fluid’s molecules. Both gases and liquids have viscosity, but the molecules in liquids are packed in more tightly — making them interact more and, thus, have higher viscosity than gases.

Shear rate is important in this equation because it describes how successive ‘layers’ of molecules in fluid interact with one another. A great way to see it in action is to try pouring honey out of a jar. It flows much more slowly than water because it is more viscous than it. But you’ll also notice that the honey in the center will flow out before the honey on the sides of the jar does as well.

This is due to the friction between the layers we mentioned earlier. Honey molecules that are right next to the glass will be attracted to the molecules in glass strongly enough that they’re basically stationary (solids are dense bunches of immobile molecules). They will generate friction with other honey molecules, in turn.

Friction always opposes the direction of motion so, in effect, this stops the fluid from sliding off the glass. Further layers of honey also experience friction, but against layers of fluid that are more mobile than the glass — so there’s less friction. Keep the model going and honey right in the middle of the jar will be most flowy because it’s experiencing little friction (against other relatively mobile molecules of honey).

It doesn’t only slow down pouring fluid — viscosity also prevents objects from passing through. A spoon will go through water with almost no effort, but not so through honey.

A good way to think about viscosity is that all the molecules in a fluid have hands, and they’re using them to hold onto their neighbors. The better these molecules can latch on, the more viscous the substance will be. In physical terms, these hands make up the cohesive force, being generated by chemical and physical interactions between molecules.

True solids cannot be vicious. In solids, molecules cannot really move in relation to one another. If one moves, they all move, or break apart. Since viscosity is defined in relation to flow (where particles move independently from one another), it can’t by definition be applied to a true solid. It would be like trying to define what light tastes like. That being said, not all fluids are born equal in regard to viscosity.

The most common class of viscous material you’ll encounter are Newtonian fluids. These always behave like fluids should, having a relatively constant viscosity. Although their resistance to flow does increase as more force is applied, this is proportional to the force being applied. Newtonian fluids, for all intents and purposes, keep acting like fluids no matter how much force you exert on them.

Air is a Newtonian fluid, although viscosity has no bearing on the speed of sound through air.

Electrorheological and magnetorheological fluids increase their viscosity in the presence of electrical and magnetic fields respectively and can become near-solid under the right conditions, and quickly reverting back to a liquid if needed.

What has viscosity ever done for you?

Perhaps one of the most important impacts viscosity has on our lives is in our biology. The size, shape, and structure of our hearts, circulatory system and virtually every other tissue, as well as the structures and functionality of our cells, are all shaped to take advantage of or work around viscosity. Our immune system relies in no small part on our lymph channels. Lacking the propelling power of our heart, lymph vessels have to be designed around the viscosity of lymph to keep everything in working order.

Each morning, when you go brush your teeth, it’s viscosity preventing the paste in the tube from splattering everywhere. Without viscosity, your ketchup would drain out of the bottle almost instantly, and the lubricants in your car wouldn’t be able to coat (and thus, lubricate) anything.

Viscosity is what makes liquids want to pool together, and it was a key player in applications such as pill manufacturing. Industries involved in the production of food, chemicals, adhesives, biofuels, paints, medicine, and petroleum processing all keep a close eye on the viscosity of their products.

Finally, viscosity is always affecting us, although we’ve evolved to not feel it. But whenever you make even the slightest of motions, the air’s viscosity works against it — it produces ‘air drag’. Swimming, too, lets you experience a somewhat more concentrated flavor of viscosity.

Personally, I find that processes happening mostly in the background of our awareness, the unsung underdogs of physics (such as viscosity) are the most fascinating ones to study. We may take them for granted, we may not even be aware they exist, but they silently play a part in everything we do. Even a ‘humbler’ one, like viscosity, has directly shaped life on Earth into what it is today. 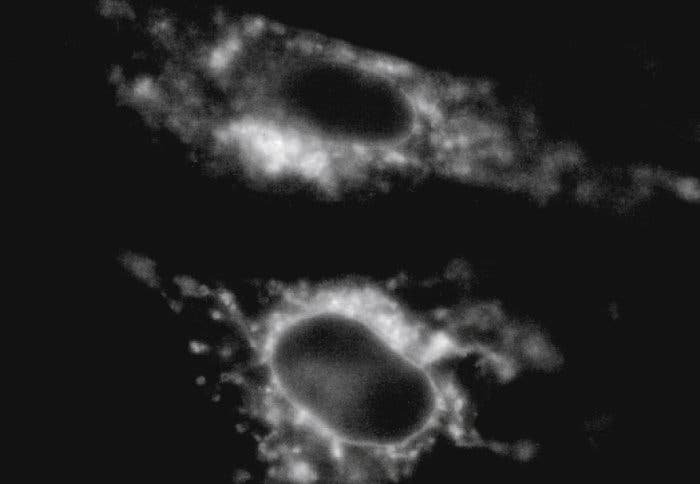 Researchers from the European Space Agency (ESA) and Imperial College, London report that as gravity increases, cells develop more viscous membranes to hold their shape — similar to developing a “thicker skin”. This study is the first to document the changes in cell membrane viscosity that occur at higher and extreme gravities.

“Studying how cells adapt to extreme gravity helps us understand how cells can resist environmental stress in general—from viral attacks and chemical imbalance to extreme cold and extreme heat,” says Dr. Nick Brooks, co-author of the study and Senior Lecturer in the Department of Chemistry at Imperial.

“Another really exciting thing was showing we could do it. Actually being able to conduct detailed microscopy experiments inside of a centrifuge which is spinning at 15g is not very easy.”

Using the European Space Agency’s (ESA) Large Diameter Centrifuge in the Netherlands, the team pitted living cells against a gravitational force 15 times stronger than Earth’s (i.e. 15g). As gravity increased, so did cell membrane viscosity, the team reports. These results may not sound like much, but the authors note that membrane viscosity is an important parameter for cells, as it controls how quickly some key reactions occur — and, indeed, if they can take place at all.

The findings may help us develop better treatments for diseases like diabetes and Alzheimer’s that can change the viscosity within cells. They also simply help us better understand how cells go about their routine lives.

The study was led by Imperial Ph.D. graduate Emma Woodcock as part of the Spin Your Thesis! competition that gives students access to the ESA’s centrifuge — a four-armed, eight-meter in diameter spinning beast. Her study brought together Imperial chemists, physicists, and ESA scientists. At full speed, the centrifuge can spin containers at the ends of its arms at 101km/hour, roughly 60mph. Simulated gravity inside these containers can reach up to 20g. The most powerful simulated gravitational force you likely experienced was on a rollercoaster ride; to give you some context, the most powerful rollercoasters today only touch the 5g mark for a few seconds at a time.

The team made several impressive advancements for this study. They successfully secured a camera and microscope inside the containers and managed to keep them properly focused throughout the experiment. Dr. Marina Kuimova, one of the paper’s co-authors and an Associate Professor in the Department of Chemistry at Imperial also developed molecules that would light up as viscosity in the cellular membranes increased. These molecules have a spinning axis that rotates faster in low viscosity but becomes progressively stalled as the membrane stiffens. When not spinning, it emits bright fluorescent light — and the light it emits is reliable and stable enough that the team could measure it to see how fast the molecule was spinning. This method doesn’t chemically interfere with the cell in any way, making it very promising for future research of this kind.

“This technique opens a whole new way of looking at how cells work,” Dr. Kuimova explains. “We usually monitor smaller changes in viscosity under normal physiological conditions, but it was exciting to apply our technique to conditions when the cells were pushed to the extreme.”

This study worked with general mouse cells and specialized human cells of the endothelium — those that line blood vessels. Both types of cells had very fast responses in stiffness to gravity levels. The team says this suggests it is mostly a physical response caused by components in the cells’ membranes, rather than an active shift in which the cell senses changes in pressure and starts to produce a mechanical change in its membrane as a result.

The human cells saw the greatest and fastest changes, the team reports, which isn’t that surprising; endothelial cells are equipped to deal with pressure changes caused by sharp corners in vessels, plaque build-up, or shifts in heart rate and blood pressure. This effect might illustrate what cells are subjected to with arterial diseases (though that happens on a larger scale), the team writes.

In the future, the team wants to look at how the cell signals to its membrane to increase viscosity. They also want to adapt their method to study the viscosity of different parts of the cell, how this is implicated in diseases and how cell membranes control other things.

The paper “Measuring Intracellular Viscosity in Conditions of Hypergravity” has been published in the Biophysical Journal.