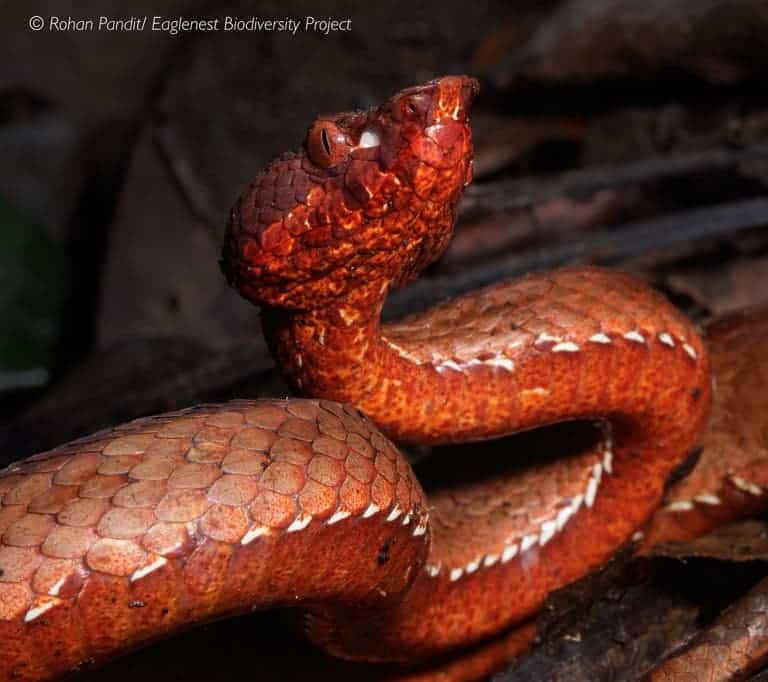 The Arunachal pit viper was found in the state of Arunachal Pradesh in northeast India, close to the border with Bhutan and China. Image by Rohan Pandit.

Meet the Arunachal pit viper — or by its formal name, Trimeresurus arunachalensis. The viper was discovered by accident, when researcher Rohan Pandit and Wangchu Phiang, a member of the indigenous Bugun tribe, were carrying a biodiversity survey in north-eastern India. They found the snake by accident, although it was excellently camouflaged in the fallen foliage.

They weren’t sure what species it was, but they carefully studied it, noting its number and pattern of scales, and describing its anatomy. They also harvested DNA samples for analysis.

They sent the samples to Deepak Veerappan, currently a herpetologist at the Natural History Museum, London, who was then working at the Indian Institute of Science. To Veerappan, it was clearly a new species.

“I have been studying [the] morphology of snakes and lizards for a while now. The first time I saw the hemipenis of the snake [I realized] it is unique compared to its congeners,” he said. Veerappan also commented on its unusual coloring: perfect for hiding in between fallen leaves, despite a brightly colored orange belly.

“If you look at it from the top, it appears drab and camouflages well against leaf litter,” Pandit said. “But on the sides and the belly they have a bright orangish color.” 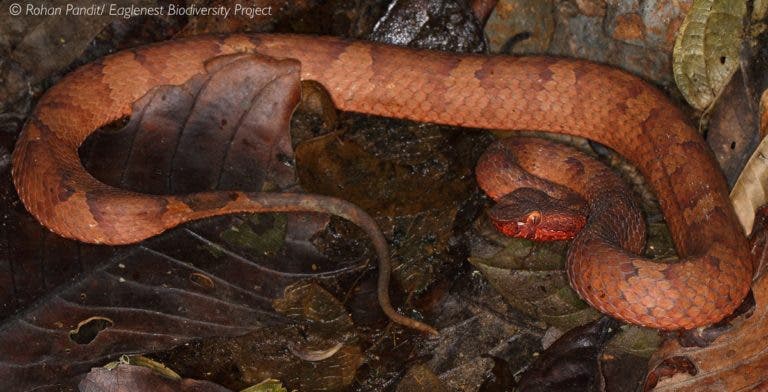 Despite the fact that only one specimen was found, the analysis strongly confirmed that it’s a new species. Genetic analysis indicates that it is closely related to the Tibetan pit viper (Trimeresurus tibetanus), a snake known only from Tibet, but features significant anatomical differences from this species.

However, although researchers are confident in the snake’s unique identity, they don’t know all that much about it. For instance, even though this snake was found on the ground, it’s not clear if it’s entirely terrestrial or also spends some time in the trees. We also don’t know what it eats or its general behavior. Most importantly, we don’t know whether this snake is threatened or not — it’s anyone’s guess how many Arunachal pit vipers there are in the wild.

Researchers are hoping to carry out a more detailed survey in the future. For now, however, this finding suggests that the forests in northeastern India may host numerous undiscovered species, of which we know even less than the Arunachal pit vipers.