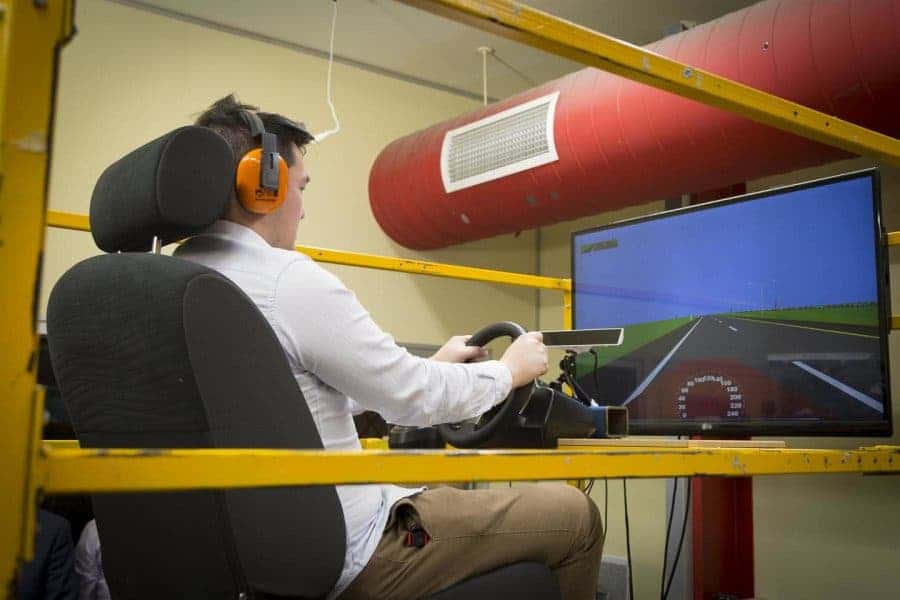 Many efforts and funding have been put into countering vibrations, such as the ones produced by an internal combustion engine, to dampen shocks and reduce noise. Much progress has been made; you only need to compare two vehicles, one twenty years old, the other brand new, and you’ll instantly notice the differences. One, noisy and bumpy, the other silent and smooth to cruise.

There is still room for much improvement. Engineers at the Fraunhofer Institute for Structural Durability and System Reliability LBF in Darmstadt are now researching the next generation of damping elements – active elastomers.

Elastomers are highly elastic materials, most common of which being rubber, which are well suited for absorbing shock and are widely used in the field. The researchers intend on brining shock absorbing a step further, or better yet a step back – making elastomers actively react to vibrations before they get the chance to produce shock.

The lattice-shaped electrode in the foreground, and the elastomer in the background.

Imagine a top tennis player slowing the ball down on a single drop by pulling back the racket. The active elastomer envisioned by the scientists would relatively employ the same principle, drawing out the energy from vibrations through a precise push-pull mode. In theory, vibrations would dissipate completely, in practice they’d be rendered to a minimum. Worst case scenario, active elastomers are a lot more efficient than any other conventional elastomer currently used today.

The concept isn’t new, however. Materials that are similar in principle have already been developed. “They are called ‘electroactive elastomers’,” explains LBF scientist William Kaal. “They are elastic substances that change their form when exposed to an electrical field.

An applied alternative current makes the material vibrate, and if you have smart electronics applying current precisely when and where it is necessary on the material to make it vibrate in a push-pull manner, then unwanted vibrations would be easily dissipated in the most part.

To demonstrate their concept, the researchers developed a model  made out of 40 thin elastomer electrode layers, fitted with  microscopic-sized holes in the electrodes. “If an electric voltage deforms the elastomer, then the elastomer can disperse into these holes,” said Jan Hansmann. The result is an actuator that can rise or fall a few tenths of a centimeter upon command – several times a second

The device then had a small mechanical oscillator attached to it to impose vibrations. When the oscillator was turned on, the actuator soon followed its oscillations and perfectly resonated with its frequency. If the oscillator is tapped by hand, it quickly settles down when the actuator vibrates in push-pull mode.

“An engine’s vibrations can be really disruptive,” says William Kaal. “The vibrations are channeled through the chassis into the car’s interior, where the passengers start to feel them. Active elastomers may help further reduce vibrations in the car,” Kaal asserts.

When the stack actuator is reversed, from producing vibrations, to absorbing them from the environment, it produces energy. The scientists introduced an electromagnetic oscillator on their stack actuator, it converted the vibrations into power. On the same subject, read: Nanotech powered by your breath.

“That would be of interest, for example, if you wanted to monitor inaccessible sites where there are vibrations but no power connections,” Jan Hansmann believes – as he cites an example: the temperature and vibration sensors that monitor bridges for their condition. 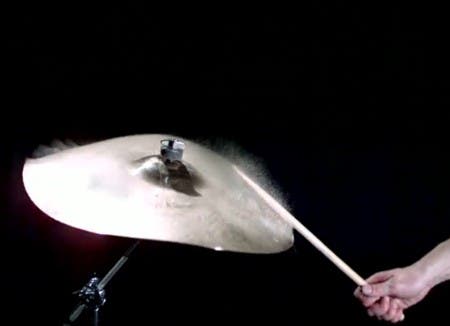 I’ve always liked drumming, and a masterful cymbal stroke is always a sign of good playing. I never once imagined, though, how complicated its motion of vibrations actually is, like demonstrated in the 1000 framer per second shot video from below. It actually wobbles when struck, similar to how waves might seems to juggle. Totally fascinating.

The video was shot by Fluke as part of its recent marketing campaign for company’s measurement instruments. Here’s another one from the same campaign right below, which shows in the same slow-mow technique a wet puppy shacking it off.