Vertical gardens set up on the exterior of buildings can reduce some of the stress levels caused by living in big cities, according to a new study. Researchers used virtual reality in over 100 people and found the vertical greenery has a stress-buffering effect.

Rapid urbanization has been associated with decreased nature exposure and increased environmental stressors like traffic noise and pollution. Considering that nature can combat stress and promote wellbeing, there have been tremendous interests and collective efforts across the globe to increase green space, with examples ranging from Europe to China.

Vertical greenery refers to the integration of vegetation onto the vertical structures of buildings, which differs from green roofs that utilize the flat horizontal space atop buildings. In the past, vertical greenery mainly consisted of self-climbing plants like vines that spread over buildings’ facades. But now the concept has been expanded much further.

Gardens take to the skies

Implementing vertical gardens can increase greenspace above-ground, thereby overcoming land constraints common in high-density urban areas, and provide important ecosystem services – such as cooling system, sound absorption which decreases noise pollution, and absorption of harmful pollutants which mitigates air pollution. But the advantages of vertical gardens may be even greater, especially on our mental health.

Existing research on nature’s effects on emotion and stress has been dominated by natural environments such as parks and forests. No experimental study has been done to examine the physiological benefits of having a row of buildings covered in vertical greenery. Now, researchers at Nanyang Technological University, Singapore hoped to address this gap with a new study.

They asked 111 participants to walk down a virtual street for five minutes, using VR headsets. Participants were randomly assigned to a street that had rows of planted greenery on balconies, walls and pillars or buildings, or on one with only buildings that had green painted walls instead of green plants. Traffic noise was played out during the experiment.

Those who viewed buildings with only a green pain had a significant increase in stress, as recorded by one measure of heart rate variability. Meanwhile, those who saw the buildings with the green plants didn’t experience any change in stress. This is in line with previous studies that have found nature to have beneficial effects on stress and emotion.

“With urbanization, more people are expected to be living in urban areas globally in future. It is thus important for urban city planners and architects to understand factors that can contribute to healthy living, as urban planning can have a direct impact on quality of life for the population. Our work can guide efforts to green cities, by providing evidence of how vertical greenery can be a viable way to integrate nature into our built environment and promote mental health,” Lin Qui, co-author, said in a statement.

The study was published in the journal Landscape and Urban Planning.

Sydney can boast the tallest vertical garden in the world. Completed in 2014, the city’s One Central Park is a towering residential building dressed in dazzling green plant garb. 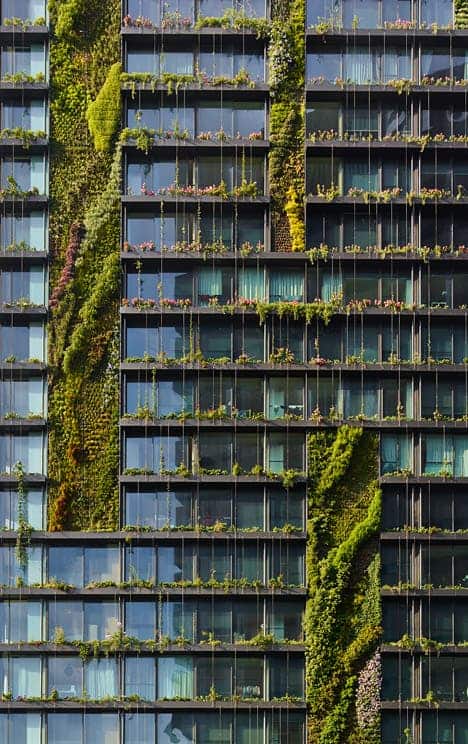 They’re stuffy, they’re gray, they’re dusty — they are cities. To satisfy our ever-growing need for space, engineers have paved and built over green areas, leaving only a tiny sliver behind as parks. But cities and greenery can coexist marvelously, Parisian architect Jean Nouvel and French artist and botanist Patrick Blank believe. The duo’s vision was proven right in 2014 as Sydney’s 166 meter (544 feet) high One Central Park. 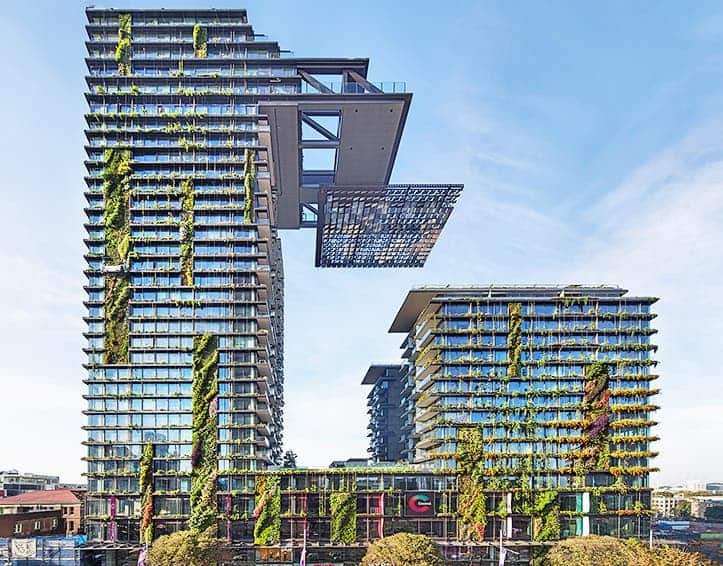 The residential high-rise is part of an “urban village” in downtown Sydney that houses residential towers, shops, and common spaces for artists and architects to enjoy. Cloaked in living greenery, OCP’s facade houses 250 species of native Australian plants hopping from balcony to balcony from a park at the heart of the complex. An assembly of motorized mirrors sprawls at the top to capture and direct sunlight down for the plants to enjoy. And after sunset, the building burst in LED lights designed by lighting artist Yann Kersalé to be renewably-powered. 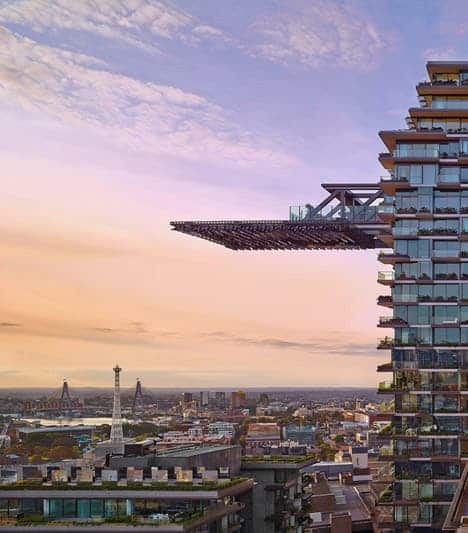 Its name is no coincidence either. The spacious 6,500 square meter (69,965 sq. feet) park at the base of the complex is reminiscent of New York’s famous Central Park. With large open lawns, chessboards, an open air cinema, and spaces for festivals or concerts, it is the architects’ hope that this park will provide a respite from city life just like its counterpart in the US. 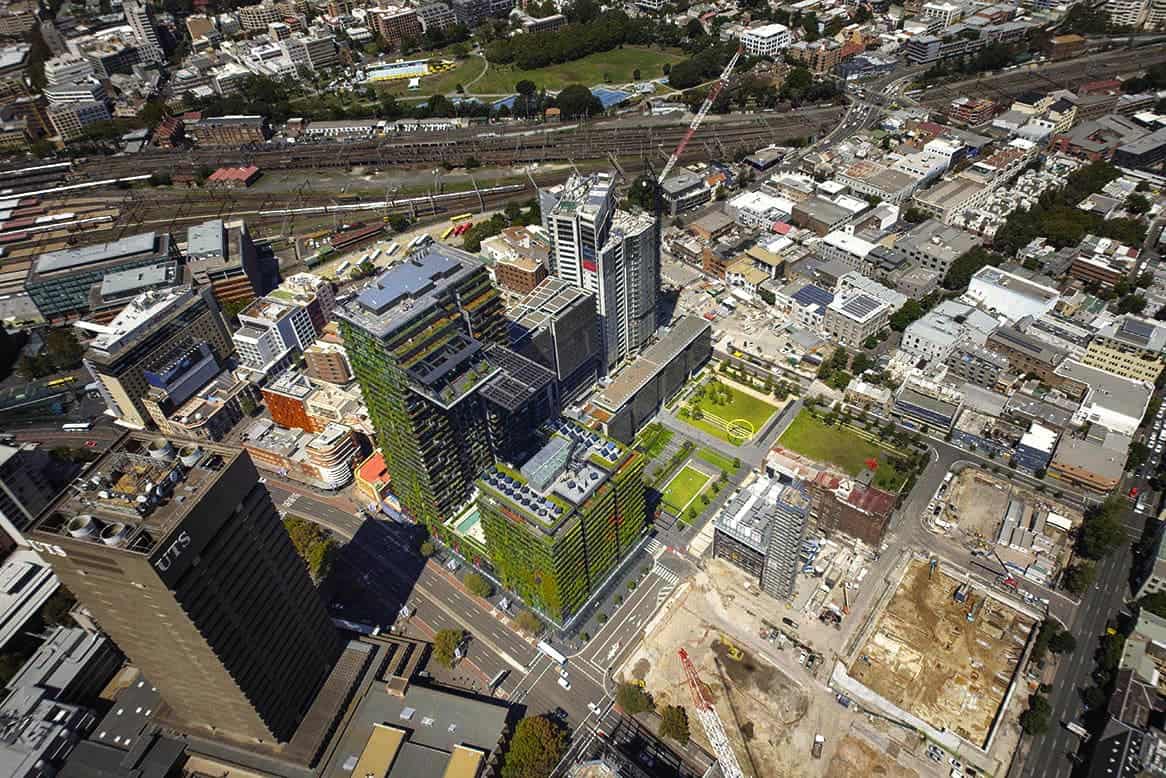 But it’s not all relax-this and enjoy-that. OCP and similar concepts serve as a blueprint for what many people hope urban architecture will become in the future. With concrete dominating skylines around the world, green-starved cities bake in their own tiny urban heat islands and smog. Combining built space with greenery could offer a healthy, environmentally-friendly alternative in the future.

“Hydroponic irrigation systems, for one, make it possible to grow a soil-less vertical veil of vegetation in planters and on walls all the way up to the tower tops. The resulting green facades trap carbon dioxide, emit oxygen and provide energy-saving shade,” said said Ateliers Jean Nouvel in a statement.

The concept has had huge success — all apartments list as “sold out” on One Central Park’s website.

Building vertical farms is innovative and can be really effective, when done properly; but building a vertical farm in the middle of a city… that’s just awesome! In downtown Jackson, Wyoming, developers are working on a vertical vegetable farm which just might revolutionize urban food growing.

At an altitude over a mile high, with snow that can last until May, the natural growing season often lasts only a month. Penny McBride, the project administrator for Vertical Harvest and one of the co-founders saw an opportunity – and she seized it.

“We’re replacing food that was being grown in Mexico or California and shipped in,” explains Penny. “We feel like the community’s really ready for a project like this. Everybody’s so much more aware of the need to reduce transportation, and people like to know their farmer and where food’s coming from.”

Indeed, by growing your food directly in the city you save money (and reduce pollution) on transportation; you also save a lot of time and effort too. Of course, the project was initially met with a lot of skepticism, but Penny and the rest of the team slowly convinced one skeptic after another – including Wyoming Gov. Matt Mead, who approved a $1.5 million state loan for the project on top of the $300,000 grant.

“The people involved in it had such a high level of commitment,” said Mead during a recent tour in Jackson covered by the Jackson Hole News&Guide. “They convinced me.”

The three story-high greenhouse will be growing vegetables year-round in the 13,500-square-foot hydroponic greenhouse. The products will go to restaurants, local groceries and directly to consumers. Growing and consuming food locally can be highly significant in the sustainable development of the area, and that’s exactly what everybody is expecting here. The company will also employ workers with developmental disabilities who have few local options for a job.

“We have a certain number of hours of work and divide it up based on ability, desire, and skill,” explains Nona Yehia, the architect of the vertical farm and one of the company’s co-founders. “The job is developed based on how many hours someone wants to work and can work.”

In terms of efficiency, Vertical Harvest estimates that with one tenth of an acre, they will produce the equivalent of 5 acres of traditional agriculture. Recirculating water will dramatically increase efficiency and artificial lighting will be necessary in the winter – but this will also mean extra costs and energy requirements. The total consumption per year is estimated at 312,000 kWh. However, the greenhouse should be able to crank out over 37,000 pounds of greens, 4,400 pounds of herbs, and 44,000 pounds of tomatoes. 95% of the first harvest is already contracted for delivery to local restaurants, groceries and a hospital, and while this will only cover a fraction of the city’s needs, it will provide jobs, healthy food and an architectural breath of fresh air to Jackson.

“It’s a feel-good story, which is why so many people were partnering with us from the beginning,” says Yehia. The team plans to open the farm early next year and will harvest the first crops a few months later.

3-D printing has taken the world by storm, and even though we’ve already discovered a myriad of potential applications, we’re just beginning to scratch the surface on what the technology can actually do. From cranium replacements to fossils, from artificial ears to artificial skin and from bacteria to livable rooms, 3-D printing has done it all, and more. Now, Sony computer scientist Yuichiro Takeuchi has figured out a way to print entire gardens which can then be planted on rooftops, sidewalks, empty lots or even vertical buildings. The innovation lies in the fact that this technology will allow people to create gardens without labor-intensive landscaping and planting that he thinks discourages some would-be gardeners. It would also save a lot of money and increase planning efficiency. 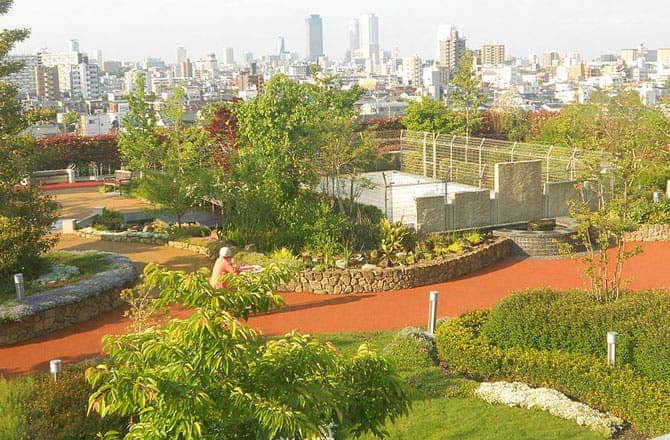 Takeuchi hopes to revolutionize gardening and create vertical and rooftop gardens, such as this conventional one atop a Tokyo hospital. Image credits: AMYOKO, VIA WIKIMEDIA COMMONS

“The printing solution takes away much of those hurdles, and also provides a high degree of flexibility (one can print out a garden that fits snugly into any designated space) which hopefully will make hydroponic gardening more attractive for citizen living in dense cities with limited space,” explained to the publication in an email.

He started working on this with a 3-D printer and software that he originally had designed for printing fabric encasements. He added an attachment that injects fast-growing plant seeds to the yarn and made other adjustments. Most notably, the seeds are nurtured hydroponically – with a mineral nutrient material instead of soil.

He starts out by designing the desired shape on a computer, feeding the design to the 3-D printer he designed and adapted. The printer then prints yarn in the shape of your choosing, as shown below.

After the printer is done with the yarn, it then dispenses tiny seeds into the yarn, like so:

The result can work both horizontally and vertically, potentially creating dazzling displays like this one in France designed by French botanist Patrick Blanc: 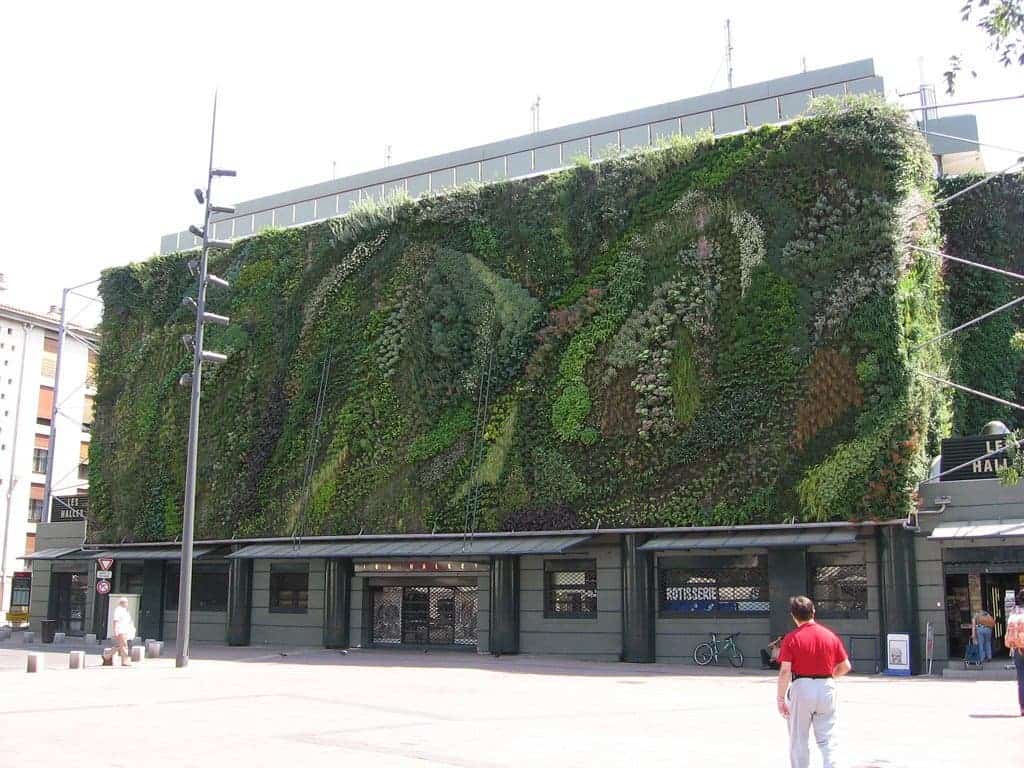 Right now, the technique only works with smaller plants like watercress and herbs such as arugula and basil, but he thinks that pretty soon he will also be able to work with larger plants and even fruit-bearing trees. His current 3D printer is too slow for that large a scale, so he is building a new, faster printer. There will certainly be hurdles along the way, but Takeuchi believes that 3-D printing can fix those problems:

“The printing solution takes away much of those hurdles, and also provides a high degree of flexibility (one can print out a garden that fits snugly into any designated space) which hopefully will make hydroponic gardening more attractive for citizen living in dense cities with limited space,” said Takeuchi.

What Takeuchi hopes to achieve, as presented at the Sony CSL symposium.

Ultimately, he hopes to fill cities like Tokyo with gardens, transforming the rooftops into green oasis. Plants have proven to increase productivity in the office and they also suck up carbon dioxide and help regulate urban temperatures. But there is also another, more poetic reason why Takeuchi wants to reinvent gardens:

“Here in Japan we love fireflies (they have a special cultural significance), but as they can only thrive in pristine environments we don’t see them in dense, built-up Tokyo,” he said. “I’m hoping that by installing a number of printed gardens on rooftops and walls throughout Tokyo, I can someday bring back fireflies to my neighborhood.”