Archaeologists have identified the oldest engraving known to mankind – a 500,000 shell scratched by a human ancestor. 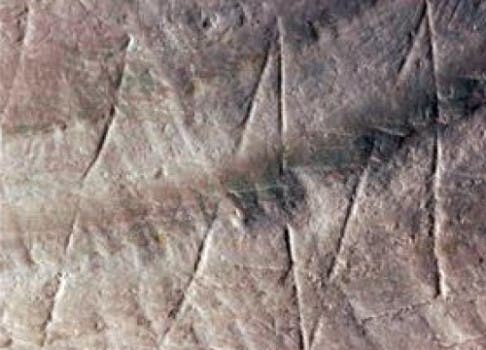 In 2007, Stephen Munro was a graduate student in archaeology; while he was studying some shells from Java, Indonesia, he had the shock of his life: he found that one shell had a pattern of zig-zag lines inscribed into it. Using microscopy, Francesco d’Errico, an archaeologist at the University of Bordeaux showed that the marks had been etched in one session, by one person using a sharp tool.

“I almost fell off my chair,” Munro says. That’s because the oldest known engravings date back 100,000 years and were made by modern humans—the only species thought to be capable of making abstract designs.

But 500,000 years ago (the age of the shell), there were no modern humans around. However, Homo Erectus was around. Homo Erectus is an extinct species of hominid that lived throughout from about 1.9 million years ago to 143,000 years ago. The species originated in Africa, but spread as far as Georgia, India, Sri Lanka, China and (of course) Java. That’s right, Homo erectus on Java was already using shells of freshwater mussels as tools half a million years ago, and as a ‘canvas’ for an engraving.

“Until this discovery, it was assumed that comparable engravings were only made by modern humans (Homo sapiens) in Africa, starting about 100,000 years ago,” says lead author José Joordens, researcher at the Faculty of Archaeology at Leiden University. 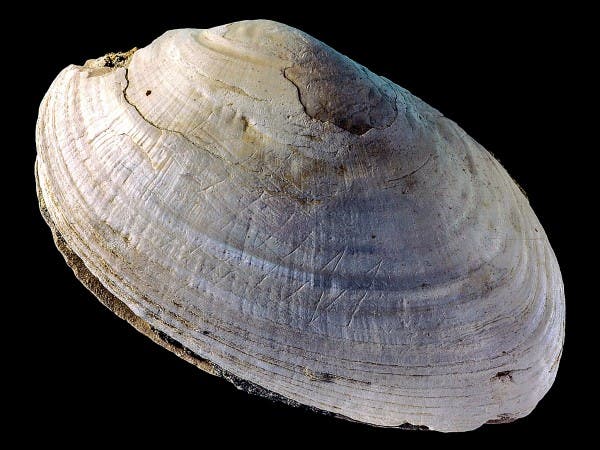 This is significant because many psychologists believe that geometric engravings are a sure sign of modern cognitive abilities, and only modern humans (Homo Sapiens) were thought to have cognitive abilities. This also means that Homo Erectus didn’t only made tools from stone, as was previously believed, but also used shells for this. They know shells were used as tools because one of them has a smooth and polished edge, which indicates that it was used as a tool for cutting or scraping.

Homo Erectus was pretty creative with the shells – first of all, they opened them by drilling a hole through the shell using a hard, pointed object (possibly a shark’s tooth) at exactly the spot where the muscle that keeps the shell closed is attached. Archaeologists have found many shells like this. If you damage or destroy these mussels, they open right up. If these findings are confirmed, then this means that after opening and eating them, Homo Erectus also used the shells as tools and as canvas for doodling.

“The precision with which these early humans worked indicates great dexterity and detailed knowledge of mollusc anatomy,” says Frank Wesselingh, a researcher and expert on fossil shells at Naturalis.

A team of 21 researchers analyzed the shells and associated sediments. The engraved geometrical pattern on one of the shells came as a total surprise. You need light coming from a particular angle to see the drawing, which is clearly older than the weathering processes on the shell arising from fossilization. Researchers at the VU University Amsterdam dated the shells and found that their age is between 430,000 and  540,000 years old. Could it be a hoax? The answer is almost beyond the shadow of a doubt: No, it’s not a hoax. This type of dating is usually very accurate and furthermore, Robin Dennell, an archaeologist at the University of Exeter in the United Kingdom revealed that the interiors of the grooves were smooth and rounded, not “jagged and sharp-edged” as you’d expect with modern engravings. 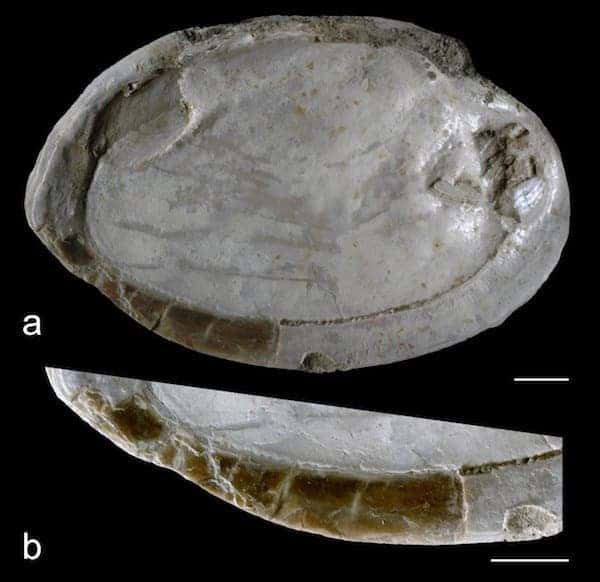 “I raised the scenario that one of Dubois’s workforce might have been bored and engraved a shell over lunch time”, he joked, before explaining how we know this is not the case.

What’s interesting to note is that the shells have been in a museum collection for quite some time now, and this spectacular discovery was just now made.

“It’s fantastic that this engraved shell has been discovered in a museum collection where it has been held for more than a hundred years. I can imagine people may be wondering whether this can be seen as a form of early art,” says Wil Roebroeks, Professor of Palaeolithic Archaeology at Leiden University. He was able to finance this long-term research with his NWO Spinoza Prize. “At the moment we have no clue about the meaning or purpose of this engraving.”

Can we really call this art? I don’t really know, but one thing’s for sure – we have to reevaluate our knowledge about the cognitive abilities of humanity’s ancestors.