Coronavirus cases and fatalities in Utah

A regularly-updated map of confirmed COVID-19 cases, county by county.

The number is based on confirmed diagnostic tests. It is very likely that the true number of COVID-19 cases is higher as many cases are asymptomatic.

New COVID-19 cases and fatalities per day in Utah

This is a good indicator of “flattening the curve” — when there is a steady decreasing trend, it is an indicator that the spread of the disease is slowing down.

If you’d like to use these graphs and maps on your site or articles, please e-mail us.

Cases, updates, and charts on the coronavirus crisis for each US state and territory. Just follow the links below.

Governor Gary R. Herbert extended the “Stay Safe, Stay Home” directive to all Utahns through May 1. This is not a shelter in place order, but rather the next step in the Urgent Phase laid out in the Utah Leads Together plan. This directive seeks to make clear what individuals and businesses should do to slow the spread of COVID-19 in our state and communities.

Work from home if possible.

Businesses should allow employees to telework immediately, if feasible. We encourage business leaders to make teleworking available to as many employees as possible and expand what they may already be doing in this regard.

This includes gatherings such as church and religious services, concerts, conferences, and other events or places where large numbers of people gather together. If you are immunocompromised or have underlying medical conditions which put you at an increased risk for severe symptoms of COVID-19, you should not attend any mass gatherings. Stay home if you are sick. We ask employers for leniency and tolerance for employees who are sick and need to stay home to help prevent the spread of this disease. 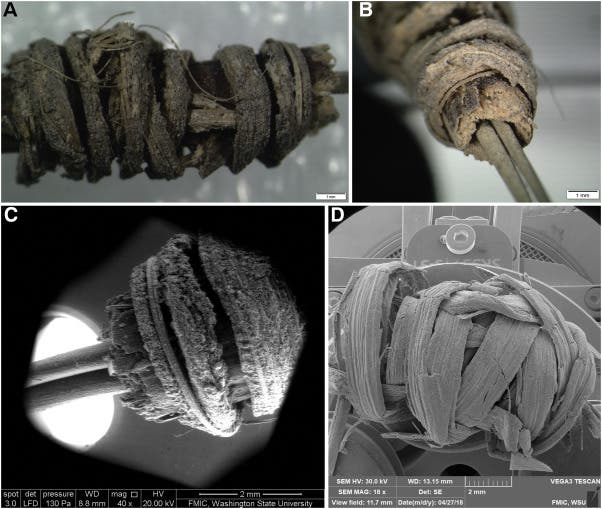 The Ancestral Pueblo people living in Utah around 2,000 years ago were big on tattoos, new research suggests. A team from the WSU led by Andrew Gillreath-Brown, an anthropology Ph.D. candidate, discovered a pen-sized instrument used to apply tattoos — the tool has been sitting in storage at the WSU Museum of Anthropology for 40 years.

Andrew found the item by chance while reviewing archaeological materials from the Turkey Pen site in southeastern Utah. This tool was made around 2,000 years ago by the Ancestral Pueblo people of the Basketmaker II period in what is now southeastern Utah, they report, pushing back the history of tattooing in western North America by more than a millennium.

“Tattooing by prehistoric people in the Southwest is not talked about much because there has not ever been any direct evidence to substantiate it,” says Gillreath-Brown.

“This tattoo tool provides us information about past Southwestern culture we did not know before.”

Tattooing is an art, a form of cultural expression, and practical skill with ancient roots that many people worldwide enjoy even today. However, we don’t know a lot about how, when, and where this practice began. Its history is especially-muddy in areas like the southwestern US, the team adds, where written accounts are lacking and no tattoos have been preserved on human remains.

In such cases, researchers rely almost fully on ancient artwork for depictions of tattoos and the implements used to create them. As far as archaeological evidence goes, we’ve found bundled and hafted (or handled) cactus spine tattoo tools in Arizona and New Mexico that were used to apply tattoos sometime between AD 1100-1280.

The tool Gillreath-Brown found was very similar in structure to these previously-uncovered tattooing tools. It consists of a 3.5 inch (roughly 9 cm) wooden handle — made from skunkbush wood — and two parallel cactus spines stained black at their tips.

“When I first pulled it out of the museum box and realized what it might have been I got really excited,” he said.

“The residue staining from tattoo pigments on the tip was what immediately piqued my interest as being possibly a tattoo tool.”

Scanning electron microscopy and X-ray fluorescence analysis showed that the crystalline structure of the black pigment showed that the inks likely contained carbon — a common element in body and tattoo paints around the world. Gillreath-Brown also created a few test tattoos using a replica of the tool on pig skin using ink “made using wood charcoal, ground using a mortar and pestle and mixed with water to a slurry-like consistency.” The tool performed quite well, he reports, inserting pigment deep enough into the skin to create tattoos (about 2 mm deep, corresponding to the epidermis).

“[The discovery] has a great significance for understanding how people managed relationships and how status may have been marked on people in the past during a time when population densities were increasing in the Southwest,” Gillreath-Brown reports.

The paper “Redefining the age of tattooing in western North America: A 2000-year-old artifact from Utah” has been published in the Journal of Archaeological Science: Reports.

Utah really deserves its nickname of the Beehive state, scientists from the Utah State University (USU) report. According to a new paper they published, the state is home to one-quarter of all bee species in the nation. Roughly half of these species live and buzz in the original boundaries of the (now reduced) Grand Staircase-Escalante National Monument.

Using opportunistic collecting and a series of standardized plots, the team collected bees throughout the six-month flowering season (for four consecutive years). Led by USU alum and researcher Olivia Messinger Carril, they identified a stunning 660 different bee species in the area. That’s “almost as many species as are known in the entire eastern United States,” she explains.

Out of the lot, 49 species were previously unknown. The team also found 150 morphospecies — species which, although greatly similar to other existent species, are so different in form and structure that they’re treated as a distinct twig on the tree of life.

The Grand Staircase-Escalante National Monument is nestled in the plateaus of south-central Utah, 250 miles south of Salt Lake City and 200 miles northeast of Las Vegas. Despite being quite arid — if you’ve never visited, the site is a sprawling network of arid ridges, plateaus, and canyons — the site houses over 87% of the state’s flowering plant species.

Given its buffet-like offering of pollen, the Grand Staircase-Escalante National Monument plays host to a huge diversity of bees and other pollinators. Wilson explains that the researchers found all walks of bees during their study — from generalists to narrow specialists, including ground-nesters, cavity and twig-nesters, cleptoparasites, solitary and social species.

Bee diversity at the site seems to peak each spring (which is pretty usual bee-havior), but also during late summer, following monsoonal rains. All in all, “it’s an amazing natural laboratory of pollinators, of which we don’t know a lot,” Wilson says.

Still, the current administration doesn’t seem to agree. On December 4, 2017, President Donald Trump ordered that the monument’s area be reduced to 1,003,863 acres (4,062 sq km), a 47% decrease. Various groups have attacked the decision in court.

“The large reduction of this protected areas could have implications for future biodiversity,” Wilson says.

On a personal note, I think that finding such a rich — and from all indications, relatively stable — pollinator population is a very encouraging sign. Between habitat destruction and pesticide use, we’re putting a lot of pressure on such species. Should they crumble under the strain, our food production would plummet. If push comes to shove (let’s hope it doesn’t), such sites may give us the opportunity to ‘graft’ pollinators back to areas that lost them.

All we have to do is not mess with it in the meantime — let’s hope we can manage that.

The paper “Wild bees of Grand Staircase-Escalante National Monument: richness, abundance, and spatio-temporal beta-diversity” has been published in the journal PeerJ.

The mysterious Utah Zika case has been solved — it probably won’t happen again, but the findings will still make you uncomfortable.

In yet another worrying twist in the Zika epidemic, the Utah Department of Health reported on Monday that one case of infection in the state doesn’t fit anything we know about how the virus spreads. In July, a 73-year-old Salt Lake resident infected with Zika after a trip to Mexico died in Utah — one of his relatives, a 38-year-old man who helped care for him but did not travel to any Zika-infected areas or had intercourse with an infected person, also became infected.

Authorities were further baffled as the Aedes aegypti mosquito’s range, Zika’s primary carrier, doesn’t include Utah. A new paper published by the physicians from the University of Utah explains that this is the first documented case of the virus spreading through casual contact with an infected person.

Utah’s mystery Zika case has been solved, and the answer, as with so many revelations about Zika, is something never before seen with this virus. Someone seems to have gotten Zika through only casual physical contact with an infected person — the first such case that’s been documented.

Patient 2 says he’s come into physical contact with Patient 1 when assisting a nurse in repositioning him without using gloves, and when wiping his eyes during. He reported having no other contact with Patient 1’s blood or bodily fluids, including accidental splashes or mucous membrane exposure.

So that leaves only sweat or tears as a possible medium for infection. Previous research has found traces of Zika in infected mice’s tears, but no work has so far been performed on sweat. The team writes that Patient 2 probably had a cut somewhere on his hands or he accidentally touched his eyes, nose, or mouth with infected material on his fingers, creating an opportunity for infection.

“It should not be able to pass through unbroken skin,” says Sankar Swaminathan, the chief of infections disease at University of Utah Health Care, and first author on the paper.

The team notes that the uniqueness of Patient 1’s case allowed for the infection to occur. Zika fatalities are very rare, with only 13 adult deaths so far in the outbreak (not counting Guillain-Barré fatalities.) So for an adult patient to die of Zika there has to be a preexisting condition which compromises the immune system such as leukemia, Swaminathan says. Patient 1 didn’t have such a condition, but his infection was unusually severe. He had 200 million viral entities per milliliter — typically, that number revolves around hundreds of thousands, with one million being considered high. We don’t know exactly why, though — Zika is a pretty mild virus in adults.

The team proposes that the patient’s previous infection with dengue and the remaining antibodies somehow worsened the infection. Some dengue patients show a far worse infection with the virus. Or, the man was simply unlucky, having a genetic immune deficiency which suited the virus. “there’s some people we find who get very unusual manifestations of infections that 99.99 percent of people never get,” Swaminathan says. It could be that these people, though not otherwise immunocompromised, have specific weaknesses to particular pathogens.

“There’s some people we find who get very unusual manifestations of infections that 99.99 percent of people never get,” Swaminathan said, talking about infectious disease.

The end result was that Patient 1 struggled with an immense viral load, which eventually lead to shock, respiratory failure, and death. Swaminathan suspects that this huge concentration of viral bodies in his body allowed the virus to spread through Patient 1’s tears or sweat. The extent to which this can happen for usual Zika infections needs further research, the authors suggest.

Mosquitoes and sexual transmission are still the main worries, however.

“For the general public, this doesn’t really change very much,” Swaminathan says. “There’s no risk of shaking hands with a person who has a typical Zika infection.”

The full paper “Fatal Zika Virus Infection with Secondary Nonsexual Transmission” has been published online in the New England Journal of Medicine.