A new study has revealed the fun-loving side of crocodiles; the reptiles, generally regarded as ferocious and aggressive, are reported to surf waves, play ball and engage in piggyback rides to have fun.

Vladimir Dinets of the University of Tennessee, Knoxville has spent a decade studying the behavior of crocodiles, evaluating their habits and noting playful interactions between the species, and even with humans. The study has been published in the journal Animal Behavior and Cognition and shows that even beasts sometimes like to have fun.

“Many aspects of crocodilian behavior remain poorly known due to their rare occurrence and to the difficulty of observing predominantly nocturnal predators. In the case of play, an additional problem appears to be that people witnessing such behavior consider their observations unworthy of publishing or unlikely to be taken seriously.”

Crocodile playful interactions are actually quite complex – including locomotor play, object play and social play. Crocs like to engage in playing with others or with objects more often than being social. Playful behavior has been observed previously, though it wasn’t interpreted accurately.

“In many cases this behavior appears to be accidental, but on two occasions I have seen crocodilians doing this in a manner strongly suggesting play. In both cases, the objects were pink Bougainvillea flowers that were floating in the pools where the animals were kept captive.”

In several instances, he actually observed crocodiles playing with humans. He details one such episode:

“The crocodile would swim with his human friend, try to startle him by suddenly pretending to attack him or by sneaking up on him from behind, and accept being caressed, hugged, rotated in the water and kissed on the snout.”

His research seems to suggest that crocodiles may be much more affectionate than previously thought, and can even harbor feelings towards humans.

“A man who rescued a crocodile that had been shot in the head became close friends with the animal. They happily played every day until the crocodile’s death 20 years later”.

Crocodiles evolved 55 million years ago and have been a top predator ever since. Our knowledge and understanding of them is still quite lackluster, because they dangerous and often find in remote areas. This paper shows a side of them we are just starting to discover – and there are likely others as well.

“Play behavior in crocodilians is not uncommon, but it remains virtually undescribed in scientific literature. I present the first overview of play behavior of three types (locomotor play, object play and social play) in crocodilians based on original observations, published reports and anecdotal evidence”, the paper’s abstract reads.

Do you fancy diamonds? If the answer is ‘yes’, then you’ll absolutely love this rock extracted from a Russian mine. The rock is littered with over 30,000 diamonds, something which is extremely rare and may yield valuable information about how diamonds form in natural conditions.

What’s unlucky for gem sellers was very fortunate for researchers – because the tiny diamonds are so small, they are pretty much worthless as gems, so they donated the rock for study. Hurray for science!

The rock was extracted from the huge Udachnaya pipe, an open-pit mine located in Russia, just outside the Arctic circle. It’s one of the biggest diamond mines in Europe and in the world. The results were reported by geologist Larry Taylor from the University of Tennessee this week at the American Geophysical Union’s annual meeting.

“The exciting thing for me is there are 30,000 itty-bitty, perfect octahedrons, and not one big diamond,” said Taylor at the meeting. “It’s like they formed instantaneously.” 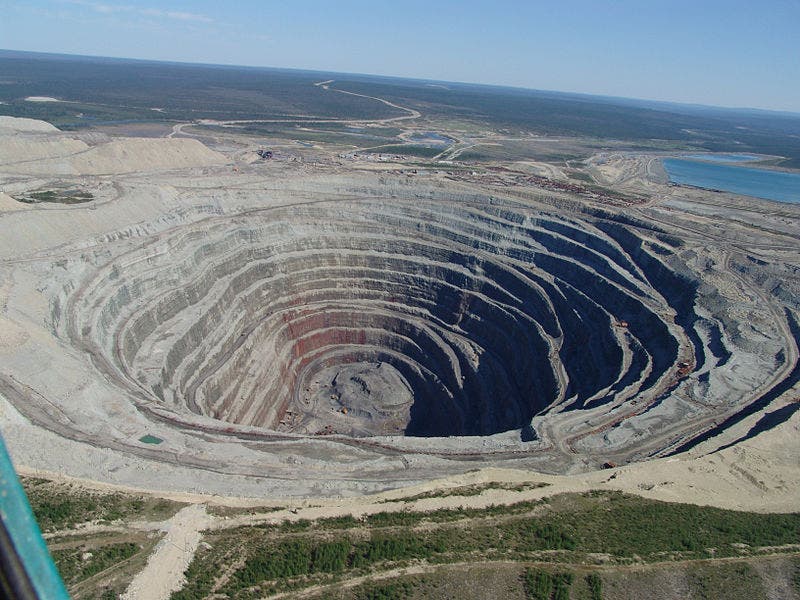 Even thought the diamonds are so small, the concentration of diamonds in the ore is humongous: million times more than usually. This remarkable association of diamonds and other minerals will hopefully reveal the exact chemical reactions which lead to the formation of diamonds on Earth – which are still a mystery. Taylor said:

“The associations of minerals will tell us something about the genesis of this rock, which is a strange one indeed. The [chemical] reactions in which diamonds occur still remain an enigma,” Taylor told Live Science.

Although highly regarded as the a gem and extracted for this purpose for centuries, we still don’t know exactly how diamonds form. According to our current understanding, diamonds are formed at high temperature and pressure at depths of 140 to 190 kilometers (87 to 118 mi) in the Earth’s mantle. Carbon-containing minerals provide the carbon source, and the growth occurs over extremely long periods from 1 billion to 3.3 billion years! Diamonds are then brought close to the Earth’s surface through deep volcanic eruptions by a magma, which cools into igneous rocks known as kimberlites and lamproites. The heat destroys most of the material surrounding the diamonds, but the diamonds still resist. There are also ways of creating artificial diamonds, but the exact chemistry still eludes us. 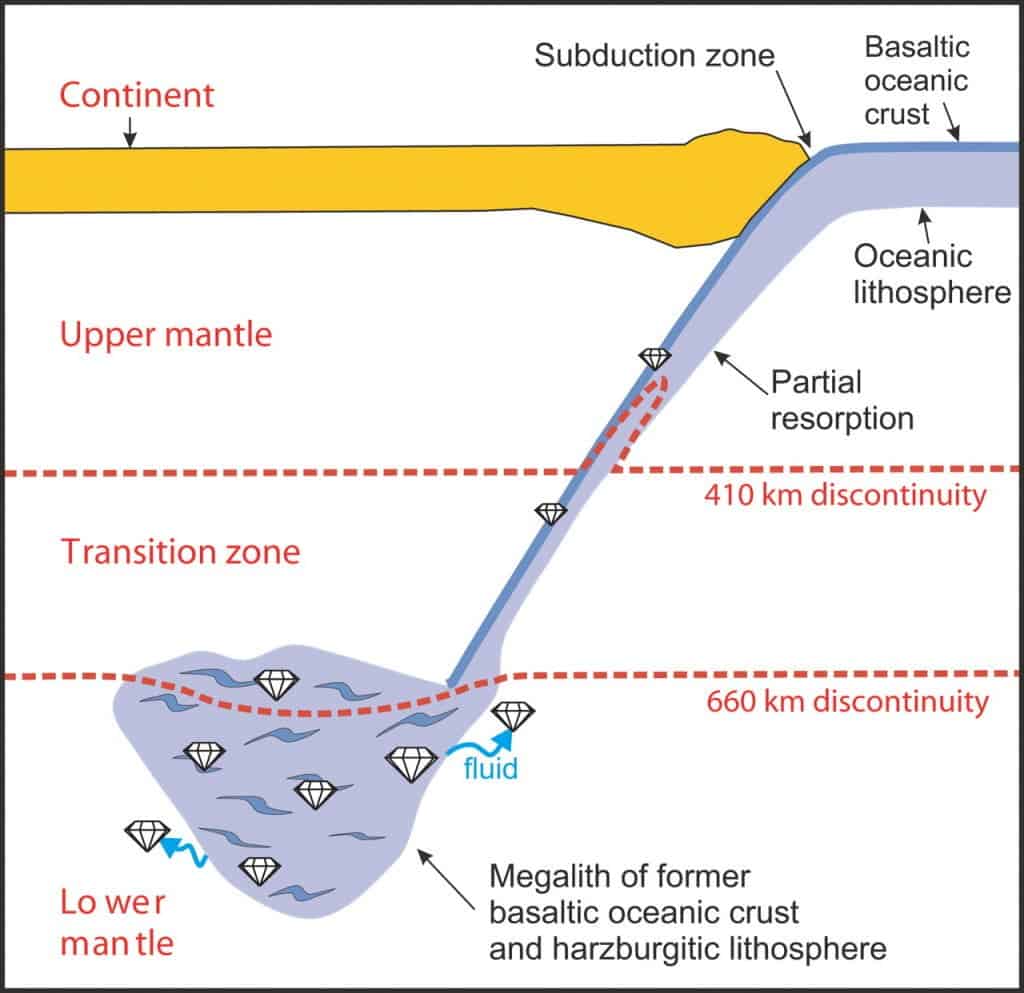 But while you do see several diamonds on the same rock, you almost never find a rock with so many. Working with researchers at the Russian Academy of Sciences, Taylor analysed the rock using an industrial X-ray tomography scanner to figure out how it ended up with such a staggering amount of diamonds and remained intact when it was raised to the surface.

“The clear crystals are just 0.04 inches (1 millimetre) tall and are octahedral, meaning they are shaped like two pyramids that are glued together at the base,” says Oskin. “The rest of the rock is speckled with larger crystals of red garnet, and green olivine and pyroxene. Minerals called sulphides round out the mix. A 3D model built from the X-rays revealed the diamonds formed after the garnet, olivine and pyroxene minerals.”

The minerals also had some exotic material included in their structure. These inclusions were once fluids that seeped out of the Earth’s oceanic crust when one tectonic plate crashed onto another. These fluids crystallized and became an integral part of the diamonds, much deeper in the earth and much, much later. This is either a very strange and unusual formation, or…

“[The source] could be just a really, really old formation that’s been down in the mantle for a long time,” Sami Mikhail from the Carnegie Institution for Science in the US, who was not involved in the research, told Live Science. 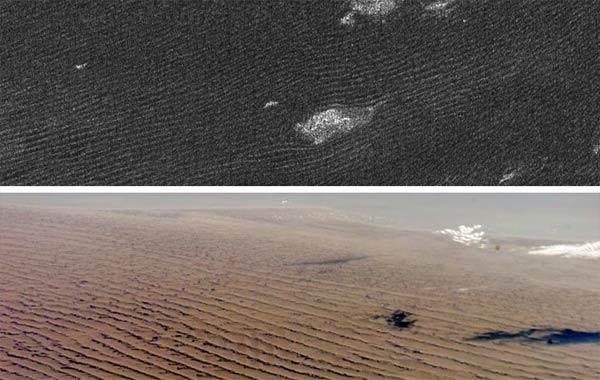