Scientists have discovered and described the only known species of Yeti Crab that resides in Antarctica’s Southern Ocean. The crab, which has white fur-like bristles all over its body, survives in an extremely inhospitable environment, close to the hydrothermal vents that spew hot water in the freezing ocean. 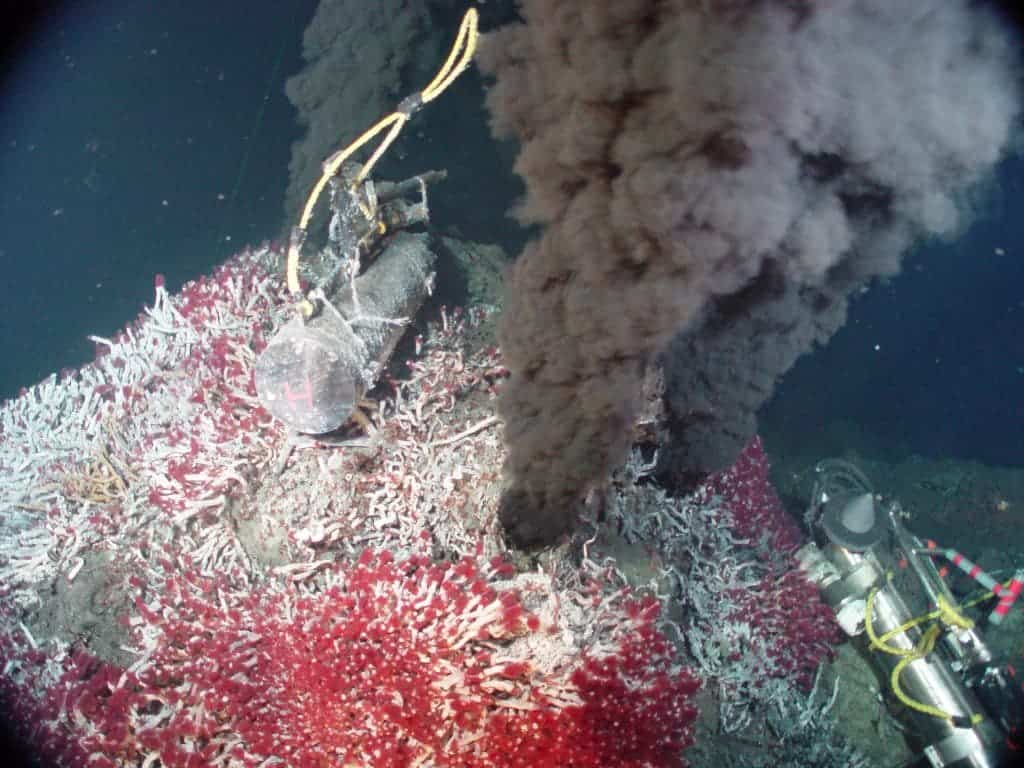 Sven Thatje from the University of Southampton first discovered the species in 2010, thanks to footage from a remotely-operated submersible vehicle (ROV). The ROV dove 8,500 feet (2,500 meters) below sea level and found that the yeti crab is the dominant species in the environment created by the hydrothermal vent. After that, they gathered specimens and studied them using genetic sequencing and computed tomography (CT) scanning. Their description of the creature’s strange morphology is published today (June 24) in the journal PLOS ONE. They named it Kiwa tyleri, after respected British polar and deep-ocean biologist Paul Tyler from Southampton University. 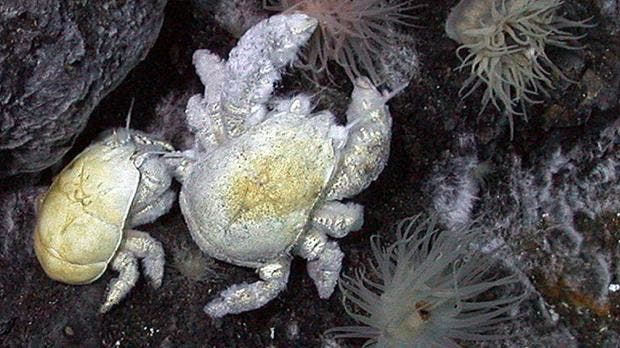 The Yeti Crab. Image via University of Southampton.

Thatje explains why this discovery is significant:

“Crabs and lobsters are very rare in Antarctic/Southern Ocean waters because of the unusually low seawater temperatures,” Thatje said. “A physiological limit to maintaining activities required for survival (ventilation, molting, mating) appears to exist at around 0.5 degrees C [32.9 degrees F].”

In other words, even though the crab is adapted to a cold environment and developed a stark white color and “hairy body”, it still can’t survive in very cold waters – that’s why they are so crowded together around the hydrothermal vent. A hydrothermal vent is a fissure in a planet’s surface from which geothermally heated water pumps up into the ocean, creating a hot pocket of water. In 2012, an expedition found hundreds of crabs clumped up one over another.

“They’re literally, in places, heaped up upon each other,” Alex Rogers, a professor of zoology at Oxford University who led the expedition to the East Scotia Ridge, said in 2012. Photographs taken by Rogers’ team show 600 crabs per square meter.

It seems like the entire species inhabits only a few cubic meters, which raises the question: if so many crabs are clumped up together, what do they eat? The answer was surprising: the yeti crab uses its “fur” to harvest bacteria, which it grows and then relies on for nutrition.

“The Antarctic Yeti Crab is trapped in its warm-water hydrothermal vent site by the cold polar waters of the surrounding deep-sea. The species has adapted to this very limited sized habitat — of a few cubique metres in volume — by occurring in highly-packed densities and by relying on bacteria they grow on their fur-like setae [stiff bristles] for nutrition,” Dr Thatje said in a press release.

They like freezing conditions, but the Emperor penguins struggled during the last Ice Age, a new study concluded. In fact, if they hadn’t been able to change their breeding habits and even their genetic make-up, they might have not survived.

The Emperor penguin is the tallest and heaviest penguin on Earth, and it’s endemic to Antarctica. Reaching 1,22 meters (4 feet), it’s truly worthy of its royal name. But it’s a tough life being a penguin, and it was even harder during the last Ice Age. Back then, 30,000 years ago, ice covered much more sea than it does today, which mean that penguins could only breed in a few special locations.

“The distances from the open ocean, where the penguins feed, to the stable sea ice, where they breed, was probably too far. The three populations that did manage to survive may have done so by breeding near to polynyas – areas of ocean that are kept free of sea ice by wind and currents,” said Gemma Clucas from University of Southampton, one of the researchers.

By examining the genetic diversity of both ancient and modern Emperor penguins, scientists from the universities of Tasmania, Southampton and Oxford in Britain, and the Australian Antarctic Division were able to get a pretty good picture of how their numbers varied in time. At one moment, it’s estimated that there were only three populations living in the Antarctic.

“We hadn’t really thought about the fact that it would be too cold for them in the past,” said Jane Younger, a PhD student at the University of Tasmania who was also involved in the study. “They live through life in minus 30 degrees Celsius (-22 Fahrenheit) now so they are pretty cold adapted.”

They would have likely gone extinct if the ice age hadn’t waned away. As the temperatures slowly started to rise 12,000 years ago, penguin chicks had a better chance of surviving the winter, and more potential breeding sites opened up. Paradoxally, it’s the extremely low temperatures which they are so well adapted to that might have killed them.

“We were actually really surprised by this. What we had thought was that the ice age, because there was so much more sea ice, which they need (to breed), and because they are so cold-adapted, that this would probably be a good thing for them,” Younger said.

In their study, one notable area is the Ross sea – a population survived at Ross sea because an area of ocean was always kept free of sea ice by wind and currents, allowing the penguins to feed and breed.

“The Ross Sea is probably really important,” said Younger of the area on the Pacific Ocean side of Antarctica, which is considered the world’s most intact marine ecosystem. They have survived there for at least the last 30,000 years and even when the environment has been really unsuitable in a lot of other places, the Ross Sea has been kind of a safe haven for them. The Ross Sea seems to come up time and time again as a really important part of the Antarctic ecosystem.”

It’s one of England’s better kept secrets – Old Sarum is a hidden gem among gems, one of the most spectacular ancient sites in Europe and in the world. Old Sarum is the site of the earliest settlement of Salisbury in England. The site contains evidence of human habitation as early as 3000 BC, but only now have archaeologists uncovered the network of buildings in the city, including a very large and imposing castle. 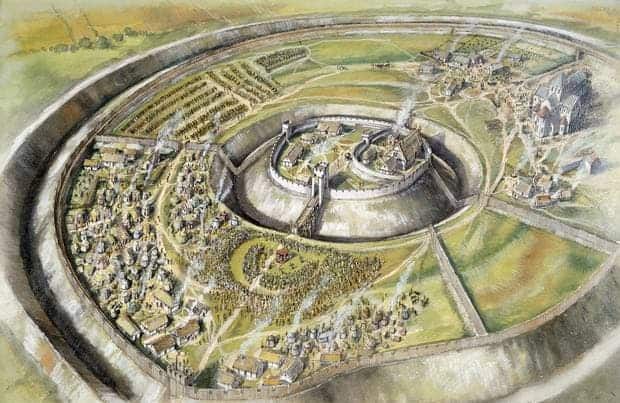 Artist’s impression of barons swearing allegiance to William the Conqueror in 1086. Image via English Heritage.

Using top notch geophysical techniques, a research team of students and academics from the University of Southampton carried out a survey on the site, scanning the underground and detecting buried structures. They located numerous structures on the inside and outside of the fortification, but what they found in the center is absolutely stunning: a 170m long, 65m wide palace complex, which has walls 3m thick and is arranged around a large courtyard, surrounded by many significant houses. Basically, this finding shows archaeologists and historians where major political and religious centre was in Norman Britain. The investigations revealed a settlement including structures from the late 11th century, contemporary with the construction of a cathedral and castle. The city was inhabited for over 300 years, but then abandoned, as the people moved to New Sarum (today’s Salisbury).

Professor David Bates of the University of East Anglia, a leading authority on Norman England said that this discovery is of enormous importance:

“It reveals the monumental scale of building work taking place in the earlier 12th century,” he said.

Indeed, because the city was inhabited for only three hundred years and then abandoned, the site is pristine; there is no “contamination” – later structures built on top of the older ones. Also, the city was a major one, so it has all the buildings and structures you would hope to find in a city from that period. Among the findings, archaeologists report:

Basically, they put up an entire plan of the city. Kristian Strutt of the University of Southampton, the archaeologist leading the geophysical survey, added:

“Archaeologists and historians have known for centuries that there was a medieval city at Old Sarum, but until now there has been no proper plan of the site. Our survey shows where individual buildings are located – and from this we can piece together a detailed picture of the urban plan within the city walls.”

The research was conducted as part of the Old Sarum and Stratford-Sub-Castle Archaeological Survey Project, directed by Kristian Strutt and fellow Southampton archaeologists Timothy Sly and Dominic Barker. In order to conduct the geophysical underground mapping, they conducted magnetic, electrical and ground penetrating radar (GPR) measurements. These are all non-invasive techniques, and allow archaeologists to know what they’re dealing with without actually seeing it. 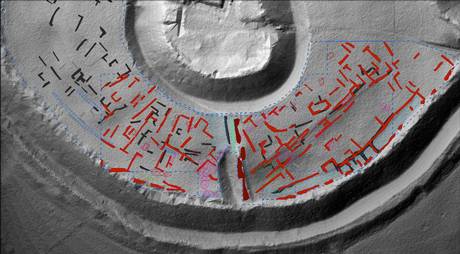 Archaeologists were able to create an underground map of Old Sarum without having to dig, through geophysical surveying. Image via Southampton University.

“Having the team of archaeologists on site over the summer gave our visitors a chance to find out more about how important historic landscapes are surveyed. The use of modern, non-invasive surveying is a great start to further research at Old Sarum. From this work we can surmise much about the site’s past and, whilst we can’t conclusively date the findings, it adds a new layer to Old Sarum’s story. We welcome the chance to find out more about our sites, and look forward to exploring ideas for further research in the future.”

Old Sarum was originally an Iron Age fort established around 400 BC and occupied by the Romans after the conquest of Britain in AD 43. The city continued to grow and thrive, and in 1092, a cathedral was already constructed. Archaeologists hope to return again in 2015 and conduct even more detailed measurements. In the meantime, they will have to evaluate and analyze their current results, which paint an extremely detailed picture of ancient British society.