Nothing can travel faster than light in vacuum, per Einstein, but in the real world light travels at variable speed as it passes through a medium, be it air, water or glass. Physicists at  University of Glasgow now demonstrate that its not only the medium that can slow down light, but also shape after they performed an experiment where light traveled through a ”mask”. The findings could prove important in astronomy where even the slightest change in the velocity of light can change everything.

How shape collective pulls down photos to slowdown light

The team built what they call a racetrack, where photons (the packets that make up light) are sent and detected on a dual path. On the first path, light was fired in a normal way unaltered by nothing but the medium (air). On the second path, however, the light was fired  through a filter to shape it into either a Gaussian or Bessel beam. The photons from both groups were launched at the same time but the unshaped photons beat the shape-altered photons to the finish line by approximately 0.001 percent.

Of course, the filter itself slowed down the light because it passed through a medium, but this was only one half of reason the light was slowed down. After passing through a medium, light is said to revert back to its constant speed yet the speed of the photons was slower than normal after leaving the filter. The mask, the researchers explain, caused some of the photons in the group to move at a slight angle to the other’s causing a slowdown for the group as a whole.

The study published in Science highlights that, even in free space, the invariance of the speed of light only applies to plane waves. Astronomers might have to keep this in mind when studying objects thousands or even millions of light-years away to make sure their observations aren’t affected by the shape of light.

Scientists have made a significant step towards developing fully artificial life – for the first time, they demonstrated evolution in a simple chemistry set without DNA.

In a way, the researchers showed that the principle of natural selection doesn’t only apply to the biological world. Using a simple a robotic ‘aid’, a team from the University of Glasgow managed to create an evolving chemical system. They used an open source robot based upon a cheap 3D printer to create and monitor droplets of oil. The droplets of oil were placed in water-filled Petri dishes, and each dropled had a slightly different mixture of 4 different chemical compounds. 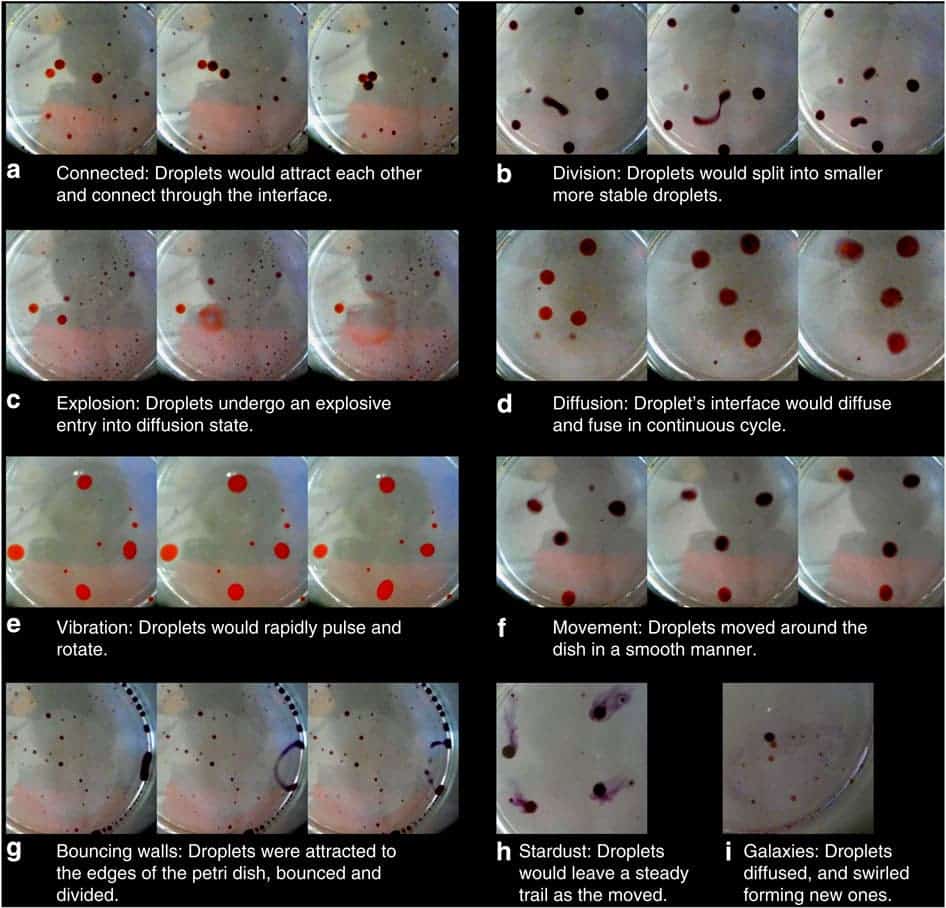 Photographs of the droplet behaviour as a function of time (from left to right) for all the traits (given in a–i). Image credits: Cronin et al, 2014.

The robot used a simple video camera to monitor, process and analyse the behaviour of 225 differently-composed droplets, identifying a number of distinct characteristics such as vibration or clustering. The team focused on division, movement and vibration as parameters to study evolution. They used the robot to deposit populations of droplets of the same composition, then ranked these populations in order of how closely they fit the criteria of behaviour identified by the researchers. They then created a new generation of droplets, with the best matching (“fittest”) composition carrying on to the second generation. After repeating this process for 20 generations, they found that droplets became more stable, mimicking the natural selection of evolution.

In other words, the robot acted as like a selection mechanism – much like environmental factors act in nature for organisms, and the chemical droplets acted like organisms, “improving” with each generation. Professor Lee Cronin, the University of Glasgow’s Regius Chair of Chemistry, who led the study said:

“This is the first time that an evolvable chemical system has existed outside of biology. Biological evolution has given rise to enormously complex and sophisticated forms of life, and our robot-driven form of evolution could have the potential to do something similar for chemical systems. 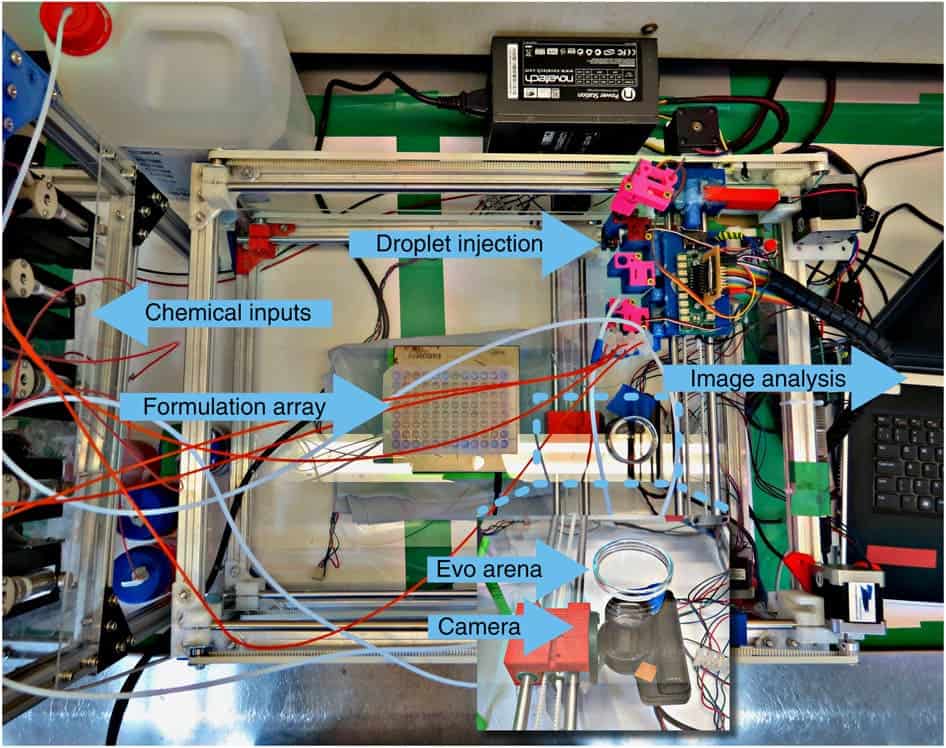 Photograph showing the pumps: cleaning and oil phases, the mixing array, the syringe array held in the X–Y stage, the evolutionary arena, the optical imaging system held below the evolution arena, the motors controlling the X–Y carriage and the computer interface. Image credits: Cronin et al, 2014.

“This initial phase of research has shown that the system we’ve designed is capable of facilitating an evolutionary process, so we could in the future create models to perform specific tasks, such as splitting, then seeking out other droplets and fusing with them. We’re also keen to explore in future experiments how the emergence of unexpected features, functions and behaviours might be selected for.

“In recent years, we’ve learned a great deal about the process of biological evolution through computer simulations. However, this research provides the possibility of new ways of looking at the origins of life as well as creating new simple chemical life forms.”