Have you ever wondered how our universe came to be? How does a universe come into existence?

You’d probably struggle to find a satisfying answer for that. Physicists all around the world had been bothered by this question for a long time, and the answer is still debatable. However, in their pursuit of fi, ding an answer they realized that space, time, energy and matter all came into existence at the birth of universe itself. So talking of a phase before that seemed as immaterial as “north of north pole”. Hence what initiated the universe or even what lies outside it is generally considered to be outside the remit of physics and more the concern of philosophy or metaphyhsics.

Therefore, physicists largely turned their focus on studying the evolution of universe. After years of research and experimentation, they came up with a beautiful theory to explain it. This was called The Big Bang Theory. But before looking into it, we need to know about an observation that decimated decades old notion of a static universe.

Our Universe is expanding

Just like Newton, Einstein believed that our universe is finite and static, or simply in a steady state. However, when he used his general theory of relativity to study the universe as a whole, he realized that space-time must be warped or curved around itself and hence due to the resulting gravitational pull it must be shrinking.

We don’t really know the shape of the Universe, but astrophysicists believe it’s one of these three shapes.

But he never quite came to terms with this idea. So he introduced a “cosmological constant” to maintain a static universe in his theory. Not everyone was a fan of this idea. Some scientists argued that introduction of this constant was completely arbitrary and was not backed up by any fact or observation.

Then in 1929, Edwin Hubble announced a dramatic discovery which completely stunned everyone.

While studying the light coming from other galaxies, he noticed that this light was shifted a little towards the red end of the spectrum due to Doppler Effect (also known as redshift) which indicated that galaxies were moving away from us. This observation was unchanged in every possible direction. In other words, the universe was expanding in all visible directions.

Now, if the galaxies were flying apart, then obviously at some time earlier, the universe would have been smaller than at present. So, tracing back the events just like a movie being played in reverse, we found that it was very tiny indeed.
Given the enormous scale of expansion of the universe, it was obvious that an equivalently enormous amount of energy must have liberated in the form of radiation. So it must be around today, and we might spot it. This speculation was accidentally confirmed by two young employees of Bell Telephone Laboratories in New Jersey. They picked up a mysterious microwave noise on their antenna which seemed to be coming equally from every direction in the sky. So eventually they realized that this microwave radiation must indeed be the “afterglow” of Big Bang.

It is quite surprising to know that our seemingly endless universe was once smaller than the size of a proton. All the matter and energy was squeezes into an infinitesimally small volume. In fact, even the four fundamental forces of nature were coalesced together in this gravitational singularity. It is truly unfathomable to consider this much concentrated energy and matter, but all the evidence seems to support it.

Then at some point around 13.7 billion years ago, this singularity suddenly expanded to about 1026 times it’s original size in just 0.0001 seconds. This was what we call the Big Bang. The Big Bang theory is essentially a timeline of everything that happened thereon after.

Apart from the observations stated above the Big Bang model is also supported by two theories: General theory of relativity and the cosmological principle (the assumption that matter in the universe is uniformly distributed on large scales, i.e. the universe is homogeneous and isotropic).

Dark Energy and Gravity — the Yin and Yang of the Universe. Image credit: NASA/JPL-Caltech.

Although the rate of expansion of the universe has decreased ever since the cosmic inflation, presently the universe is expanding at an accelerated rate. This is a bit surprising considering the large amount of mass present in the universe which should have slowed down the expansion due to the gravitational pull. So the concept of antimatter was introduced in an attempt to explain that there is more to the universe than what we see. The anti matter acts opposite to the matter we know and hence it repels instead of attracting. The amount of anti matter being much greater than the total amount of matter the expansion of universe has accelerated.

As of today we don’t seem to have the answer to “What the fate of universe will be”. But scientists generally agree that this fate will mainly depend on the universe’s overall geometry and the behavior of dark matter and dark energy on expansion of universe.

The universe could just stop expanding altogether reaching a state of maximum entropy and hence would become too cold to sustain life. Or it could continue expanding and lead to an event known as The Big Rip. Further advancements in fundamental physics are required before it will be possible to know the universe’s ultimate fate with a satisfying level of certainty.

This year’s Nobel Prize winning finding that the ‘Universe is accelerating’ is being subjected to another validation test in the USA to confirm whether the expansion is “even or uneven”. 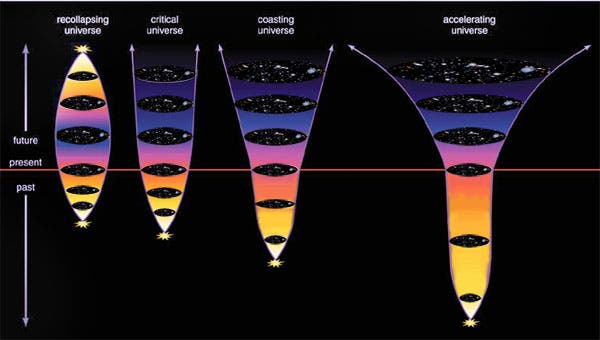 “We are testing the acceleration theory through another experiment to find whether the expansion is even or multi-directional. We are confident it would be ‘even’,” says eminent cosmologist Prof.Robert Kirshner who guided two of the three-member team of researchers that bagged the Nobel Prize in Physics – 2011 for the revolutionary finding recently.

With the experimental study now on, this time using the MMT telescope in Arizona and the Magellan Telescope in Northern Chile, he said, the researchers would, within two years, be in a position to collect enough data to determine whether the expansion of the Universe is even or in all directions, Kirshner said.

Kirshner of the Centre for Astrophysics, Harvard University (USA) was interacting with this Indian Science Writers Association(ISWA) representative in South Goa on the sidelines of the just concluded week-long VII International Conference on “Gravitation and Cosmology” organised by the International Centre for  Theoretical Sciences(ICTS) under the prestigious Tata Institute of Fundamental Research, Mumbai.

As many as 300 astrophysicists from across the world had participated in the conference and shared their findings and experiences on black holes,gravitation wave experiments and need for international collaborations to promote research in astrophysics of the 21st century.

His researchers – Adam Riess and Brian Schmidt – along with Perl mutter, had recently received the Nobel Prize in Physics for their stellar discovery in 1998, used the Panstars Telescope with big array of detectors with a gigapixel resolution to capture the image of many galaxies at the same time for the study.

“I am also confident that such high resolution and higher sensitive telescopes enable us trace the history of their shifts by recognizing what is known as their “Red Shifts” as the galaxies move away from us,” he said.

The on-going studies may also throw light on the ‘fossils of light” emitted when stars exploded during what is known as the “Big Bang” 14 billion years ago that led to the creation of the Universe.

“We expect data we gather could unlock the secrets of the origin of the Universe including the history of the first galaxies, stars and the supernovae and their death,” he said.

Scientists believe that the Universe contain galaxies, each composed of about 100 billion stars observable enough and 100 billion unobservable galaxies.

Earlier in his plenary talk in the conference on “Exploding Stars and the Accelerating Universe,” Kirshner said observations of exploding stars halfway across the universe show that the expansion of the universe is speeding up.

“We attribute this to a pervasive ‘dark energy’ whose properties we would like to understand. This work was recently honoured by the 2011 Nobel Prize in Physics to Perl Mutter, Schmidt and Riess.”

He had also presented the most recent evidence from supernovae, Cosmic Microwave Background (CMB) fluctuations, and galaxy clustering. The present state of knowledge on dark energy is completely consistent with a modern version of the cosmological constant, but with a ridiculously low value.

He also discussed ways to use infrared observations to make the supernova measurements with better accuracy and higher precision.

Kirshner also explained how improved supernova measurements and the matrix of evidence from other observations can help us understand whether modifications to general relativity or a time-varying component of dark energy can be ruled out.//EOM//