Ahh, the phallus. In most sexually-reproductive species, half of the individuals lack one, while the other half is constantly trying to share theirs as much as possible with the first group, with varying degrees of success — bragging, fighting or impressing their way to the continuation of the species. Marvelous! 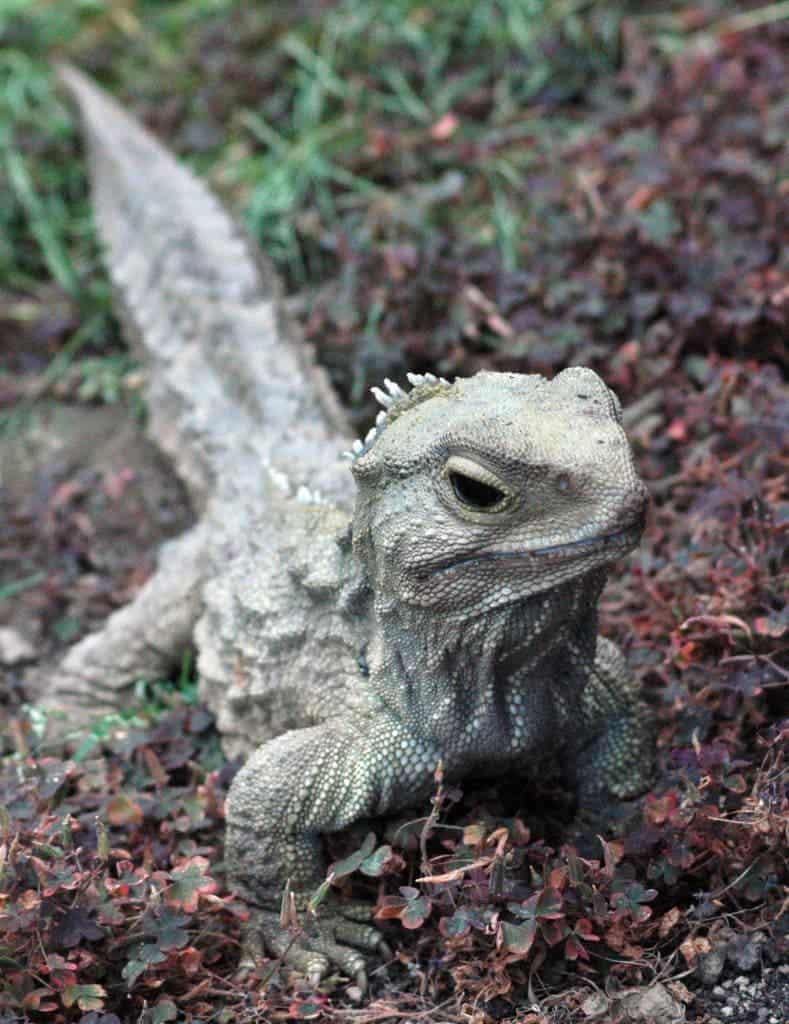 The tuatara. We’re gonna talk about him very soon now.
Image via wikipedia

However, for the importance it has in our lives both culturally — often associated with fertility and virility — and biologically, we don’t really know how it evolved. Did species develop it separately, as the most efficient solution to the problem of sexuality? Did we all get one from a common ancestor but some just kind-of got tired of it and developed other methods of insemination?

Thomas J. Sanger, Marissa L. Gredler and Martin J. Cohn believe that the latter explanation is correct, and have published a paper in Biology Letters detailing their findings on penile evolution.

The evolution of internal fertilization was a critical step towards the diversity of amniotes (animals that lay eggs or nurture it inside the mother’s body) we see today. In most cases, this process relies on a critical step: fertilization requires the deposition of male genetic material in the form of sperm, facilitated by the phallus, inside the female’s cloaca (for birds) or vagina (for mammals). Other species, such as 97% of all bird species and some reptiles, rely on cloacal apposition.

One such reptile, the tuatara or Sphenodon punctatus, provided the team with the biological niche they needed to solve the case — though resembling lizards, they are acually part of a separate lineage, belonging to the order Rhynchocephalia.  But there was a little problem; being an endangered species since 1895, they couldn’t use recent embryos to study the reptiles in the early developmental stages they were interested in:

“As the sister group to squamates [lizards and snakes], S. punctatus occupies an important phylogenetic position for resolving amniote genital evolution; however, acquisition of new embryological material is difficult owing to the close management of this species,” the team writes.

So they set out to look for suitable material and found four specimens that were donated to the Harvard Embryological Collection (HEC) in 1909 by Arthur Dendy, who owned the most comprehensive collection of this species. One of these specimens was just what they were looking for.

“We examined the historical records and concluded that of the four S. punctatus embryos sent to Minot [then curator of the Harvard Embryological Collection], one embryo, specimen 1491, is the ideal stage at which to examine the cloacal region for evidence of genital swellings.” 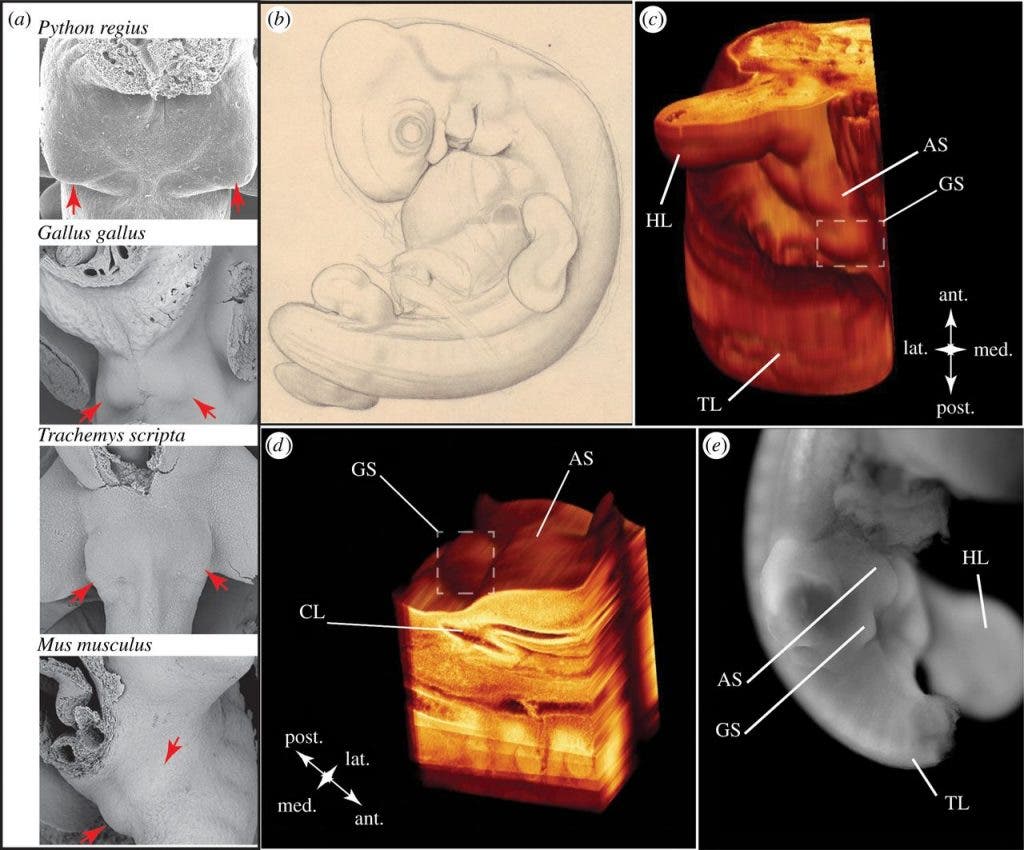 Initiation of amniote external genitalia consistently begins as paired genital swellings.
(a, red arrows) Specimens taken from indicated species.
(b) Illustration of tuatara embryo 1491 from the Harvard Embryological Collection (HEC).
(c,d) This embryo possesses genital swellings (GS) and anterior swellings (AS) adjacent to the cloaca (CL) at a stage comparable with when other amniote species are undergoing external genital morphogenesis.
Image via royalsocietypublishing, credit to authors.

Specimen 1491 was histologically prepared into 8µm thick sagittal sections, but the position of the animal’s body (image b) didn’t allow the team to study the genitals directly, so they reconstituted 82 slides into a 3D model they could analyze.

“Thus, the reconstruction of the S. punctatus cloacal region reveals the presence of the right genital and anterior cloacal swellings, indicating that although this species lacks an intromittent phallus as an adult, development of a phallus and cloacal lip is initiated in the embryo.”

“In chicken and quail, outgrowth of paired genital swellings initiates morphogenesis of the resultant genital tubercle, which later regresses owing to programed cell death. Our data indicate that the early stages of external genital development occur in S. punctatus embryos, and we suggest that the absence of an intromittent phallus in adult tuatara could result from a similar process of programmed cell death or diminished proliferation at stages later than embryo 1491,” the team concludes.

So what does this mean? Well, embryo development follows some wacky rules. When an organism evolves a new trait, it doesn’t actually loose the genetic information is had up to then, rather it’s being deactivated — this is why atavistic characteristics are sometimes developed. As the embryo matures and grows, it goes through developmental stages that won’t necessarily be retained — such as whale and dolphin embryos developing legs, then loosing them.

“A resolved hypothesis regarding the evolution of amniote external genitalia. Our observations suggest that the phallus evolved once and diversified among amniote lineages. Phylogeny after Chiari et al.”
Image via royalsocietypublishing, credit to authors.

As such, the presence of the genital swellings in an animal that lacks a phallus as an adult suggests that the organ was inherited from one common ancestor, and then developed into all the variations we see today.

“Taken together with previous studies of external genital development, the data from tuatara support the hypothesis that the amniote phallus had a single evolutionary origin that was followed by lineage-specific modifications that underlie the diversity observed in extant amniotes.”

The New Zealand tuatara (Sphenodon) is one of those unique animals that warrants revision for biology textbooks. The  lizard-like reptile that is the only survivor of a group that was globally widespread at the time of the dinosaurs uses its highly specialised jaws  to slice its food like a “steak knife”. Typically, chewing is associated with high metabolism in animals, but in this instance this is far from being the case.

Chewing: not just for mammals

The tuatara lives on only 35 islands scattered around the coast of New Zealand and was recently reintroduced to the mainland. Its diet consists of beetles, spiders, crickets, small lizards and, occasionally, sea birds.

Using a computer model, researchers at University of Hull proved the complex moving structures of the reptile’s jaw as it chews is prey. This allowed them to image the pattern in 3D and from all angles with unprecedented detail. The model revealed that when the tuatara chews, the lower jaw closes between two rows of upper teeth. Once closed, the lower jaw slides forward a few millimetres to cut food between sharp edges on the teeth, sawing food apart.

“Some reptiles such as snakes are able to swallow their food whole but many others use repeated bites to break food down. The tuatara also slices up its food, much like a steak knife.”

“Because mammals show the most sophisticated form of chewing, chewing has been linked to high metabolism. However, the tuatara chews food in a relatively complex way but its metabolism is no higher than that of other reptiles with simpler oral food processing abilities. Therefore the relationship between extensive food processing and high metabolism has perhaps been overstated,” said Lead author Dr Marc Jones, UCL Cell and Developmental Biology.

The tuatara provides an example in which specialisation of the feeding mechanism appears to allow a broader diet.

“The slicing jaws of the tuatara allow it to eat a wide range of prey including beetles, spiders, crickets, and small lizards. There are also several grizzly reports of sea birds being found decapitated following predation by tuatara,” Dr. Jones said.

“Although the tuatara-like chewing mechanism is rare today, fossils from Europe and Mexico show us that during the time of the dinosaurs (about 160 million years ago) some fossil relatives of the tuatara used a similar system and it was much more widespread,” he added.

The iconic New Zealand reptile was described in a paper published in The Anatomical Record.

The tuatara is not an iguana, it’s not a lizard, and it is very, very different than any other reptile alive today on Earth. In fact, recent studies suggest that it’s pretty different from any other vertebrate. It’s home is in New Zealand, which is known for eccentric life forms of all kinds: the kiwi, with long whiskers and feathers just like fur, the kakapo, the parrot that can’t fly and looks like an owl, and the giant weta, a cricket as big as your fist. However, as amazing and special as these animals are, they fade in comparison to the tuatara.

About 80 million years ago, the supercontinent Gondwana split up, leaving life on this paradise island evolutionary separated from the rest of the world. The tuatara is about 16 inches long, and it’s practically a living fossil – it hasn’t changed significantly in hundreds of millions of years. It has a third eye, the legendary but unexplained pineal eye, located on the forehead and used for registering light intensity and regulating body temperature.

But what is extremely weird is that a few regions of the tuatara DNA are evolving at an incredible speed, probably with the fastest mutation rate ever in vertebrates. The rapidly changing DNA sequences are limited to so-called neutral regions of the tuatara’s DNA, and affect rather fillings and not the basic “blueprint” of the tuatara. They are also very different from reptiles too.

“Their biology is quite distinctive,” said Charles Daugherty of the Allan Wilson Center for Molecular Ecology and Evolution at Victoria University of Wellington in New Zealand. “They have a unique type of hemoglobin, and their enzymes are set to function at lower temperatures than in most reptiles.” As a result, tuataras remain active at night, and in weather just a few degrees above freezing, said Dr. Daugherty, “at temperatures at which most reptiles couldn’t survive.”

But the tuatara gets even more awesome. They routinely live to 100 years, and often go above 150 or even 200; they also live it up – females can reproduce up until 80-100 years. They’re also mean and like to show off, and even fight when necessary

“They have crests they can inflate, to make them look big, and they stand very tall and start mouth-gaping at each other,” said Dr. Godfrey. “If one male doesn’t get the message, it will escalate into a physical fight.” They tear at each other’s crests and toes, they trade parasites. “During mating season, you can see the bright orange patches of mites on their necks,” said Dr. Godfrey. “It’s quite spectacular.”

Today, there are less than 50.000 tuataras, all of which are considered to be a national treasure.

Professor David Lambert and his team from the Allan Wilson Centre for Molecular Ecology and Evolution performeda study of New Zealand’s “living dinosaur” the tuatara. They recovered DNA sequences from the bones of ancient tuatara which are up to 8000 years old. The conclusions they drew were amazing: despite all the ods, the tuatara has evolved faster than any other animal.

Although it has remained largely physically unchanged over very long periods of evolution, they are evolving – at a DNA level – in a way that nobody would have believed.

“What we found is that the tuatara has the highest molecular evolutionary rate that anyone has measured,” Professor Lambert says.

They’ve surpassed the Adélie penguins, which had the previous record of evolution rate. The tuatara rate is significantly faster than for animals including the cave bear, lion, ox and horse.
Allan Wilson was a pioneer of molecular evolution. His ideas were controversial when introduced 40 years ago, but this new research supports them. Here’s what he had to say:

“Of course we would have expected that the tuatara, which does everything slowly — they grow slowly, reproduce slowly and have a very slow metabolism — would have evolved slowly. In fact, at the DNA level, they evolve extremely quickly, which supports a hypothesis proposed by the evolutionary biologist Allan Wilson, who suggested that the rate of molecular evolution was uncoupled from the rate of morphological evolution.”