Electric heavy trucks will soon be economically ready to compete with diesel trucks as battery technology continues improving, according to a new study. This could help address the growing carbon emissions from the transportation sector, which currently accounts for 14% of the global annual emissions.

Some researchers have long argued that electric trucks wouldn’t be able to match the costs of diesel ones because of the extra batteries needed for freight. More weight is less efficiency so electric trucks just can’t be better, some claimed. But this isn’t necessarily the case, according to a study by the Sweden-based think tank the Stockholm Environment Institute (SEI). A change, as they say, is a-coming.

“A tipping point is in sight for electric trucks,” Björn Nykvist, lead author and a senior researcher at SEI, said in a statement. “Battery technology is very close to a threshold that makes electric trucks feasible and economically competitive. All that is missing is one companion component: fast charging.”

Out of all the elements analyzed in the study, the availability of charging was seen as the most important to cover.

The researchers created a model where an electric truck operated for 4.5 hours and then charged for 40 minutes on a high-powered device. They found that the economics of the electric trucks per ton-kilometer improves with greater weight, driven by higher load capacity and increased energy savings as a function of weight.

The only problem is that the type of commercial fast chargers needed for the trucks don’t exist yet. It’s not as big a problem as it seems since the technology is just around the corner, but deploying them strategically will be quite the infrastructure challenge.

“If this infrastructure is put in place, it invalidates the old argument that electric trucks can’t match the range of diesel trucks. This makes electric trucks much more realistic,” Nykvist said in a statement. “A very heavy truck uses more diesel per kilometre than a lighter one, but that’s also a big savings potential if you can switch to electricity.”

Over the year, the availability of electric trucks in the US and Canada is expected to increase from over 70 models from two dozen manufacturers to at least 85 models from over 30 companies. This includes the Tesla semi, with pre-orders from Walmart, DHL, UP and PepsiCo, as well as electric vehicles from Arrival, Rivian and Nikola.

As manufacturers scale production, prices of vehicles are expected to come down. That’s also true for battery prices, which have declined 89% in the last decade and are expected to continue to fall. BloombergNEF’s annual Battery Price Survey found lithium-ion battery pack prices fell 13% in 2020 and will continue to do so.

This would help tackle the emissions of the transportation sector, which are on the rise. In the US alone, after a decline from their peak in 2005, transport emissions plateaued and have now risen every year since 2012. In 2016, the transport sector surpassed the electric power industry as the single greatest US emitter.

The study was published in the journal Joule.

For the first time, a driverless truck has completed a cross-country trip delivering freight. The autonomous truck delivered 40,000 pounds of butter from Tulare, California to Quakertown, Pennsylvania, finishing a 2,800-mile-trip in under three days.

The truck is operated by a Silicon Valley startup called Plus.ai. Just like any other autonomous vehicle, such as Autopilot-enabled Teslas, the truck employs an array of cameras, lasers, and a radar to recognize road signs, obstacles, and other vehicles on the road.

The truck traveled on interstates 15 and 70 before Thanksgiving, operating day and night, navigating through changes in elevation and bypassing unexpected obstacles, like road construction. It also drove through rain and snow smoothly. A human driver was always aboard, ready to take over if needed, while a safety-engineer monitored the performance of the vehicle.

Although the truck had to make some stops to take scheduled breaks mandated by law, it mostly drove autonomously. Most impressive of all, the driver didn’t need to engage during the trip, meaning there were no problems that required his intervention.

There are more than a dozen companies in the United States currently developing or operating autonomous freight delivery. For instance, Embark Trucks, a San Francisco-based startup, also completed a 2,400-mile cross-country trip. However, it took longer, finishing in five days, and carried no freight. The Plus.ai truck made the cross-country trip with freight, the first to do so — and right in the nick of time too since the end of the year is peak butter time.

Automated cross-country trips are important for freight operators because it is over long distances that you see a significant return of investment. A self-driving truck may be more expensive but it should pay for itself in the long-run.

About 30-40% of a long-haul shipment’s cost is the driver’s salary and auxiliary expenses (motels, meals, etc). A fully autonomous truck would cut that expense right away. It would also make faster delivery times because it could theoretically drive for 24 hours straight and save fuel thanks to its optimized driving.

It might take a couple of years because you see autonomous tracks regularly hauling freight around the country. The incentive, however, is immense and some experts believe autonomous trucks could regularly start delivering goods by 2022. That’s good news for the trucking industry and really bad news for truck drivers.

Elon Musk has hinted at the new Tesla truck for ages, and now it’s finally arrived. Like everything that Musk showcases, it’s sleek, innovative, and extremely promising. But also like everything Musk presents, it also leaves a lot of questions.

Developing an electric truck offers massive benefits, but also raises huge challenges. You get the chance to revolutionize one of the world’s most polluting industries (trucking), but the odds are stacked against you. For starters, you need enough power to move the mammoth car around, along with the big load trucks usually carry and a heavy battery. You also need to ensure a huge range, as trucks usually travel long distances and overcome the lack of aerodynamics.

Not everything is bad, however. Electric engines actually offer some advantages over conventional diesel engines. Namely, they generate a tremendous amount of torque, which is ideal for heavy-duty trucks. Many heavy-duty trucks also have 10 gear transmissions, to get the truck rolling fast enough for highways — but this also introduces a lot of wear and tear.

Tesla’s new truck, simply called the Semi, has one gear and no transmission. This drastically reduces wear and tear, saving money and time spent on transmission repairs. Furthermore, once the truck starts rolling, it can also use its huge mass to generate extra power to expand its range.

Still, the elephant in the room when it comes to electric trucks is the battery. Simply put, battery technology just hasn’t been at a point where it can power a truck. But Tesla Motors believe they have the case cracked. In front of a jam-packed audience, Musk presented the Semi to roaring applause. He says the trucks could go for up to 500 miles at maximum weight at motorway speeds, in spite of the heavy battery. Its diesel counterparts are able to travel up to 1,000 miles on a single tank of fuel so they have twice as much range, but Musk said diesel trucks were 20 percent more expensive to run per mile. Without cargo, the Semi can do 0 to 60mph in five seconds or reach 60mph in 20 seconds while carrying the maximum weight allowed on US highways — more than 36,000kg. Those are some impressive figures.

You can watch the full presentation here:

Musk also says the Semi features several other upgrades: it has a centered driver’s seat for a “more commanding view of the street,” replaces real mirrors with screens and cameras, and does a lot to reduce the “clutter” from third-party items and gadgets. But whether or not those are actually improvements remains to be seen. For instance, some have said that having a centered seat makes it more difficult to lean out the window when passing paperwork to the police or border patrol. It might also reduce visibility in some instances, especially for backing up. The lack of physical mirrors is also certain to make many drivers uneasy and can make for some unfortunate situations.

The inside of the Semi. Credits: Tesla.

As always, Musk’s products are a mishmash of brilliance, innovation, and hazard. If the Semi can do all he says it can do, it can be revolutionary. But can it, really? The question seems to be annoyingly floating around, and for now at least, there’s no clear-cut answer. However, electric trucks seem to be an inevitable development. It might not be now, next year, or the year after that — but it will happen sooner rather than later, and it will do a big difference. Despite advancements which have made trucks more efficient, the trucking industry contributes 1.6 billion metric tons of CO2 per year globally. If that can save money and make the streets safer, what’s not to like?

No price tag has been presented. Here’s the full technical sheet of the Tesla Semi: 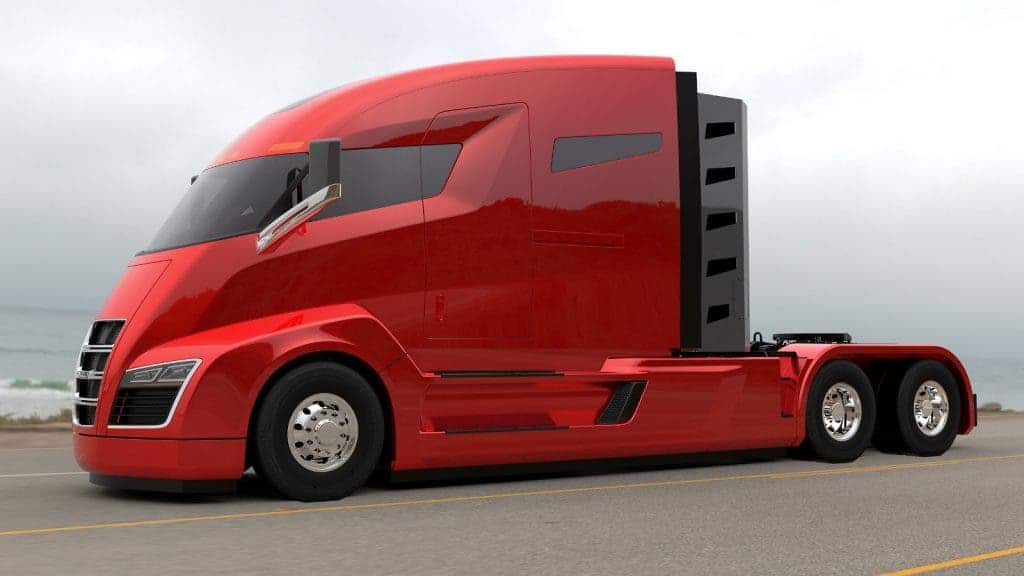 Tesla Motors is all the rage after it made 325,000 reservations for the upcoming Model 3 just one week after its release. Meanwhile, a company called the Nikola Motor Company — much less known among the general public, but already making a name for itself in the trucking industry — announced more than 7,000 truck reservations with deposits for an electric class 8 semi-truck, dubbed “Nikola One.” That’s $2.3 billion in orders!

Transportation is finally being disrupted

Incredible. 2.3 billion dollars in pre-orders with deposits in one month. Press release going out. Let's change the world @elonmusk

Nikola uses an annoying branding strategy that takes the first name of the man who went on to inspire the far more famous Tesla Motors. Effectively, the newly founded startup is looking to capitalize on Tesla Motors’ steam by imitating their strategy, mission, and even its name.

Well props to Tesla then, because I view it as a form of flattery. Elon Musk’s efforts to disrupt the transportation industry are paying off. His company is effectively changing the landscape with its all electric and far superior tech-wise products. So what if a startup wants in on the money? It just creates more disruption, which can only do good to an industry which is fundamentally the same as 50 years ago.

“Our technology is 10-15 years ahead of any other OEM (original equipment manufacturer) in fuel efficiencies, MPG and emissions,” Nikola CEO Trevor Milton said in a press release. “We are the only OEM to have a near zero-emission truck and still outperform diesel trucks running at 80,000 pounds.”

“We believe we will pass the current market leaders like Daimler, PACCAR, Volvo and Navistar in sales orders within the next 12-24 months,”

The Nikola One, despite the hype, isn’t a fully electric truck — it’s a gas-electric hybrid. Its specs are super impressive, though. We’re looking at a 2,000 HP truck with a 1,200 miles range, a 6×6 power train, 320 KWH batteries (they use the same batteries like Tesla — no surprise), regenerative braking, 3,700 FT. LBS of torque and a clever turbine design that constantly charges the batteries as the truck drives. According to company officials, the Nikola One drives at half the cost of a diesel-powered counterpart.

Reservations were made for only $1,500 so right now, the startup only made about $11 million. This means the company is in desperate need of capital, and they might just get the $300 million they’re looking for in an upcoming series A funding round.

For now, Nikola seems like an uneasy bet, but if their management is really serious about disrupting transportation, the industry only stands to win — and also the environment. Most goods, from food to electronics, are transported by freight trucks which account for 20 percent of all transportation-related greenhouse gas emissions.

This is a company worth following, though don’t let the name fool you. They need to prove themselves before any fair comparison to Tesla Motors can be drawn, let alone the famous inventor who gave the world AC power.