We’ve long known just how damaging extremist governments can be to the lives of the ones they rule over and to the world at large, but it seems that the art of ruling doesn’t leave room for innocence in any part of the world. The NPR was recently investigating into records pertaining to secret experiments and found the names of nearly 4,000 individuals that were exposed to mustard gas. The names are joined by a further 1,700 individuals that the NPR could only find a “last known location” for. 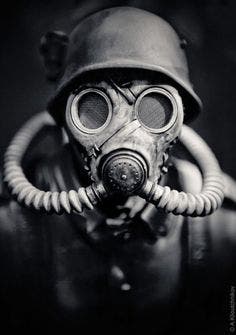 Mustard gas is a sulfur based compound used for chemical warfare that has the pleasant effect of causing blisters to form on skin and attacking optical tissue it comes into contact with. It can easily penetrate cotton, wool and other common fabrics, so special equipment is needed to protect soldiers against it — and in battle conditions there’s rarely enough to go around.

As the effects on the victims aren’t immediate, manifesting within 24 hours from contact and the pure vapors have no smell, very large doses can be administered to the subject without him or her knowing.

After this time, what starts out as an itch develops into full blown pustules filled with yellowish liquid that cover horrendous chemical burns. In high dosages, if inhaled, it attacks the lungs causing massive bleeding and blistering of the mucous membranes, leading to pulmonary edema.

It was extensively produced by the Imperial German Army starting with 1916 and used extensively in the static, trench-ridden battlefields of World War I, with terrible effect — and their memory lingered in the minds of armed corps world-wide.

So while the tests had the arguably understandable purpose of evaluating protective suits and gas masks, NPR’s investigation revealed something much darker — some trials were designed to look for racial differences (i.e. resistance to the gas) that could be exploited during combat, that required soldiers to be exposed directly to the compound.

And, in classic government fashion, the subjects weren’t even cared for:

“Officials at the Department of Veterans Affairs told NPR that since 1993, the agency had been able to locate only 610 test subjects, to offer compensation to those who were permanently injured,” the NPR page reads.

Considering NPR’s investigation took some 6 months and came up with almost ten times as many names, that’s hard to believe.

Anyway, if you’re curious to know if anyone you know was exposed to mustard gas, you can find a “work-in-progess” list on NPR’s webpage, here.