Carnegie Mellon University researchers have managed to fit the ever-so-convenient touchpad in a spray can. Using this technology, any surface, regardless of size or shape, can be turned into a working touchpad. 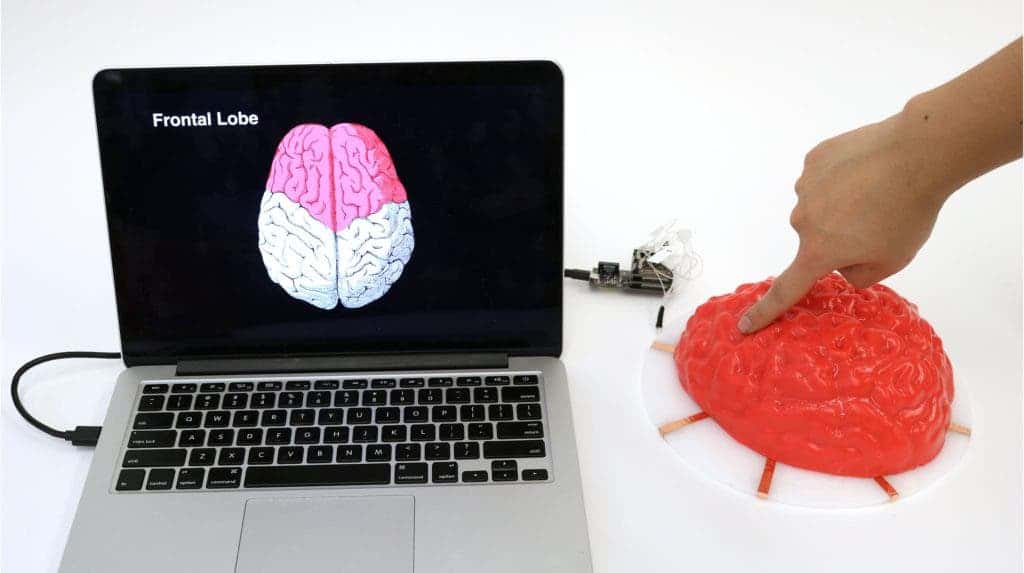 The researchers can turn a range of surfaces — even this brain-shaped Jell-O mold — into touchpads.
Image credits CMU.

We’re used to seeing touch sensitivity employed on flat, often small surfaces, such as tablets or smartphones. This mostly comes down to the cost associated with building the devices, and the need to install them on mechanically-resilient frames. But imagine you could take any finished object and then cheaply coat it in a touch-sensitive layer as easily as spraying some paint on it.

You can with this can

That’s what researchers at CMU have been working on. Dubbed Electrick, their spray can turn everything from walls to Jell-O into touch-sensitive sensors. The coating functions much like other touchscreens, through the shunting technology — when you touch the screen, the layers connect and a small charge is shunted to the electrodes. Several electrodes on the edge of the sensor/coating pick up these signals. By first applying electrically conductive paint-like layers onto objects and then connecting a series of electrodes to them, the researchers showed that they can pinpoint the exact point of touch on the surface using a technique called electric field tomography.

Electrick could solve some of the current limitations of touch-sensitive technology. For instance, large touch surfaces are expensive to produce, and flexible ones are still confined to research and development labs as of now. But the spray-on touch sensor can be applied “on almost anything” says Chris Harrison, assistant professor in the Human-Computer Interaction Institute (HCII), head of the Future Interfaces Group, and first author of the paper, taking on the shape as well as the flexibility of the base objects. The technology should be both accessible to hobbyists and compatible with common manufacturing methods, such as spray coating, vacuum forming, casting/molding, or 3D printing, the team reports.

The technology does have some limitations. In comparison to traditional touch devices, Electrick isn’t as accurate. But with a one-centimeter margin or error, it’s more than precise enough to comfortably allow the use of buttons, sliders, or other controls.

The team used the coating to cover objects including a 4-by-8 ft (1.2 x 2.4 meters) sheet of drywall, a steering wheel, a guitar, a Jello-O mold of the human brain, even some Play-Doh. They also used the coating to make an interactive smartphone case, which could, for example, open the camera app when held a certain way, and a game controller which could change the location of its buttons and sliders based on the game or user preference.

Overall, the team reports that the coating proved to be durable during their testing, but will not look into adding a protective coating atop the conductive layers to make the screens more wear-proof.

The findings will be presented at CHI 2017, the Conference on Human Factors in Computing Systems, in Denver later this week.

Touchscreen technology has been in use for many years, but when the first iPhone came out some six years ago, it totally changed front end design and user interface, because it brought the technology to the people, the common folk. You didn’t have to be a scientist to own or use a touchscreen device – it’s dead simple and fun. Just a few years later, everything is touch interface, and i’m not exclusively talking about smartphones or tablets here; even washing machines or electric shavers have been included. Touch interface incorporated in technology has definitely risen the bar for interactivity. Has it really revolutionized UI design, turning it upside down, however? Well, absolutely not, if you’re to compare it with what’s just around the corner – the Leap Motion system.

Image a device which only costs $70, can be plugged in via USB, and turns your notebook, tablet or TV into a virtual playground, in six degrees of freedom. Minority Report? No, this is better! If you haven’t watched the company’s presentation demos, do it now and prepare to be amazed. This might just be the biggest thing for user interface since the mouse!

Sure, you might cry that this is extremely similar to the Kinect, but believe me, after scouring the web through hundreds of blogs for more information on this piece of gold, the Leap is a lot more powerful. It’s 200 times more accurate than the Kinect, to the point that it can distinguish all ten of your fingers individually and track your movements to a 1/100th of a millimeter.

The device’s working principle is fairly simple in nature, if you choose to ignore the complex, yet beautiful development work that went into the back-end.  A number of camera sensors map out a workspace – a 3D space in which you operate as you normally would, with almost none of the Kinect’s angle and distance restrictions. For the current prototype, the workspace is about three cubic feet, but the only restriction here are the sensors – what a bigger workspace? Just choose bigger sensors.

Yes, you can become a FruitNinja master with this incredible motion sensor system, but trust me this is meant for something a lot deeper. The possibilities at stake are virtually limitless. Imagine browsing websites or organizing your files in the most natural of manners. You don’t need to learn to place two fingers apart, then drag to zoom and such. The system ensures that everything you’d want to do naturally in the real world can be transferred virtually. If you want to draw, you just use your finger or put out a pencil and start drawing. Want to pick up a ball in a video game, just mimic the grabbing action. Everything can be manipulated. Imagine a special app based on the Leap for remote surgery. Amazing!

Along the past few years, thousands of developers tried their best and some have released some incredibly useful and creative apps and releasing them to the public via Apple’s AppStore or the Android Market. Leap Motion officials stated that their system’s SDK will be able to do much more, however, and the possibilities appear to be limited only by your imagination.

The Leap is slated for release sometime between December and February. So, what do you guys think?