A titanic dinosaur discovered in Patagonia, Argentina, may be the oldest member of its lineage ever discovered.

The species, christened the quite cool name of Ninjatitan zapatai was a Titanosaurid, a lineage of massive plant-eating dinosaurs with long necks (they’re part of the sauropod family). All of them were quite hefty, with the smallest known titanosaurid being about as large as an elephant.

“During evolutionary history, sauropods had different moments, different ‘pulses’ of gigantism, which were not only related to the group of titanosaurs,” said Dr. Pablo Ariel Gallina, a paleontologist at the Fundación Azara in Maimonides University.

“There were large animals towards the end of the Jurassic period, such as Apatosaurus and Brachiosaurus. And, already in the line of titanosaurs, the pulse with the largest giants occurs towards the middle of the Cretaceous period with species such as Patagotitan, Argentinosaurus, or Notocolossus.”

N. zapatai was around 20 m (66 feet) in length, with a sizable neck and tail to go along. But its main distinguishing feature is its age — Ninjatitan zapatai lived during the Early Cretaceous, around 130 million years ago, making it the oldest known member of its lineage. Fossil records from that time are generally quite scant, not just for dinosaurs, making the discovery that much more valuable.

For starters, its existence gives us a lot of information about the wider ecology of the area during the Early Cretaceous. The specimen is proof that titanosaurian sauropods were already present and established in Patagonia at the time, likely even the wider southern hemisphere. It also supports the idea of a Gondwanan origin for Titanosauria,” the researchers said.

The 140-million-year-old postcranial remains of Ninjatitan zapatai were discovered in 2014 in the Bajada Colorada Formation in Neuquén province, Patagonia region, Argentina.

The paper “The earliest known titanosaur sauropod dinosaur” has been published in the journal Ameghiniana.

Titanosaurs belonged to a group of dinosaurs called sauropods — the largest terrestrial creatures that ever roamed the Earth. But while most sauropods disappeared during the Late Cretaceous 100 million years ago, Titanosaurs thrived during that period. However, the early evolution of this group is not that well known because not many fossils have been discovered.

An illustration of two titanosaurs in their natural environment. Image credits: Mark Wutton.

This is where Mnyamawamtuka moyowamkia comes in. Its name is derived from Swahili for “animal of the Mtuka (with) a heart-shaped tail”, in reference to the name of the riverbed (Mtuka) in which it was discovered and due to the unique heart-shape of its tail bones. Mnyamawamtuka was first discovered in 2004 when parts of its skeleton were found high in a cliff wall overlooking the seasonally dry Mtuka riverbed in Tanzania. Excavations continued, at times requiring extreme dedication: often, the digging team was suspended by ropes or climbing gear over the wall. If the digging would have been delayed even by just a few years, erosion might have destroyed much of this skeleton.

Researchers note that the finding is particularly important as it provides a much-needed puzzle piece in understanding Titanosaur evolution, as well as the general evolution of African fauna during the Cretaceous.

“Although titanosaurs became one of the most successful dinosaur groups before the infamous mass extinction capping the Age of Dinosaurs, their early evolutionary history remains obscure, and Mnyamawamtuka helps tell those beginnings, especially for their African-side of the story,” said lead author Dr. Eric Gorscak. “The wealth of information from the skeleton indicates it was distantly related to other known African titanosaurs, except for some interesting similarities with another dinosaur, Malawisaurus, from just across the Tanzania-Malawi border,” noted Dr. Gorscak.

An illustration depicting Mnyamawamtuka and the parts of its skeleton which have been uncovered. Image credits: Gorscak & O’Connor.

This isn’t the only important finding from the area. Among others, researchers have found evidence of two other titanosaurs (Shingopana songwensis and Rukwatitan bisepultus), a mammal-like crocodile (Pakasuchus kapilimai), evidence of the monkey-ape split, as well as early evidence of insect farming.

This new find also suggests a close relationship titanosaurs from Africa and South America — two continents which were joined together 180 million years ago.

“This new dinosaur gives us important information about African fauna during a time of evolutionary change,” said Judy Skog, a program director in the National Science Foundation’s Division of Earth Sciences, which funded the research. “The discovery offers insights into paleogeography during the Cretaceous. It’s also timely information about an animal with heart-shaped tail bones during this week of Valentine’s Day.”

The world-renowned Field Museum of Chicago, Illinois has a new prehistoric creature display gracing their halls and galleries. The place has been decked out with fossil reconstructions and artistic representations of a variety of prehistoric animals. Most famous, of course, are those of the dinosaurs — and one of the newest additions is Antarctic Dinosaurs.

Around 195 to 235 million years ago (an era which encompasses the Triassic period as well as a small portion of the Jurassic period), Antarctica was quite different from its modern-day appearance. The Antarctic would have been closer to the equator, making for a lush habitat filled with “rhinoceros-sized dinosaurs and crocodile-sized amphibians,” says Kate Golembiewski, the public relations/science communications manager at the museum.

The exhibition includes hands-on interactive sections which can bring out the child in everyone. A significant portion of the exhibit is dedicated to the history of Antarctica in respect to man’s journeying there and learning how to survive the harsh, frigid conditions. Altogether, there are four dinosaur species appearing in the exhibit.

Glacialisaurus, a herbivorous dinosaur, is included as is a group of small sauropodomorphs which were ancestors of the massive long-necked sauropods. The titanosaur Maximo, which is also on display at the Field, is an example of the towering sauropods which are thought to have evolved along this lineage. 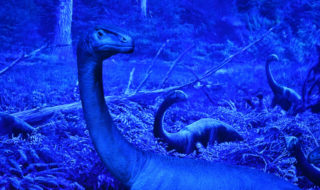 A life-like replica of the sauropodomorphs. Source: Of Intellect and Interest. Photo by John Tuttle.

Two of the dinosaur species on display were classified as sauropodomorphs. As yet, these new species have not been assigned personal scientific descriptions. The pride and joy of this entire display, however, is likely the Cryolophosaurus, a formidable predator of the area and era.

This carnivorous brute was a fierce hunter. The specimen present in Antarctic Dinosaurs measures 25 feet, which is not something you’d want to meet in a dark alley. Aside from the dinosaurs, there are other wondrous creatures which found their place in the exhibit.

It also features specimens of lichens, large amphibians, and even the skeleton of a sizeable aquatic carnivore known as Taniwhasaurus. It was a mosasaur, a relative to the giant marine animals depicted in the Jurassic World films, and is believed to have been able to reach lengths of close to 39 feet. It would have been a dangerous foe for any smaller swimmers of the Cretaceous period.

Altogether, the exhibit has something to offer everyone of every age, from child to adult, and of every interest, from history to paleontology, and is a great way to spend an afternoon or a day off. 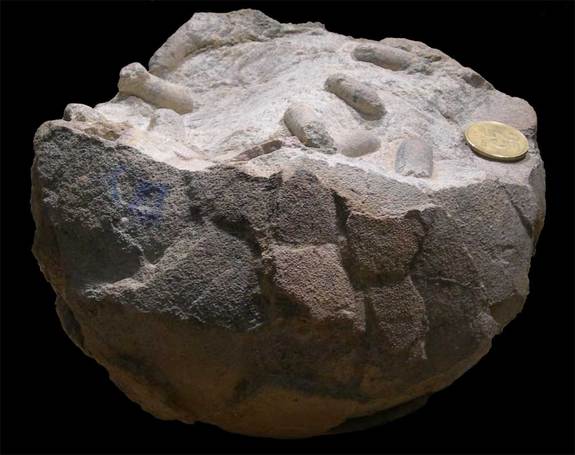 A recent discovery made by Argentinian paleontologist uncovered wasp cocoons hidden inside the 70 million year old fossilized egg of a titanosaur sauropod, suggesting that these ancient wasps used to dwell, consume and breed inside of them.

The find was made after researchers carefully analyzed one of the five titanosaur eggs uncovered back in 1989 in the Patagonia region of Argentina, and saw that  one of the broken eggs contained tiny sausage-shaped structures. These structures were an inch long and 0.3 inches wide, making them a perfect match for the shape of a wasp cocoon, namely the  Cretaceous wasp Rebuffoichnus sciuttoi, researchers believe.

Titanosaur was the largest creature to have ever walked the Earth, and while fossils of its eggs and that of wasp cocoons have been found before in considerate numbers, this is the first time they’ve been found together, suggesting a new relationship in the ancient ecosystem. 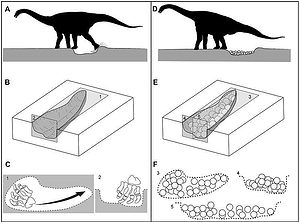 The wasps weren’t responsible for the damage of the eggs, however – they were too small and weak to break the thick titanosaur egg shell. Analyzing the various fractures in the eggshell, as well as other preserved insects found inside the egg, paleontologists theorize that it was open by force by some dinosaur scavenger who would’ve sucked its content dry. A second wave of creatures, likely ancient spiders, then came to dine on the now rotting egg, before finally the wasps attacked the spiders or even the initial scavengers. They would’ve then laid their eggs inside their targets’ bodies. The wasp offspring then spun their cocoons inside the rotting egg.

“Some cocoons have a truncated end that indicate the emergence of adult wasps,” study researcher Laura Sarzetti, of the Museo Argentino de Ciencias Naturales, told LiveScience.

“The presence of wasps, which are at the top of carrion food web[s], suggests that a complex community of invertebrates would have developed around rotting dinosaur eggs,” the researchers write in the journal article.

Now, although the bugs profited off the death of this particular egg, the critters were probably key in keeping titanosaur nests clean overall, added co-author Laura Sarzetti, another entomologist at the museum. For many dinosaurs, egg laying sites were kept in the same relative position for generations, and as such a cleansing of the decaying material left over from previous hatching was extremely important.

The newfound fossil cocoons are described in the July issue of the journal Palaeontology.