A motif present in virtually all Balkan countries’ folklore is that of the creator sacrificing part of himself for his work. In Romanian folklore, this theme surfaces in the story “Meşterul Manole“, who immured his wife in the walls of the monastery he was tasked with building. I couldn’t help but remember that story as I was reading about the Curies, who laid the groundwork on which our understanding of radioactivity is based.

Marie Curie, born Maria Sklodowska in Warsaw on November 7, 1867, was the daughter of a secondary-school teacher. She received a general education in local schools with some scientific training from her father. In 1891, she went to Paris to continue her studies at the Sorbonne University where she obtained Licentiateship in Physics and Mathematical Sciences. There, she met Professor of Physics Pierre Curie and in 1895 they got married.

But that’s just context — this story starts in 1895, when German physicist Wilhelm Roentgen discovered X-Rays but couldn’t uncover the mechanisms by which they formed. One year later, in 1896, French Nobel Laureate Henri Becquerel discovered that uranium salts spontaneously emit radiation very similar to X-Rays and proved that they originate from the uranium atoms.

Intrigued by these findings, Marie started her own research on pitchblende, today sought-after as an uranium ore. Using a version of the electrometer that her husband had developed fifteen years earlier, she discovered that the “uranium rays” caused the air around the samples to simply conduct electricity. Using this method, she observed that the pitchblende with higher uranium content would give off stronger radiation. She also recorded this behavior in minerals containing thorium.

Then one day, as she was performing radioactivity measurements on a samples of pitchblende, she recorded a much higher radioactivity than its uranium content would allow for — and there’s no thorium in pitchblende. The only explanation was the presence of another, unknown radioactive element. This is when Pierre, excited by the idea of discovering a new element, put his own research aside and started working with Marie.

The two would go on to discover Polonium, named for Marie’s home country, and Radium, from the Latin word for ray, in 1898. They also coined the term “radioactivity” to describe the effects seen by Becquerel. Either together or separately, they published more than 32 papers, including the first paper to describe how tumors can be destroyed by exposure to radium. Their work attacked the previously held beliefs that atoms are indivisible.

Their work wasn’t even sponsored by the University, the couple drawing on private, corporate and government funds. Unaware of the dangers they were exposing themselves to, they worked either in their home laboratory or out in a converted, leaky shed next to the School of Physics and Chemistry. They wore no protective gear, just woefully inadequate lab coats.

Their achievements and vision helped shape the world as we know it. But as Uncle Ben used to say, “with great scientific results comes great genetic damage by processes you don’t yet fully understand,” or something close to that.

The Curies’ work literally bathed them in radiation, day in and day out for decades. They handled samples without any care or protective gear. They took the pieces of radium they were able to refine — and today we know this is the most radioactive element in the periodic table — in their bare hands to examine. Even when she wasn’t in the lab, Marie carried her passion with her: she would have test tubes of radioisotopes in her pocket or stashed in her desk drawer.

The Curies knew about radioactivity but had no idea of the damage it was wreaking on them. Their research attempted to find out which substances were radioactive and why, so many dangerous elements–thorium, uranium, plutonium–were just sitting there in their home laboratory.

“One of our joys was to go into our workroom at night; we then perceived on all sides the feebly luminous silhouettes of the bottles or capsules containing our products. It was a really lovely sight and one always new to us,” she wrote in her autobiography.

Pierre died 19 April 1906, aged 46, run over by horse-drawn carriage on a rainy day in Paris. Marie continued their research and had several breakthroughs. She died at age 66 in 1934 from aplastic anemia, believed to be an effect of her prolonged exposure to radioactive materials.

Now, researching any famous historical figure is a daunting task, and there are mountains of obstacles to overcome if you want to get your hands on any of their papers or objects. But in the Curies’ case, it’s actually dangerous to do so. Because of how they worked, their papers, clothes, pretty much every worldly possession is still dangerously radioactive — and will be for at least 1,500 years to come. If you want to look at her manuscripts at France’s Bibliotheque Nationale, you first have to sign a liability waiver. Only then can you access the papers, which are stored in a lead-lined box.

Their house remained in use up to 1978 by the Institute of Nuclear Physics of the Paris Faculty of Science and the Curie Foundation. Authorities finally became aware of how insanely dangerous it was when people in their neighborhood, suffering from very high rates of cancer, blamed the Curies’ home. The building and laboratory were decontaminated in 1991.

Marie Curie was an incredibly gifted person, and her achievements speak for themselves. From a humble birth, she was to become the first woman to ever hold the position of Professor at the University of Paris, the first woman to win a Nobel prize, the first and only woman to win it twice, the only person to have ever received the award in different fields of research and the first woman to be entombed for her merits at the Panthéon in Paris. Pierre was a pioneer in the fields of crystallography, magnetism and piezoelectricity, in addition to his work with Marie, for which he jointly received the Nobel Award.

Together, these two brilliant people forever changed how we understand the world we live in. They did so at a huge cost, with incredible levels of radiation exposure, that would in the end claim Marie’s life. But by tackling some of the deadliest forces known to man with their bare hands, they earned life unending in the scientific community.

There seems to be a global trend against atomic energy, even though coal is much, much more dangerous in the long run. Germany, for example, has announced giving up all of its nuclear energy until 2022, in what has been called by many a rash and uncalculated move. However, on the other hand, other people are going for a different, more sane approach. 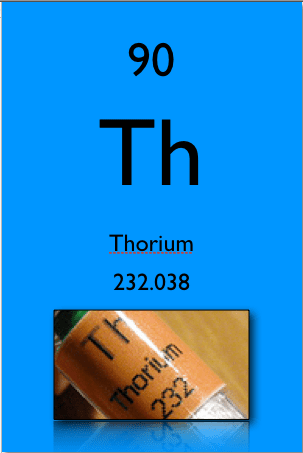 Kirk Sorensen believes safe nuclear power can contribute significantly to the world’s energy future – provided that reactors run on liquid thorium fuel instead of solid uranium, like it is done today. Showing the courage and determination behind his claims, he launched his own company, called Flibe Energy, which aims to start the first thorium reactors in 5 to 8 years.

Sorensen claims he also wants to revefine the general opinion on nuclear energy, showing how relatively clean and cost effective it is, contrary to the popular belief, which fears nuclear waste and nuclear power accidents. This mission is extremely tougher after the incidents which took place at the Fukushima plant in Japan.

“In the 40s and 50s they had an expansive definition of what nuclear power was – it wasn’t just solid fuel uranium reactors,” said Sorensen, who is Flibe’s president. “But that’s what it has come to mean now.”

What is ironic is that Thorium lost the battle against Uranium because it doesn’t have any lethal waste produts, like Uranium has Plutonium for example; thus, the waste couldn’t be used for military purposes, which was a clear goal during the Cold War years. Today, other countries, especially China and India are pursuing Thorium reactors.

Although in some cases Thorium does produce Plutonium as a waste product itself, the waste is less hazardous than other mixes of plutonium waste and there is much less of it. Also, Thorium based fuels are much more effective than Uranium, so the same amount of energy could be produced with less fuel.

“The hotter you can get, the more efficiently you can turn heat into electricity,” said Sorensen. “Typical reactors today, they only get about one third conversion efficiency. We can get about half.” He also claims that in his design, thorium “isobreeds”, meaning it creates as much fissile fuel as it burns up.

Of course, perhaps the most powerful enemy he will have to face is the nuclear supply chain which is heavily vested in solid uranium 235. But this seems like a very healthy move, and one we should definitely keep an eye out in the following years.