Temperature is an important physical parameter which greatly influences a system. Monitoring and/or manipulating this state parameter with great accuracy is thus of great importance to scientists. Recently, researchers part of  DARPA’s Quantum-Assisted Sensing and Readout (QuASAR) program proved a new technique that allowed them to measure and control temperatures at the nanometer scale inside living cells. Measuring temperatures at such fine spatial resolutions will allow for better assessment of the thermal performance of high grade materials, cell-specific treatment and other health related applications.

The QuASAR team, led by researchers from Harvard University, were able to measure sub-degree variations over a large range of temperatures in both organic and inorganic systems at length scales as low as 200 nanometers by using an ingenious set-up, along with gold nanoparticles and tiny diamond sensors. The latter is where the innovative part of the research lies. 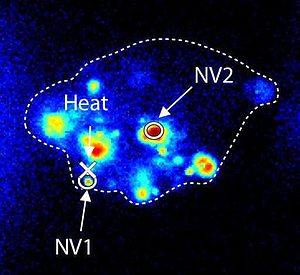 Confocal scan of a single cell. The white cross corresponds to the position of the gold nanoparticle used for heating, while the red and blue circles represent the location of diamond sensors used for thermometry. The dotted white line outlines the cell membrane. (Credit: DARPA)

Diamonds have naturally occurring imperfections known as nitrogen-vacancy (NV) color centers, with each center capable of trapping one electron. Temperatures fluctuations causes the diamond lattice to expand or contract, just like at the macroscale – think of the dilation and contraction of railway tracks when its hot or cold, respectively.

This lattice structure variation also causes changes in the spin properties of the electron, measured using a laser technology, which can then be correlated with temperature.

To demonstrate their research, 100-nanometer-diameter gold particles were implanted  into a human cell alongside the diamond sensors, which the scientists then heated using a heating laser. By monitoring the diamond sensors, researchers could characterize the local thermal environment around the cell. Shifting the power of the heating laser, as well as the gold nanoparticles concentration, allows for modification of the environment.

Using such a technique, researchers could have access to high resolution thermal insight and study, for instance,  nanoscale cracking and degradation caused by temperature gradients in materials and components operating at high temperatures. The electronics industry, where finely-tuned tiny components are at play, might have a lot to benefit. Also, since diamond is inert and thus doesn’t interfere with chemical reactions, the technique could be used to monitor and control chemical reactions at tiny shifts of temperature.