A half a million year old human tooth was discovered in France in a place called Tautavel, one of Europe’s most important prehistoric caves. Anthropologists hailed the discovery as an extremely important one, with chief researcher Tony Chevalier calling it a “major discovery”. 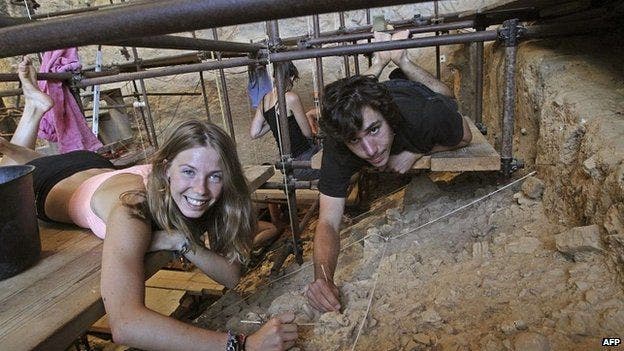 Volunteer archaeologists Camille and Valentin pose for the cameras in the Arago cave. Camille, 16, found the adult tooth, which dates back 565,000 years

Volunteer Camille, 16, was working with an archaeology student when they found the tooth. They are among the hundreds of archaeology trainees or volunteers come to dig out the Tautavel cave, searching for evidence of early human inhabitants.

Older human fossils are known in Europe (dating back to 1.2 million years ago), but this one bridges a gap in the fossil evidence in the Lower Paleolithic. Thousands of other finds were made in the same site, including tools and bones from animals, especially horses, reindeers and buffalos.

“We believe these men have lived for a long time in the cave or have regularly come back into it,” Chevalier said. “We also know that the area was quite cold at the time. It was a steppe, with no trees. There had to be some long periods with snow.”

The owner of the tooth – a very worn lower incisor – lived during a much colder climate than today’s; he and his people hunted horses, bisons and reindeer, and used tools. They took cover in caves.

“A large adult tooth – we can’t say if it was from a male or female – was found during excavations of soil we know to be between 550,000 and 580,000 years old, because we used different dating methods,” paleoanthropologist Amelie Viallet told the AFP news agency. “This is a major discovery because we have very few human fossils from this period in Europe,” she said.