Bacteria and fungi with the ability to withstand the drugs meant to kill them are now causing 1.2 million deaths every year, according to a global study. This represents a big jump from previous estimates of 700,000 deaths a year, and has prompted researchers to call for concentrated efforts that include infection prevention and vaccination to deal with antibiotic resistance.

Antimicrobial resistance (AMR) has been described as the most alarming issue for human health, expected to cause up to 10 million deaths after 2050 – the same as the number of people that die from cancer every year in present times. It can affect people at any stage of life, also affecting the agriculture, veterinary and healthcare industries. It’s also a problem that will likely grow more and more as time passes.

The problem roughly goes like this: when a new antibiotic is introduced, it is generally very good at killing the pathogens it’s meant to kill. But in time, bacteria and fungi can grow more and more resistant to it, especially if people don’t take antibiotics properly. Evolutionary pressure pushes the pathogens to develop more and more resistance, until they can render the antibiotic useless. We’re already seeing this with some strains of gonorrhea, which are virtually untreatable, and several other types of bacteria. This means we constantly need a fresh supply of antibiotics to ensure we can defeat these bacteria and fungi, but developing new antibiotics is slow — slowly but surely, we’re losing the upper hand.

The World Health Organization (WHO) warned last year that none of the 43 antibiotics in development as well as the recently approved medicines are enough to take antimicrobial resistance. Of the 43 drugs in development, 26 target dangerous superbugs, but they are derivatives of existing classes of antibiotics, the WHO warned.

“AMR is a leading cause of death around the world, with the highest burdens in low-resource settings. Understanding the burden of AMR and the leading pathogen–drug combinations contributing to it is crucial to making informed and location-specific policy decisions, particularly about infection prevention,” the researchers wrote.

The effects of superbugs

The Global Research on Antimicrobial Resistance report, published in The Lancet, is based on modelling that incorporates a wide range of data sources – including lab results, hospital records and surveillance information from pharmaceutical companies. It’s the first comprehensive assessment of the global burden of AMR, the researchers said.

The analysis covers more than 200 countries and territories. AMR was directly responsible for 1.27 million deaths, and associated with 4.95 million deaths, in 2019 – more than malaria or HIV/Aids. Hundreds of thousands of deaths happen due to common and previously treatable infections, as bacteria that cause them is now resistant to treatment.

People of all ages are affected by AMR, the researchers said, with young children being particularly at risk. One in five deaths happened in kids under five years old. AMR’s impact was described as more severe in South Asia and Sub-Saharan Africa. However, data was limited for some regions, especially for low and middle-income countries, which could alter the estimates.

Addressing the challenge of AMR will require a set of intervention strategies, the researchers said. Infection prevention and control is the most important area, including community-based programs and hospital-based infection prevention. Vaccination programs can also reduce AMR emergence, even for pathogens without vaccines.

“Minimising the use of antibiotics when they are not necessary to improve human health—such as treating viral infections—should be prioritized,” the researchers wrote. “Maintaining investment in the development pipeline for new antibiotics—and access to second-line antibiotics in locations without widespread access—is essential.”

The study was published in The Lancet.

As if superbugs weren’t scary enough, researchers have recently learned that they can easily jump from humans to animals where they adapt and develop before returning back to humans.

Antibiotic resistance has slowly crept into our lives, up to the point where it has become one of the most challenging medical problems of our times. The World Health Organization says we’re not ready to deal with this problem and, already, some pathogens are becoming untreatable. Well, I don’t mean to alarm you, but it gets a bit worse.

MRSA, a classic example of such a pathogen (also called a superbug), can cause serious infections and is resistant to most antibiotic treatments. MRSA, which is short for methicillin-resistant Staphylococcus aureus, can be found anywhere but is most commonly found in healthcare settings, such as hospitals. It managed to develop an impressive resistance to treatment and is now a major source of concern for doctors.

“In the case of MRSA, these bacteria have also spread in hospitals almost world-wide,” says Jukka Corander, professor at the University of Helsinki, who was a member of the international research team that mapped several millennia of the evolution of the staphylococcus bacteria.

Corander and colleagues sequenced whole genomes of this superbug, taking a large sample from different animals as well as humans. They analyzed the DNA changes that helped the bacteria to adapt to new host organisms over thousands of years.

Although animals like cows are still the source of many MRSA infections around the world, it seems to have originated in humans. Judging from their genetic changes, the pathogen was able to infect cows as soon as we domesticated them, bouncing from one species to another.

Remarkably, when it jumps to a new species, it hijacks new genes to help it adapt and stay alive in the long term. Most importantly, some of these genes can give the bacteria resistance towards commonly used antibiotics, eventually putting the ‘super’ into superbugs.

“The capacity for some pathogens to jump into different host-species populations is a major threat to public health and food security,” researchers write in the study. “Staphylococcus aureus is a multi-host bacterial pathogen responsible for important human and livestock diseases.”

Researchers also highlight that it’s more important than ever to find these infections before they get the chance to spread and do massive damage.

“Our observations give emphasis to the importance of detailed epidemiological monitoring, so that strains with the potential to cause epidemics can be discovered as early as possible,” Jukka Corander says.

Here are a few small things we can all do to try and limit antibiotic resistance:

The study has been published in Nature. 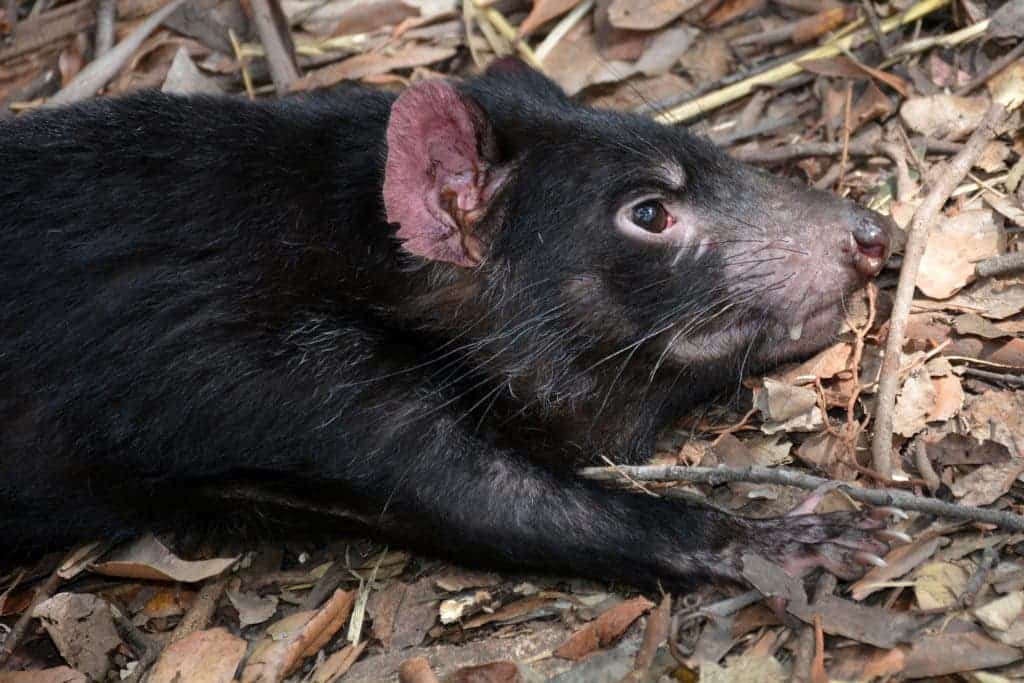 Leading medical societies have warned time and time again that antibiotic resistance is looming and the effects could prove catastrophic. While some are working on synthesizing new classes of antibiotics in the lab, other groups are focusing on finding them in nature. After more than three years of research, Australian researchers think they found one of the most promising compounds against superbugs in the milk of an adorable, yet highly aggressive marsupial: the Tasmanian devil.

The discovery was made by a team at Sydney University who sequenced the devil’s genome. Devil mothers only need 21 days to gestate a pup, after which development continues in the pouch, as is the case with most marsupials. Given the short gestation and knowing a pouch is far from being the most sterile environment, the researchers presumed that the devil momma’s milk has to offer strong antimicrobial resistance.

Eventually, they found devil milk contains six varieties of peptides belonging to a class called cathelicidins, which act as natural antibiotics. Humans only have one, but most marsupials seem to have them in great abundance. Opossums have twelve and the tammar wallaby carries eight.

The peptides were replicated artificially then tested against a variety of germs, some of whom the most dangerous known to humans. The peptides proved effective against everything the researchers put out. Among the germs was Staphylococcus aureus, a bacteria that’s found in the nose and skin of 30 percent of people. While it’s harmless most of the time, the bacteria can prove fatal if it reaches the blood stream.

Another bacteria was enterococcus, which some strains are already resistant to vancomycin, one of the strongest antibiotics in our arsenal. 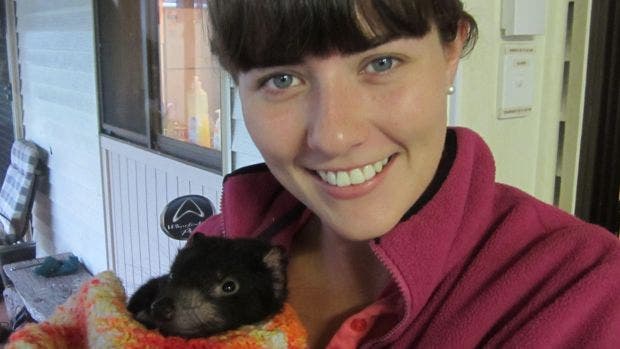 Last year, an 18-month review into antimicrobial resistance found superbugs might kill 10 million people a year by 2050 or more than cancer.

“There are potential pathogens present in the devil microbiome, so the fact that the under-developed young in the pouch don’t get sick was a clue something interesting was going on,” said Emma Peel, one of the authors of the study published in Scientific Reports. “That’s what inspired our most recent study.”

It’s remarkable that a creature that’s on the brink of extinction might one day save millions of human lives. In only ten years, 80 percent of Tasmanian devil populations have collapsed at the hand of a nasty transmissible face cancer with an almost 100 percent fatality rate. Luckily, some individuals have developed resistance and it seems like the devils will survive.