A city under siege. Many of the outlying buildings are old, dry, lifeless shells of their former beauty as nearly 50 percent of the population is wiped out, consumed by ravenous invaders. And the only hope of lifting the siege lies with a poison injecting, yellow robot.

Awesome, we should make it into a movie

But we’re already doing much, much better; we’re making it a reality. The “city” is Australia’s Great Barrier Reef, plagued by an overpopulation of Acanthaster planci, or Crown-of-Thorns Starfish (COTS), a species that over the last 30 years has chummed down on nearly half of the Reef’s population of corral. But help is on the way, as scientists and engineers teamed together to create the ultimate in yellow starfish de-population technology, the COTSbot. 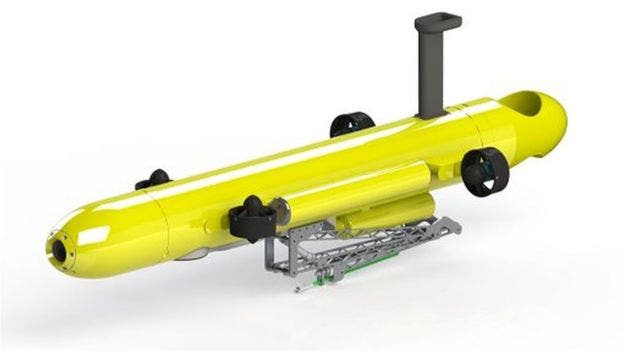 *The audience gasps at the sleekness, the yellowness of this fearsome guardian*
Image via bbc

The COTSbot, an autonomous underwater vehicle developed by Matthew Dunbabin and Feras Dayoub of the Queensland University of Technology, completed its first sea trials this week in Queensland’s Moreton Bay and is set to begin its grim work this December.

The bot lies on stereoscopic cameras for depth perception, pitch-and-roll sensors to keep it stable, and GPS systems to make sure it does not stray from it’s path of destruction. It also has a state-of-the-art computer vision system working in tandem with the cameras to identify targets.

The software was “trained” with thousands of still images of the reef and videos to help the robot recognize the starfish. If the robot is unsure whether an object is a COT starfish, it will snap an image of it and ask a human to confirm. A yes or no answer gets wrapped into the robot’s machine-learning algorithm so that it learns and advances its technique for ultimately finding the starfish without any human intervention.

But at the center of its instruments, and arguably the most fearful should one find himself in a particularly starfishy state, is a pneumatic injection arm designed to deliver a lethal dose of bile salts into the Crowns-of-Thorns. It can deliver more than 200 lethal shots in the eight hours it can stay submerged before its batteries give out.

“We see the COTSbot as a first responder for ongoing eradication programs — deployed to eliminate the bulk of COTS in any area, with divers following a few days later to hit the remaining COTS,” Dunbabin said in a press statement.

A little insight into the villains 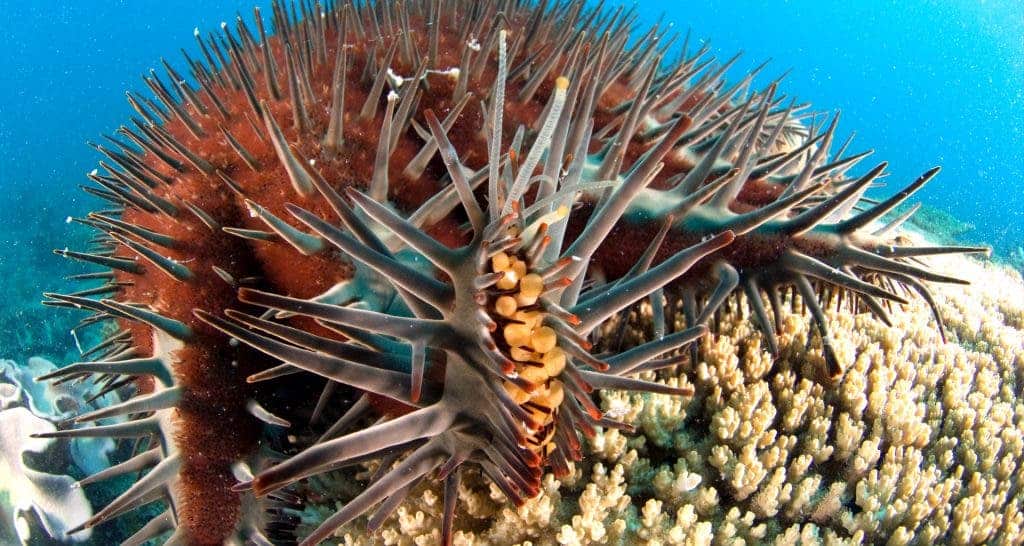 The Crown of Thorns starfish.
Image via scienceinpublic

COTS are not usually an invasive species, and they’re not even native to the Reef. Scientists have a couple of theories for why the starfish population has exploded, but it seems to be a combination of fewer predators — thanks to fishing and shell collecting — as well as wastewater runoff, which increases plankton blooms that serve as food for crown-of-thorns starfish larvae.

Between now and December, the QUT roboticists will train COTSbot on living starfish at the Great Barrier Reef. It won’t inject the brine until a human allows it, but after training, COTSbot will be on its own.

Reefs are constituted from aragonite structures produced by living organisms, found in shallow, tropical marine waters with little to no nutrients in the water. A reef is the result of generations of reef-building corals, and not just corals, but also, other organisms. They are take a huge amount of time to form and are fragile – but they are easily destroyed by a number of things.

The importance of coral reefs is humongous. They support an extraordinary biodiversity and are a very important part of our planet. But on the other side, human activity is the biggest danger to the reef and it is intesifying at great rates, threatening to have a catastrophic impact on underwater ecosystems.

The live food fish trade has been implicated as a driver of decline due to the use of cyanide and other chemicals in the capture of small fishes. Finally, above normal water temperatures, due to climate phenomena such as El Niño but more commonly global warming, can cause coral bleaching (the loss of intracellular endosymbionts, without which corals cannot survive). According to The Nature Conservancy, if destruction increases at the current rate, 70% of the world’s coral reefs will have disappeared within 50 years. This would be a disaster for our planet.

But a fishing ban around Apo Reef, the largest coral reef in the Philippines and the second largest contiguous reef in the world after the Great Barrier Reef is a thing which is probably going to be a step in stopping the fading of the reef.

“This ‘no-take’ zone will allow the reef and its residents ample time to recover from years of fishing,” stressed John Manul of WWF-Philippines. The reef has 27,469-hectare and it is surrounded by mangrove forest, which serves as a source of food, nursery and spawning ground of several coastal fish and marine species.

“Unfortunately, Apo is plagued by millions of these starfish, probably due to a lack of natural predators like the giant triton, napoleon wrasse and harlequin shrimp,” said Gregg Yan of WWF-Philippines. “We hope that the ban will ensure protection of these predators and the many other reef species.”. The reef needs us and it is our duty to shelter it; or think that without the reef the planet is dying. Look at it how you wish.