Researchers at the University of Bath, UK, report that an extremely common bacterium is developing antibiotic resistance. 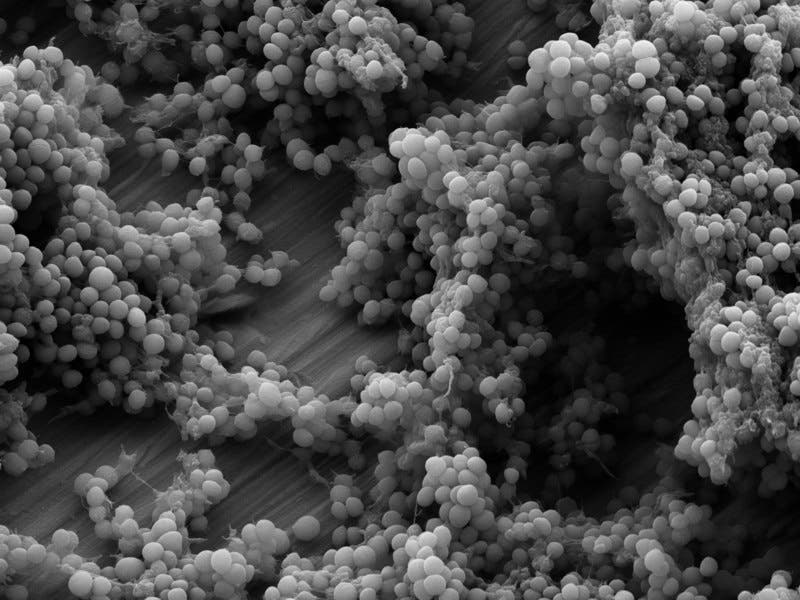 A Staphylococcus epidermidis biofilm formed on a titanium substrate.

MRSA, E. coli, they’re all very scary. But new research says there’s a newcomer to the Scary Table: Staphylococcus epidermidis, a widespread species that lives on our skins. A close relative of MRSA, this bacteria is a leading cause of infections (some of them life-threatening) following surgery.

It’s abundant, widespread, generally overlooked — and rapidly becoming resistant to antibiotics, warn researchers at the Milner Centre for Evolution at the University of Bath.

The team says we should take the threat posed by S. epidermidis much more seriously than we do today. They recommend taking extra precautions especially in the case of patients with heightened risk of infection that are due to undergo surgery.

The researchers started by retrieving samples of the bacteria from patients who developed infections following following hip replacement, knee joint replacement, and fracture fixation operations. Then, they compared the genetic material of these strains with those in swab samples harvested from the skin of healthy volunteers.

They report identifying a set of 61 genes that allow some strains of S. epidermidis to cause life-threatening infection. These genes help the bacterium grow in the bloodstream, avoid the host’s immune response, make the cell surface sticky so that the organisms can form biofilms, and make the bug resistant to antibiotics, they write. This finding, the team hopes, will further our understanding of why some strains can become infectious — in the future, this should help us keep the risk of post-surgery infection with S. epidermidis at bay.

The team also found that a small number of (healthy) individuals carry a much more deadly strain of the bacteria on their skin. Determining which strain (relatively harmless, dangerous, or one of these very dangerous ones) a potential patient carries on their skin before surgery would help doctors prepare extra hygiene precautions as needed.

“[S. epidermidis has] always been ignored clinically because it’s frequently been assumed that it was a contaminant in lab samples or it was simply accepted as a known risk of surgery,” says  Professor Sam Sheppard, Director of Bioinformatics at the Milner Centre for Evolution at the University of Bath and the study’s lead author. “Post-surgical infections can be incredibly serious and can be fatal. Infection accounts for almost a third of deaths in the UK so I believe we should be doing more to reduce the risk if we possibly can.

“Because the bug is so abundant, they can evolve very fast by swapping genes with each other,” he explains. “If we do nothing to control this, there’s a risk that these disease-causing genes could spread more widely, meaning post-operative infections that are resistant to antibiotics could become even more common.”

The paper “Disease-associated genotypes of the commensal skin bacterium Staphylococcus epidermidis” has been published in the journal Nature Communications. 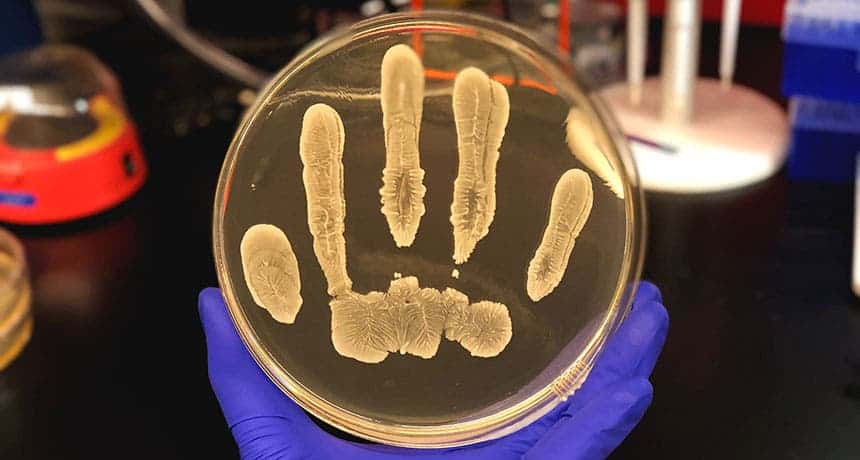 The discovery came as a surprise for the US researchers, who were studying the antimicrobial effects of various Staphylococcus epidermidis strains when they observed something intriguing: the mice treated with one particular strain became very resistant to skin cancers.

The compound produced by this strand is called 6-N-hydroxyaminopurine, or 6-HAP for short, and it resembles one of the building blocks of DNA.

“Because of that structure, we wondered if it interfered with DNA synthesis,” said Richard Gallo of the University of California, San Diego, one of the researchers on the study.

Next, researchers tested 6-HAP’s properties in a tube. The substance blocked the enzyme that builds DNA chains and prevented the chains from growing. 6-HAP only stopped DNA formation in different types of cancerous cells grown in the lab. When it was tested on normal skin cells, the compound was not able to stop DNA formation. Scientists discovered that certain enzymes in normal skin cells deactivated 6-HAP, and the tumor cells tested appeared to lack those enzymes. The research team also observed that 6-HAP worked both when injected and when applied topically.

Scientists injected mice with skin cells and separated them into two groups. One group received a shot of 6-HAP, while the other one didn’t. All mice had grown tumors, but the animals who received 6-HAP shots had tumors about two times smaller than the control group.

Next, scientists applied S. epidermidis on the backs of hairless mice subjected to UV rays. Some mice got a strain that makes 6-HAP; others got a strain that does not. After being periodically exposed to UV rays for 12 weeks, the first group developed only one tumor each, while rodents in the second group had grown four to six tumors.

Mice treated with a strain of S. epidermidis that does not make the compound 6-HAP and then exposed to ultraviolet rays developed UV-induced tumors (left). The skin of mice who got a strain with the compound remained largely normal (right).
T. Nakatsuji Et al/Science Advances 2018

S. epidermidis strains gained the ability to stop DNA synthesis to inhibit the growth of other bacteria. By doing so, S. epidermidis protects its homestead from other invading pathogens.

“Perhaps we evolved to provide a safe haven for these organisms because they also benefit us when they’re doing this,” Gallo says.

Then, researchers wanted to see how many people had the 6-HAP strands living on their skin. They did a small study of existing genetic data from the human skin microbiome and found that approximately 20 percent of the human population have S. epidermidis strains that make 6-HAP on their skin.

Additionally, 6-HAP was also able to block DNA synthesis in lymphoma cells. It seems like this compound is really something, right? Of course, doctors still have to fully understand how this bacteria interacts with its host before integrating it in treatments. Still, this is a great discovery. Maybe, in the future, researchers will develop skin probiotics to protect against infections and skin cancer.

The paper was published in the journal Science Advances, on February 28th, 2018.