Scientists have completed the most precise measurement of the Universe’s rate of expansion to date,  but the result just isn’t compatible with speed calculations from residual Big Bang radiation. Should the former results be confirmed by independent techniques, we might very well have to rewrite the laws of cosmology. 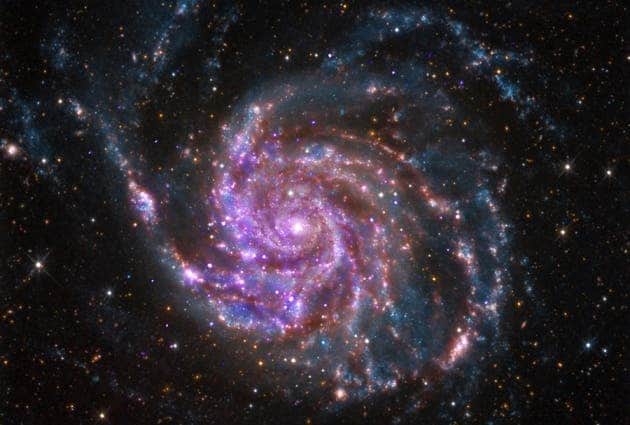 Data from galaxies such as M101, seen here, allow scientists to gauge the speed at which the universe is expanding.
Image credits X-ray: NASA/CXC/SAO; Optical: Detlef Hartmann; Infrared: NASA/JPL-Caltech

“I think that there is something in the standard cosmological model that we don’t understand,” says astrophysicist Adam Riess, a physicist at Johns Hopkins University in Baltimore, Maryland, who co-discovered dark energy in 1998 and led the latest study.

This discrepancy might even mean that dark energy — thought to be responsible for observed acceleration in the expansion of the Universe — has steadily been gaining in strength since the dawn of time. Should the results be confirmed, they have the potential of “becoming transformational in cosmology” said Kevork Abazajian, cosmologist at the University of California, Irvine.

In our current cosmological model, the Universe is the product of a tug of war of sorts between dark matter and dark energy. Dark matter uses its gravitational pull to slow down expansion, while dark energy is pushing everything apart, making it accelerate. Riess and others suggest that dark energy’s strength has been constant throughout the history of the Universe.

Most of what we know about dark matter-dark energy interaction and how each of them affects the Universe comes from studying remanent Big Bang radiation, known as the cosmic microwave background. The most exhaustive study on this subject was done by the European Space Agency’s Planck observatory. Those measurements essentially give researchers a picture of the Universe when it was really young — 400.000 years of age. Based on them, they can determine how the Universe evolved up to now, including the rate of expansion at any point in its history. Knowing where it was and where it is now, they can also predict those two parameters in the future.

But here’s the thing: they don’t add up to the observed rate of expansion. These predictions are invalidated by direct measurements of the current rate of cosmic expansion — also known as the Hubble constant. This constant is calculated by observing how rapidly nearby galaxies move away from the Milky Way using stars of known intrinsic brightness called ‘standard candles’. Until now the errors were small enough that the disagreement could be ignored, but Riess and his team warn that the discrepancy is too great to ignore any longer.

“We’ve been going gangbusters with this,” says Riess.

They managed to measure constant with an uncertainty of 2.4%, down from a previous best result of 3.3%. Based on this value, they found that the actual rate of expansion is about 8% faster than what the Planck data predicts, Riess reports.

If both the new Hubble constant and the earlier Planck team measurements are accurate, then there’s a problem with our current model. Either we misunderstood dark energy, or we got it right but it just got stronger as time progressed. Planck researcher François Bouchet of the Institute of Astrophysics in Paris says he doubts that the problem is in his team’s measurement, but that the new findings are “exciting” regardless of what the solution turns out to be.

However, when working on such (forgive the pun) astronomical scales, a lot of things can go wrong. One last possibility is that standard candles aren’t that reliable when it comes to precision measurements, says Wendy Freedman, astronomer at the University of Chicago in Illinois. In 2001 she led the first precision measurement of the Hubble constant. She and her team are working on an alternative method based on a different class of stars. We’ll just have to wait and see.

The full paper, titled “A 2.4% Determination of the Local Value of the Hubble Constant” has been published on the arXiv online repository on and can be read here.