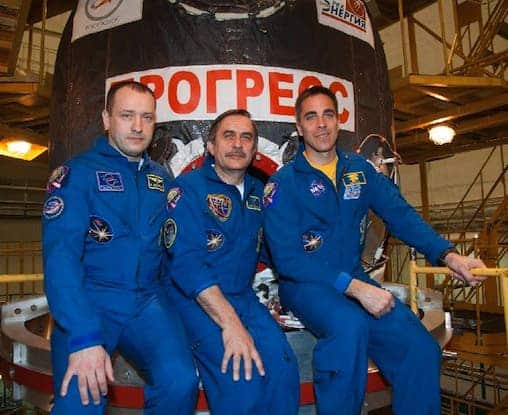 This afternoon a Soyuz spacecraft carrying three astronauts (two Russian and one American) is set for launch out of the Baikonur Cosmodrome in Kazakhstan, destined for the International Space Station, at 4:43 p.m. The flight is set to be a historical one, as it will set a new milestone in space launches. Typically, all manned flights up until now, be them through the now retired space shuttle or the presently tasked Soyuz, had taken at least two days to dock with the ISS. Today’s flight is set to dock with the space station in a mere six hours after launch.

Following three test flights with unpiloted Russian cargo spacecrafts, the astronaut team, comprised of NASA astronaut Chris Cassidy, along with Pavel Vinogradov and Alexander Misurkin of the Russian Federal Space Agency, will use the new ultra-fast docking technique riding in the Soyuz orbiter. For the past 13 years since manned crews have been ferried in and out of the ISS, such procedures took at least two days to perform. The accelerated schedule, however, means that today the astronauts will reach the space station in only four orbits of Earth.

“The four-orbit rendezvous has the advantage of a very short period of time from launch to docking,” Mike Suffredini, NASA’s International Space Station program manager, said of the mission. “It reduces the amount of time the crew has to spend in a small environment before they get to ISS.”

The astronauts will be joining commander Chris Hadfield and Flight Engineers Tom Marshburn and Roman Romanenko, who already are living on the station, and will be on space station for the duration of six months. During this time, they’ll be performing scientific experiments, space station upkeep, oversee robotic and unmanned courier and delivery services, and possibly the American crew, will conduct six spacewalks during their mission for space station maintenance.

“It’s a very fun and very interesting activity for us,” Misurkin said of spacewalking. “During these tasks we are doing to install some scientific equipment outside of the station, and also we are going to prepare some special stuff for the Russian module which will come a little bit later.”

You can check out the launch live via the NASA’s stream embedded right below.

UPDATE: The six-hour trip lasted roughly as long as an airplane flight from Seattle to Miami. It wasn’t without its nail-biting moments though (when is a space launch ever without any issues?), since at one point while approaching docking with the ISS, the Soyuz’s flight commander was a bit tenser than usual. “Hey, is anyone home?” Vinogradov joked. The new arrivals received a round of hugs and congratulations, exchanged warm words with loved ones back on Earth via the station’s communication link, and finally settled down for rest at the end of a long, long day. 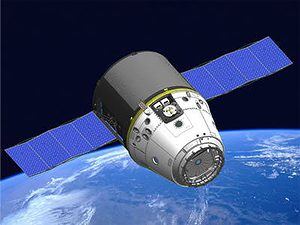 Since NASA retired its space shuttle program this summer, the space agency has been left with no viable means of transporting astronauts to and from the International Space Station. As such, NASA is currently dependent on Russia’s Soyuz spacecraft to fulfill this duty, whose services come at a hefty cost. Today, NASA announced that the American space transport company SpaceX will embark on a trip to the ISS in February, 2012.

The cost of a Soyuz trip for the US government comes at a very high cost, expected to climb at 63$ million per seat by 2015. As such, if this trend is set to continue, NASA could pay as much as $450 million in 2016 to Russia for the current number of fares to the ISS it currently has.

It’s evident that this move was expect from behalf of NASA from some time, since not only will SpaceX flights be slightly cheaper, but will also return to the American economy.

“SpaceX is excited to be the first commercial company in history to berth with the International Space Station,” said Gwynne Shotwell, SpaceX president. “This mission will mark a historic milestone in the future of spaceflight.”

Still, astronauts cannot be ferried to the ISS just yet. The first SpaceX flight to the ISS will be unmanned, as the February 7, 2012 launch is set to carry some important cargo to the station on its Dragon spacecraft. Manned flights will certainly follow.

“SpaceX has made incredible progress over the last several months preparing Dragon for its mission to the space station,” said William Gerstenmaier of NASA. “We look forward to a successful mission, which will open up a new era in commercial cargo delivery for this international orbiting laboratory.” 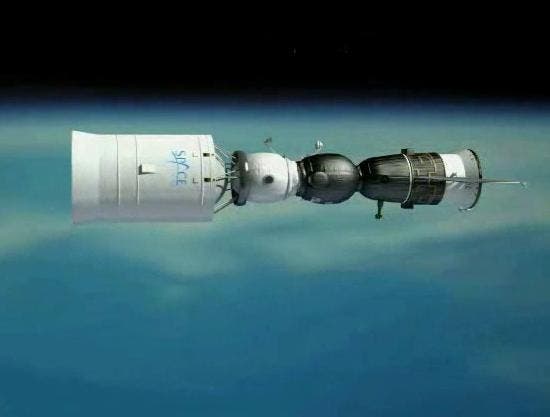 A propulsion and habitation module at left, linked up with a Soyuz spacecraft at right to create a complex designed for flying around the moon and back to Earth. Artist impression (c) Space Adventures

Like i reckoned in some of my past articles, space tourism is getting more and more popular each year, as more aeronautical companies begin to see the high potential of catering for millionaires’ orbital ambitions. One of the most sought after and ambitious space taxi projects is the highly publicized civilian lunar trip, in the works for a number of years now and scheduled to launch in 2015.

The company handling the trip is Virginia-based Space Adventures, which announced yesterday it will add another seat to a Soyuz spacecraft that will take space tourists round the moon, amounting to a total of two seats. The first has been already been taken, while the second one is still vacant. The announcement came as part of a ceremonial procedure celebrating the 10th anniversary of the first tourist flight to the International Space Station, as well as the 50th anniversary of NASA’s first manned spaceflight.

“Space Adventures will once again grace the pages of aerospace history, when the first private circumlunar mission launches. We have sold one of the two seats for this flight and anticipate that the launch will occur in 2015,” Richard Garriott, vice chairman of Space Adventures, said in a statement. “Having flown on the Soyuz, I can attest to how comfortable the spacecraft is, but the addition of the second habitation module will only make the flight that more enjoyable.”

The trip involves a launch inside the Russian Soyuz spacecraft, a 10-day stay on the International Space Station, and a 3.5-day trip to slingshot around the moon and a 3.5-day return to Earth. Eric Anderson, the Virginia-based company’s chairman, said he hopes the second seat will be sold by the end of the year, that would fill out the mission’s crew, which would be headed by a professional astronaut flying in the Soyuz’s third seat.

So far, Space Adventures has flown seven spaceflight participants on eight missions to the ISS, and estimates that by 2020, about 140 people will have been launched into orbital space from various civilian fields, like private individuals, corporate, university and non-profit researchers, lottery winners, or journalists.

“The next 10 years will be critical for the commercial spaceflight industry with new vehicles and destinations coming online,” said Eric Anderson, Space Adventures chairman. “But, in order to truly develop the industry and extend the reach of humanity over the course of time, there will need to be breakthrough discoveries made and innovative propulsion systems designed that will bring the solar system into our economic sphere of influence.”

I agree with Anderson, space tourism as it is today is highly exclusive, hard to develop and extremely resource demanding to enterprise, but it’s growing – a lot.

Initially, back in 2005 when the project was initially announced, the price tag for a set was $100 million but since then due to currency changes, inflation and of course the Russian inflated cut have amounted to nearly $150 million. Currently, the Russian Soyuz is the only orbital passenger spaceship, which grants Russia the monopole.

In addition to the Soyuz, a Block-DM upper stage and an extra habitation module would be launched into orbit. After the Soyuz finishes up its zero-G familiarization visit to the International Space Station, it would dock with the other modules, forming a complex capable of taking on the seven-day circumlunar odyssey. “You can think of it in many ways as your miniature space station that you take along with you,” said Richard Garriott.

Although Anderson generally refuses to identify future orbital spacefliers, he made an exception today: “There’s at least one person who will plan on flying into orbit in the next decade, and that’s me,” he said.

Well, does anybody have $150 million lying around? I’d advise you give it up for the chance of becoming the first human being to see the Moon up close in nearly 45 years.