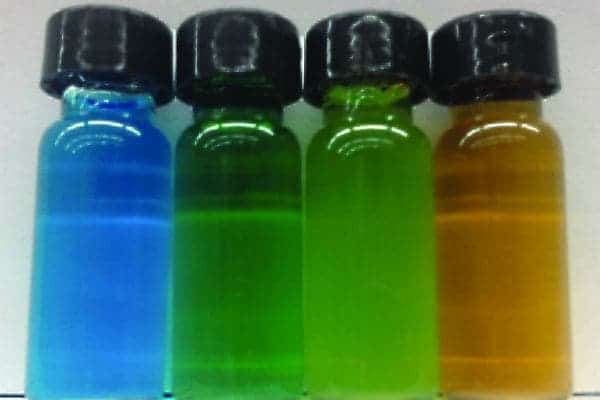 Patients would drink the ‘nanojuice’ like water. The liquid allows for easier and better quality imaging of the small intestine. Most importantly, a real-time video imaging can be achieved, greatly improving diagnosis conditions. Photo: : Jonathan Lovell

By virtue of its clogginess, the human gut, particularly the small intestine, is difficult to examine and diagnose for potential diseases or afflictions. Irritable bowel syndrome, coeliac disease and Crohn’s disease are just a few of the most common diseases that affect the small intestine and can lead to severe complications. In fact, some 35,000 deaths occurred in 2010 as a result of inflammatory bowel disease.

University at Buffalo in the US have developed what they call a ‘nanojuice’ that can effectively image the small intestine and its surroundings in real time, something that wasn’t possible until now.

Typically, when you have your bowls thoroughly examined by a physician, you’ll be asked to drink a thick (somewhat disgusting) liquid called barium. A combination of X-rays, ultrasound imaging and magnetic resonance then work together to paint of picture of what’s going in inside. The results aren’t that great though. For one, the quality of the image itself isn’t quite the best, hindering accurate diagnosis. It’s not all that safe either. Worst of all, however, you can’t image the small intestine in real-time using this technique, so you can’t see muscle contract and so on – the kind of information doctors often have to fill out by imagining.

The nanojuice is filled with nanoparticles designed to bind to the inner walls of the small intestine. Once it’s ingested (there’s no word of how fowl or pleasant the concoction is), the juice reacts with the light fired by a harmless laser into the patient’s bowls. Dye molecules called naphthalocyanines, packed inside the juice in special nanoparticles called ‘nanonaps’, absorb the infrared light from the laser. A computer processes the images and offers a clear, non-invasive and real-time look into the working organ.

“Conventional imaging methods show the organ and blockages, but this method allows you to see how the small intestine operates in real time,” said one of the team, Jonathan Lovell, assistant professor of biomedical engineering, in a press release. “Better imaging will improve our understanding of these diseases and allow doctors to more effectively care for people suffering from them.”

The team reports its work in the journal Nanotechnology.

Have you been suffering from multiple symptoms that have disrupted your life and your doctor has diagnosed you with Crohn’s disease? While there is no cure, there are treatments that will help with the symptoms and may put your condition into remission. This is great for the short-term but what if the disease is severe enough to take over your life and prevent you from working? Do you have the five symptoms of Crohn’s disease that will keep you from working? If so, you may be eligible for Social Security disability insurance. Take a moment to assess your condition and after you do, you may want to consider contacting a disability attorney.

Because Crohn’s is a chronic condition, symptoms will fluctuate in severity and frequency. The five symptoms that can prevent you from working because they are most likely to keep you confined are:

• Pain in the abdomen

Since Crohn’s disease inflames the digestive system, pain is usually centered in the abdominal area of the body. The disease causes ulcers throughout the entire system beginning with the mouth. In the more severe case, the ulcerations scar the walls of the intestines and can become obstructions to the bowel. These structures are known to create tunnels that connect the bowel to organs outside the digestive tract and cause infection.

Diarrhea is one of the more problematic issues with this disease. Even minor bouts with diarrhea prevent people from conducting their normal activities. Crohn’s disease magnifies this problem many times. For example, in severe cases of Crohn’s disease, individuals may have bowel movements 20 times a day. Their sleep is disrupted by the need to go to the bathroom.

Bloody stool is a problem for Crohn’s sufferers for obvious reasons. Continuous bleeding in the intestines may cause nausea and weakness. It is another reason why individuals with the disease are periodically confined to their homes.

Vomiting is most frequently a symptom of Gastroduodenal Crohn’s—one of the five types of Crohn’s disease: This form of Crohn’s is centered in the stomach and upper section of the small intestine. People with this kind of Crohn’s experience nausea, along with appetite loss and weight loss. If the bowel is obstructed they will have frequent vomiting.

Loss of Appetite and Weakness

Loss of appetite and weight are related to the weakness felt by Crohn’s patients. Loss of weight and the inability to eat combine with the disease’s other causes of weakness, and prevent patients from doing their regular activities.

Once you have determined that your Crohn’s symptoms are severe enough to prevent you from working, you may want to contact a disability attorney like the one found here. Before your appointment, take time to assemble everything you can that is related to your condition, such as frequency and length of your attacks, kind of medications and treatment. Also note items such as progress you have made and the setbacks to your condition you have suffered. With such information, the disability attorney that you consult will be able to advise you about the possibility of receiving disability insurance.

Drug delivery encapsulated in tiny nanoparticles are thoroughly studied with great interest because they offer the chance to deliver treatments more efficiently. That’s not all though – with nanoparticle pills you can selectively target key areas and deliver drugs which otherwise wouldn’t be possible without using invasive methods. Take diabetes  for instance – patients need to take shots of insulin on a regular basis and this is the only way the drug can be delivered effectively so far. A team of researchers at MIT have demonstrated, however, insulin absorption in the bloodstream of mice through nanoparticle pill oral ingestion. The findings could pave the way for other kinds of drugs becoming orally ingestistable, which are currently delivered only through invasive methods, like those targeting cancer.

“If you were a patient and you had a choice, there’s just no question: Patients would always prefer drugs they can take orally,” says Robert Langer, the David H. Koch Institute Professor at MIT, a member of MIT’s Koch Institute for Integrative Cancer Research, and an author of the Science Translational Medicine paper.

Of course, this is not the first research we’ve reported that discusses oral nanoparticle delivery. The key finding from MIT lies in the way the drugs bind to the intestinal inner wall. Previously, it was shown that when feeding on their mother’s milk, babies absorb antibodies contained in the milk to boost their own immune defense. These antibodies are absorbed through  cell surface receptor called the FcR, which allows them to enter the blood stream.

The nano-pills of the future

Exploiting this biophysical processes, the researchers coated their nanoparticles containing the drug payload (insulin) with Fc proteins which attach themselves to the FcR receptors. Once attached to the receptors, the particles bring along the bio-compatible nanoparticles along with them.

After administering the nanoparticles oral to mice, the researchers measured 11-fold efficiency of insulin absorption in the bloodstream than nanoparticles devoid of the Fc protein coating.

“It illustrates a very general concept where we can use these receptors to traffic nanoparticles that could contain pretty much anything. Any molecule that has difficulty crossing the barrier could be loaded in the nanoparticle and trafficked across,” says  Rohit Karnik, an MIT associate professor of mechanical engineering.

That’s very interesting, but it gets even more promising when you consider nanoparticle drug delivery can be used for treating all kinds of diseases that currently rely on invasive operations; i.e. cancer. The are numerous challenges to orally ingested nanoparticles though. Like a biological wall, the intestinal lining typically keeps drugs from reaching tumors via the blood stream.

“The key challenge is how to make a nanoparticle get through this barrier of cells. Whenever cells want to form a barrier, they make these attachments from cell to cell, analogous to a brick wall where the bricks are the cells and the mortar is the attachments, and nothing can penetrate that wall,” said  Omid Farokhzad, director of the Laboratory of Nanomedicine and Biomaterials at BWH.

The present research illustrates that intestinal cells can be breached, proving oral nanoparticle delivery can be attained. Further animal tests and experiments using other types of drugs are planned.