“Swimmer’s shoulder’ is an umbrella term used to describe shoulder injuries suffered by both the swimming and general population. According to a new study, as many as three-quarters of competitive swimmers suffer from the painful overuse injury.

The shoulder is particularly vulnerable to injury due to its structure and complex biomechanics. The shoulder joint is made up of three important bones: the scapula (shoulder blade), clavicle (collar bone), and humerus (arm). There is a very small surface area where the bones articulate with each other, which means it is an inherently unstable joint.

Some swimmers might notice pain in the back of the shoulder after 25-30 minutes of swimming, while others may experience a sharper pinching feeling in the top of the shoulder at the same point in every stroke cycle. Similar symptoms might be incurred following an intense shoulder workout at the gym.

When we perform a swimming stroke, the shoulder experiences a great deal of strain. Amateur swimmers typically have not much to worry since they don’t have to swim large over large distances on a daily basis like competitive swimmers.

Elite swimmers generally perform around 2,500 shoulder revolutions per day during their training sessions. The study found a strong association between distances swum and the incidence of shoulder pain. Those who reported no shoulder pain swam 1,568-3,513 yards (1,433-3,212 meters), whereas swimmers who experienced pain in their shoulder swam a median distance between 2,001-6,322 yards (1,829-5,780) per practice.

“Shoulder pain is significantly associated with median swimming distance but not with stroke type or specialized practice drills. To best tailor injury prevention programs for adolescent swimmers, programs must consider overall distance swum across strokes and drills rather than in specific scenarios alone,” the authors found.

Overtraining is also fostered by a “No pain, no gain!” culture. The study found that 66% of the surveyed competitive swimmers agreed with “mild shoulder pain should be tolerated” if they want to become successful swimmers and 61% that “taking time off from swimming is not ideal.”

“This research showed that pain was normalized for both high school and club swimmers,” Cahan said in a press release. “Additionally, we found that nearly half of the athletes in our study know peers who use medication to address swim-related injuries, so we worry about the exposure to medications especially in the context of the opioid epidemic.”

“Both hold practices with similar frequency, but club practices are significantly longer in duration and length, the authors wrote in their study.

Lacking a tongue, bamboo sharks (Chiloscyllium plagiosum) swallow with their shoulder bones. Other tongue-less sharks and fish species likely use a similar method of swallowing. 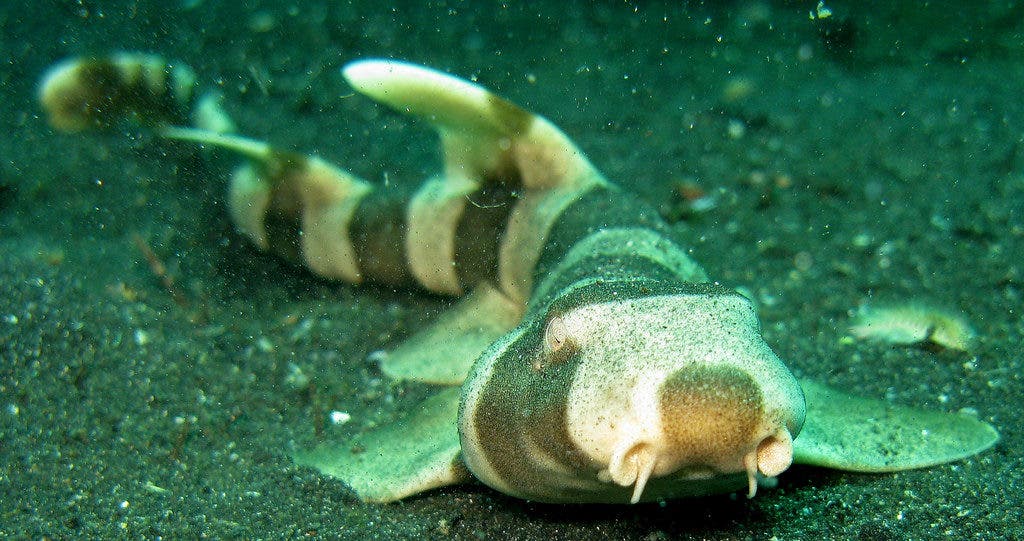 The finding comes from the lab of Ariel Camp, a postdoctoral researcher at Brown University’s Department of Ecology and Evolutionary Biology. Using state of the art X-ray imaging technology, Camp and her team filmed the internal going-ons of bamboo sharks having lunch. These tongueless critters, it seems, rely on their shoulder-blades to create suction when it’s time to swallow.

“They have this long pharynx, and they have to keep food moving down it,” Camp explains.

“We think this is part of a ‘hydrodynamic tongue.’ Sharks and fishes that don’t have a tongue control the motion of fluid within their mouths to manipulate food.”

Put your back into it!

Bamboo sharks’ “shoulder girdle” is made up of a U-shaped assortment of cartilage and muscles which they both for swallowing and control of their front fins, the paper explains. They’re one among several oceanic species that use a suction system to feed. It comes in handy when prying uncooperative pray, for example fish hidden in rocky crevices or dug into the ocean floor. By placing their mouth over the hiding spots, then rapidly opening it — sometimes with help from muscles deeper into their bodies — they create the suction needed to reel a meal in.

While the bamboo sharks’ suction system was documented in literature, whether or not their shoulder girdles played apart was a matter of some debate. The structure serves to support the sharks‘ frontal fins, which they use in a sort-of walking motion to position themselves over prey. As it’s not directly connected to the jaws or any other part of the head, however, it was assumed to remain still and play no part in the feeding process.

But through a method known as X-ray Reconstruction of Moving Morphology (XROMM), which combines skeletal CT scans with high-speed, high-fidelity X-ray “movies” observing tiny implanted markers, Camp’s team was able to create very detailed visualizations of how the sharks’ bones and muscles move while feeding. They fed three sharks pieces of squid and herring, then used XROMM imaging to get a better understanding of how they swallow.

They observed a surprising swing of the shoulder girdle in all three sharks: after closing their mouths, the cartilage quickly rotated backwards from the head by about 11 degrees. While the study only used bamboo sharks, Camp says other suction-feeding sharks probably swing their shoulders in a similar fashion.

Understanding how the sharks’ girdle functions could help explain why and how it evolved in the first place, for them and other species as well. Ultimately, as the structure enables such animals to “walk” around on the seabed, the research could uncover part of the story of how animals eventually made it from the ocean to dry land.

“The girdle shows up [in the fossil record], around the time that jaws evolved,” Camp said.

“We aren’t sure exactly what structures it evolved from or how that happened. Part of understanding that history is understanding what were the functions this structure had to carry out.”

The paper “Dual function of the pectoral girdle for feeding and locomotion in white-spotted bamboo sharks” has been published in the journal Proceedings of the Royal Society B.

A new study shows that evolution’s burden is distinctly visible on our shoulders – literally. Our shoulders are surprisingly similar to those of orangutans, as opposed to those of our closest relatives, chimps. This allowed us to be better throwers but also made us more prone to injuries. 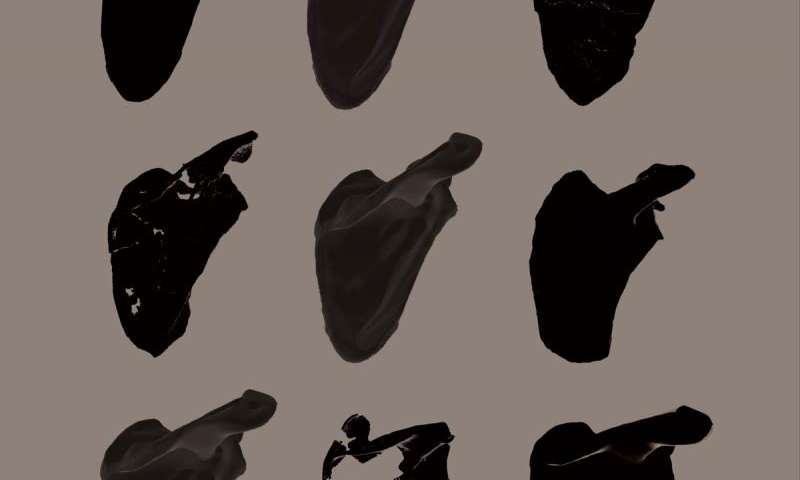 Humans started splitting from other species in the Pan genus some 6-7 million years ago. The genus Pan is part of the subfamily Homininae, to which humans also belong. In many ways, we are today similar to chimps. Classic research by Mary-Claire King in 1973 found 99% identical DNA between human beings and chimpanzees, although today that number is believed to be closer to 94%; in genetic terms, we are almost identical to chimps, and many similarities are easy to see. However, when it comes to shoulders, we’re more like our distant cousins the orangutans: less suited for climbing and better at handling tools and throwing things.

“Humans are unique in many ways. We have features that clearly link us with African apes, but we also have features that appear more primitive, leading to uncertainty about what our common ancestor looked like,” said Nathan Young, PhD, assistant professor at UC San Francisco School of Medicine and lead author of the study. “Our study suggests that the simplest explanation, that the ancestor looked a lot like a chimp or gorilla, is the right one, at least in the shoulder.”

Human shoulder blades are built for labor and not climbing, but 3D scans of shoulder blades from humans, early-human ancestors, apes, and monkeys alike seem to indicate that all of them are similar enough to suggest that we evolved from an ape model. According to researchers, it took quite a while for us to adapt from a tree-based life to moving on the ground and using tools, but we did adapt, and so did our shoulders (in time).

“These changes in the shoulder, which were probably initially driven by the use of tools well back into human evolution, also made us great throwers,” study author Neil T. Roach, a fellow of human evolutionary biology at Harvard University, said in a statement. “Our unique throwing ability likely helped our ancestors hunt and protect themselves, turning our species into the most dominant predators on earth.”

The study started with the class “That’s odd…” statement. Researchers realized that the human shoulder is strange.

“Human shoulder blades are odd, separated from all the apes. Primitive in some ways, derived in other ways, and different from all of them,” Young said. “How did the human lineage evolve and where did the common ancestor to modern humans evolve a shoulder like ours?”

To figure this out, they studied two early human Australopithecus species, the primitive A. afarensis and younger A. sediba, as well as H. ergaster and Neandertals, to build up a sort of shoulder spectrum and see how everything fits.

“Finding fossil remains of the common ancestor would be ideal, however, when fossils are absent, employing such multifaceted techniques is the next best solution,” said Zeray Alemseged, PhD, senior curator of Anthropology at the California Academy of Sciences.

But even with the resources they had available, they were able to establish the relationship between the different shoulders.

The switch came with a bunch of trade-offs, both positive and negative. For starters, human shoulders are better at throwing things fast and precise, which certainly helped our ability to hunt. However, this also left us more prone to shoulder injuries, which is still visible today. Americans get approximately 2 million rotator cuff injuries each year. Actually, this research could help those suffering from this type of injuries:

“We could potentially use information about the shape of an individual’s shoulder to predict if they have a higher likelihood of injury and then recommend personalized exercise programs that would best help to prevent them,” Young said. “For a baseball pitcher, depending on your shoulder shape, you might want to emphasize some strengthening exercises over others to protect your rotator cuff.”