Helping others is a key feature of human behavior but it’s not necessarily something exclusive to humans, according to a new study. Researchers found birds care about the fate of conspecific birds, noticing how much food others have and sharing theirs with individuals that are going hungry.

Food-sharing observed among humans in daily-life events such as dinner parties, and there is evidence that this was present even in pre-historic humans. But food-sharing is also relatively common in the wild, especially between individuals and their offspring.

“My earlier research has shown that birds also sometimes do something for someone else,” said Jorg Massen, lead-author, in a statement. “The question was, however, whether this is an instinctive behavior that is ingrained, or whether this behavior is flexible, and whether these birds might also take into account how great the need of the other animal is.”

To investigate sociality in birds, Massen worked with Azure-winged magpies in an experiment. He gave one bird an abundance of mealworms, a popular delicacy for these birds, while the rest had limited access or were given nothing at all. The magpie had the chance to share the mealworms through a wire mesh.

The researchers found out that the birds were inclined to share food with their peers. They differentiate, however, between others that have or do not have food, and subsequently cater to that lack. Females shared with the ones that had nothing, while males always shared, likely as a way to showcase themselves as generous.

The magpies were more inclined to share food as a response to begging but would share with those less fortunate even if they weren’t asked. This shows that they might truly notice the need of others, even without specific behavior from other birds. They may even show sympathy, according to Massen.

The study shows that magpies can exhibit prosocial behavior just like people, and that they may well have the same motivation as we do to engage in such behavior. This might indicate that they can empathize with the situation in which their peers find themselves and act accordingly. Still, further work is needed to tell if this is the case.

At the same time, the research also confirmed what scientists previously found in other animal species: cooperative breeders that raise their young together have a strong tendency to help each other.

“Because we let our children grow up in groups, we have become prosocial and can work well together. We now also see this in the azure-winged magpies,” said Massen.

The study was published in the journal Scientific Reports. 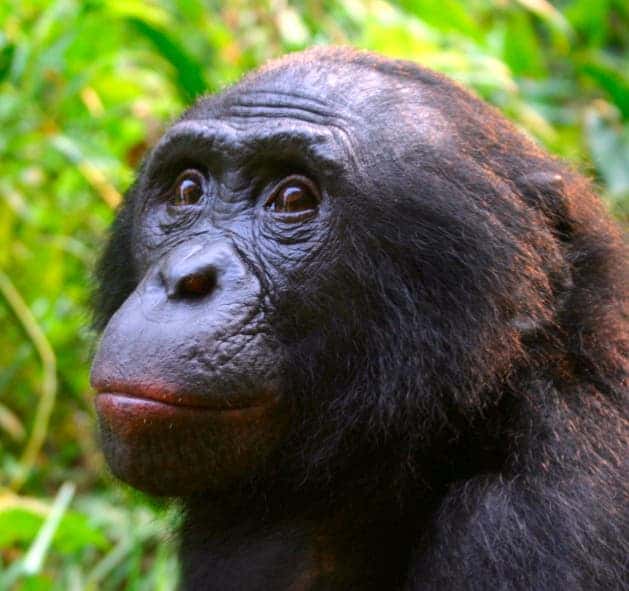 Cooperation is the bedrock of human social behavior and arguably the main reason why our species has come to dominate this planet. It’s through forming very tight-knit communities and sharing — not just of resources but knowledge, too — that humans have managed to overcome their individual weaknesses and vulnerabilities. But where did this striking behavior originate? Evolutionary clues may lie in our closest relatives, the bonobos, which seem to be eager to share food with peers even when they could have easily kept it for themselves. Tool-sharing, however, is not part of their generosity repertoire.

What makes a generous ape?

To the untrained eye, bonobos and chimps are hard to tell apart. However, the two differ in morphology, behavior, and perhaps even emotions and cognition in important ways.

Bonobos live in female-dominant social groups where the females form tight bonds against males through same-sex socio-sexual contact, an approach that some scientists believe is what limits aggression. Sex plays a vital role in bonobo society — the animals do not form permanent partnerships and making love is used both as a greeting and to resolve conflicts. The typical bonobo has red lips, neat little ears, and a distinctive hairdo. In the wild, they have not been seen to cooperatively hunt, use tools, and aggression is quite uncommon (the completely peaceful, hippie bonobo is a myth).

Chimps live in male-dominant groups, where intense — sometimes lethal — aggression is common. Chimps are so aggressive and competitive that they will even eat the infants of other chimpanzee groups. Unlike bonobos, chimps hunt in groups and use tools. Studies have shown that chimps also exhibit some features of generosity. In one experiment, chimps handed over a tool that was out of reach to another chimp and who was clearly requiring it.

But what about bonobos?

Christopher Krupenye, a primate behavior researcher at the University of St. Andrews in Scotland, repeated the experiment with bonobos that live in the Lola Ya Bonobo sanctuary in the Democratic Republic of Congo. Two individuals were placed in cages side by side with a narrow window in between. One individual had several palm nuts while the other individual had several rocks at his disposal — that are perfect for cracking palm nuts.

The bonobos showed very little intent in sharing the rocks but consistently shared the nuts (18% of the trials) even though they could have kept them for themselves with no repercussions. Because there was no pressure to share their nuts, the bonobos seem to have behaved this way out of generosity.

In the wild, chimps also sometimes share food, but only on certain occasions such as following a big hunt or to placate pestering beggars.

In most species, food sharing happens between parent and infant. But, when it comes to food, the findings show that bonobos are uniquely prosocial among non-human primates.

It’s not clear why the bonobos wouldn’t share tools. What’s truly striking is that the behavior is almost completely opposite of chimps, who would share tools but not food.

Perhaps the separate evolutionary paths that bonobos and chimps each took may have shaped their unique takes on generosity. Alternatively, since bonobos don’t really use tools, they may fail to grasp the tool’s utility to the other person. Bonobos, who live in forests where food is abundant, have never been observed to crack nuts with a rock or fish termites with a stick as chimps often do.

But although their generosity isn’t fully rounded, the study suggests that bonobos share many traits with humans in this respect. Over millions of years, our lineage may have encouraged more sharing, leading to more versatile generosity. For instance, human children as young as five understand that generosity scores them social points among their group and are remarkably willing to do so (although some parents reading this article may beg to differ).

The findings appeared in the Proceedings of the Royal Society B.