In February, a study challenged the long-standing idea that the Milky Way is shaped like a flat disc. Instead, researchers found that our galaxy’s outer edge is warped and twisted. Now, a second study has new evidence to back up this claim. 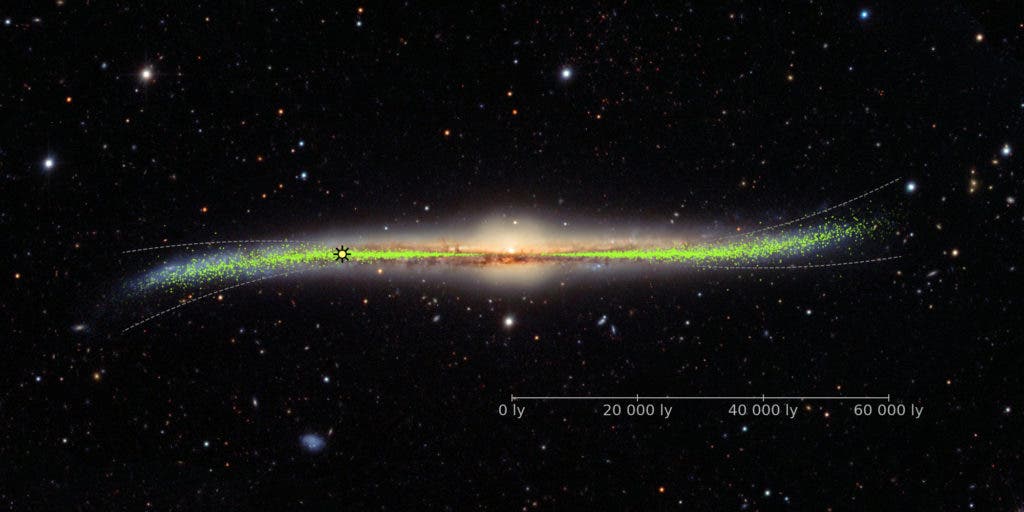 It’s quite difficult to determine the shape of a galactic structure you’re a part of. Imagine being a really clever cell part of the human body — you could determine the shape of outside creatures like cats, dogs, or other people, but the shape of your own body is much more difficult as you don’t have a good vantage point. Luckily, there are some tricks that scientists can use. Just like the original research that investigated the Milky Way’s shape, researchers at the University of Warsaw in Poland also employed Cepheid variable stars as markers to identify the edges of the galaxy.

Cepheids are hot and massive stars that have five to twenty times the mass of our sun and up to 100,000 times as bright. They pulsate radially for days to months at a time — and this period of pulsation can be combined with the Cepheid’s brightness to reliably establish its distance from the sun.

Because they are so bright, Cepheids can be clearly seen millions of light-years away and can be easily distinguished from other bright stars in their vicinity. This makes them indispensable tools in astronomers’ kit. For instance, it’s thanks to Cepheids that Edwin Hubble and Milton L. Humason were able to prove that the Universe is in a state of expansion.

In their new study, astronomers at the University of Warsaw determined the position of 2,431 Cepheids found throughout the Milky Way via the Optical Gravitational Lensing Experiment (OGLE), a project that tracks the brightness of billions of stellar objects. In addition to OGLE data, the authors also tapped into other variable star catalogues such as the General Catalogue of Variable Stars (GCVS), the All Sky Automated Survey (ASAS), the All-Sky Automated Survey for Supernovae (ASAS-SN), the Asteroid Terrestrial-Impact Last Alert System (ATLAS), and Gaia Data Release 2 (Gaia DR2).

All these thousands of Cepheids act like 3-D beacons, which allowed the researchers to reconstruct the precise shape of our galaxy — a spiral galaxy which is a little warped and twisted around the edges. What’s more, this warped edge contains many young stars, which is quite unusual.

“Our map shows the Milky Way disk is not flat. It is warped and twisted far away from the galactic center,” said co-author Przemek Mroz. “This is the first time we can use individual objects to show this in three dimensions,” some, he said, “as distant as the expected boundary of the Galactic disk.”

What caused this curvature is yet unknown although there are some possible explanations, including a near-collision with another galaxy and dark matter. More studies are needed to shed light on the issue.

Scientists have made a significant advancement in shaping DNA — they can now twist and turn the building blocks of life into just about any shape. In order to demonstrate their technique, they have shaped DNA into doughnuts, cubes, a teddy bear, and even the Mona Lisa. 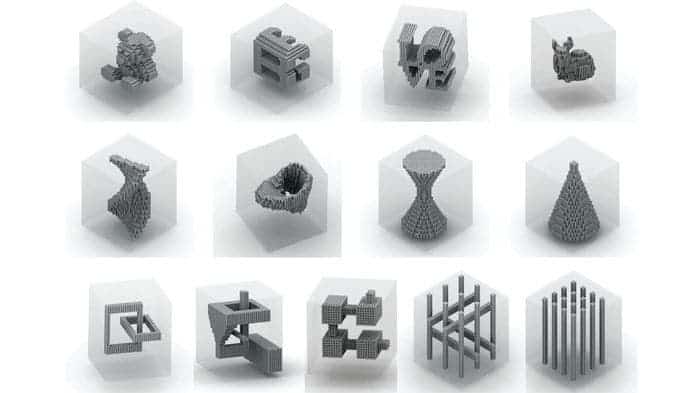 Scientists have long desired to make shapes out of DNA. The field of research emerged in the 1980s, but things really took off in 2006, with the advent of a technique called DNA origami. As the name implies, it involves transforming DNA into a multitude of shapes, similar to the traditional Japanese technique of origami. The process starts with a long strand placed on a scaffold with the desired sequence of nucleotides, dubbed A, C, G, and T. Then, patches of the scaffold are matched with complementary strands of DNA called staples, which latch on to their desired target. In 2012, a different technique emerged — one which didn’t use scaffolds or large strands of DNA, but rather small strands that fit together like LEGO pieces.

Both techniques became wildly popular with various research groups. Scientists started to coat DNA objects with plastics, metals, and other materials to make electronic devices, electronics, and even computer components. But there was always a limitation: the size of conventional DNA objects has been limited to about 100 nanometers. There was just no way to make them bigger without becoming floppier or unstable in the process. Well, not anymore. 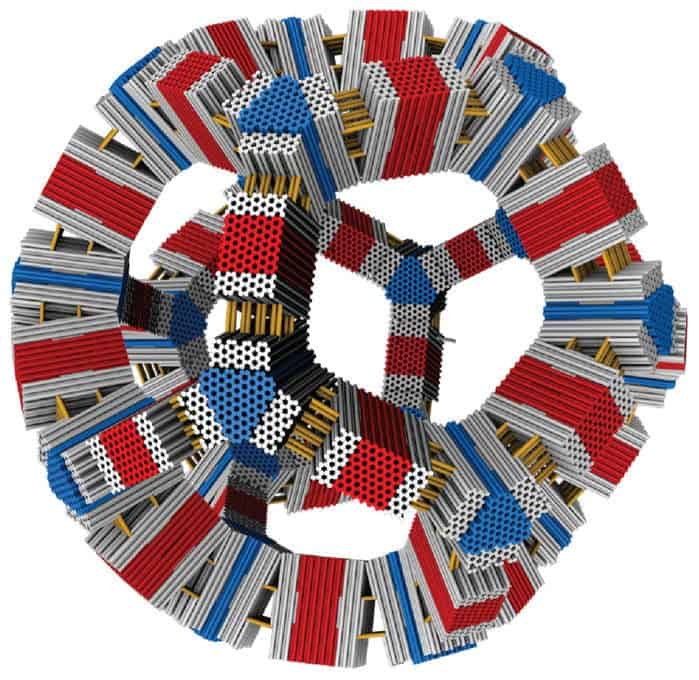 Groups in Germany, Massachusetts, and California all report that they’ve made dramatic breakthroughs in DNA origami, creating rigid modules with preprogrammed shapes that can assemble with other copies to build specific shapes — and they have a variety of shapes to prove it.

A German team, led by Hendrik Dietz, a biophysicist at the Technical University of Munich, created a miniature doughnut about 300 nanometers across. A Massachusetts team led by Peng Yin, a systems biologist at Harvard University’s Wyss Institute in Boston, created complex structures with both blocks and holes. With this technique, they developed cut-out shapes like an hourglass and a teddy bear. The third group led by Lulu Qian, a biochemist at the California Institute of Technology in Pasadena, developed origami-based pixels that appear in different shades when viewed through an atomic microscope. Taken together, these structures represent a new age for DNA origami.

Furthermore, it’s only a matter of time before things get even more complex. Yin’s group actually had to stop making more complex shape sbecause they ran out of money. Synthesizing the DNA comes at the exorbitant price of $100,000 per gram. However, Dietz and his collaborators believe they could dramatically lower the price by coaxing viruses to replicate the strands inside bacterial hosts.

“Now, there are so many ways to be creative with these tools,” Yin concludes.

Ever wondered if you can make ripples on jello but can’t get enough of the stuff to test it out? Maybe you want to study how waves behave but hate getting wet, or you’re a material scientists that just wants a bit more realism from his simulation software. Luckily for you, MIT seems to have the same problems and the new interface they designed can help you out with all of those applications, and more.

Materiable is a novel shape changing interface designed to not only offer shapes that let you physically manipulate data, but also recreate the material properties of any substance. The interface has a deceptively simple, Minecrafy look, being made up of colorless blocks that you can push down on. But it’s an incredibly versatile tool, as Materiable is able to replicate anything you can mathematically describe to the software: from water, honey or jelly to sponge or rubber. Colored light is projected onto these blocks in simulations, making the simple blocks seemingly come to life as they move.

Active learning is a lot more efficient than a one-sided lecture, and Materiable has a lot of potential in this field. The way it was designed means that the interface lends itself really well to translating mathematical models into physical shapes. It offers a very intuitive method of changing these models by alter the shapes in front of you. With the right software, it could allow you to directly alter the spectral content of audio, revolutionizing the way we make music.

But I think Materiable is going to catch on no matter how we employ it for a very simple reason: It’s wickedly cool.