We think of oceans as eternal and stable; what could affect these endless fields of water? But everything changes, the plains, mountains, and the Earth itself. Throughout our planet’s geological history, oceans have been born and destroyed, and now we’re one step closer towards knowing how this happened.

Millions of years ago, the Earth was a different place. It’s not just the biodiversity and the climate, the oceans and the land looked different, too. That happens because the surface of the Earth is in constant motion. It doesn’t move by much (on the scale of centimeters per year), but give it enough time, and the change becomes noticeable. This happens due to the relative motion of the planet’s tectonic plates, pushed around by upwelling magma from the mantle.

The movement isn’t only lateral — it’s vertical as well. New crust is formed at mid-oceanic ridges, such as the Mid-Atlantic Ridge, and older crust is destroyed. Some of the crust goes up, the other sinks into the mantle, in the “geological graveyard.” This cycle also affects oceans. Sometimes, it opens up or spreads new oceans, and other times it closes them down. The Pacific, for instance, is currently expanding, while the older Atlantic is slowly shrinking. Now, researchers have used seismic tomography to have a “look” at this geological graveyard up to 2,800 km beneath the surface, identifying how the planet might have looked like 200 million years in the past.

This is not the first time something like this has been done. Several studies, using several different approaches, have retraced our planet’s evolution, sometimes ending up with different models. Now, Grace Shephard at the University of Oslo has found a simple, yet powerful way to combine images from alternative seismic tomography models.

“There are many different ways of creating such models, and lots of different data input can be used,” explains Grace Shephard, who has been a postdoctoral researcher at CEED since she took her Ph.D. at the University of Sydney four years ago.

“We wanted a quick and simple way to see which features are common across all of the models. By comparing up to 14 different models, for instance, we can visualize where they agree and thus identify what we call the most robust anomalies.”

The Arctic is a region where little is known about plate tectonics far back in time. That is one of the reasons why Australian Grace E. Shephard decided to join the CEED team of the University of Oslo. Photo: Dag Inge Danielsen/UiO.

This tomography data gives more accurate and more easily available information about the movements of the oceans and continents, as well as the interaction between the Earth’s crust and the mantle. By seeing at what depth the former seafloor lies (the paleo-seafloor), and supposing that it sinks at a rate of 1 cm/year, researchers can calculate when the paleo-seafloor sank. Using this method, scientists found that there was a period around 100–140 million years ago that experienced more ocean destruction; it’s unclear why this happened. They also learned of an area of the mantle which is more ‘sticky’ — viscous — and exerts more opposition to sinking plates, resulting in a “traffic jam.”

The analysis raises new possibilities of understanding our planet’s history, but there’s still plenty of work to do. The models have to be constantly fine-tuned and improving using real-life observations.

“Studying these processes in new ways opens up new questions. That is something we welcome, because we need to find out what questions to ask and what to focus on in order to understand the development of the Earth. We always have to keep in mind what is an observation and what is a model. The models need to be tested against observations, to make way for new and improved models. It is an iterative procedure.”

Using the same approach, we can also derive information about the future. While it’s impossible to gauge how life will evolve over such a long timescale, geologically speaking, not that much will change.

“If you look at Earth from space, the distribution of continents and oceans will then look much the same, even though life, the climate and sea level may have dramatically changed. If we move even further ahead, say 10 or 100 million years, it is very hard to say how oceans may be opening and closing, but we have some clues. Some people think that the Atlantic will close, and others think the Arctic or Indian oceans will close. We can follow the rules of the past when we look to the future, but this task keeps geoscientists very busy.”

Beneath one of the most famous touristic attractions in the world, the Yellowstone National Park, there lies one of the largest and most complex volcanic systems in the world. Yellowstone is a supervolcano of perplexing size, but as Utah seismologists found… it may actually be even bigger than previously thought.

“For the first time, we have imaged the continuous volcanic plumbing system under Yellowstone,” said co-author Hsin-Hua Huang, a post-doctoral researcher in geology and geophysics at the University of Utah. “That includes the upper crustal magma chamber we have seen previously plus a lower crustal magma reservoir that has never been imaged before and that connects the upper chamber to the Yellowstone hotspot plume below.”

A supervolcano is technically defined as any volcano capable of producing a volcanic eruption with an ejecta volume greater than 1,000 km3 (240 cubic miles). Just so you can get an idea, a Yellowstone eruption which took place just over 2 million years ago ejected 2,500 cubic km, while the infamous Mount Helens 1980 eruption only spewed up 0.25 cubic km – 10,000 times less! Needless to say, should Yellowstone erupt, it would be an unprecedented disaster in the history of mankind – a gargantuan event with huge planetary consequences. Naturally, geologists and geophysicists want to understand it as best as possible.

For this reason, several studies have been undertaken, trying to estimate the extent of the caldera through different methods. Now, scientists from the University of Utah have used a technique called seismic tomography to take a better look at the Yellowstone caldera, and they’ve come up with surprising results: according to their calculations, the caldera is 4.4 times larger than previously thought.

The technique they used is not innovative, although it’s relatively new in the geophysical arsenal of study methods. Seismic tomography is an imaging technique that uses seismic waves generated by earthquakes or controlled explosions to create  computer-generated, three dimensional images of Earth’s interior. The time it takes  for a seismic wave to arrive at a seismic station from an earthquake can be used to calculate the speed along the wave’s ray path. By using arrival times of different seismic waves scientists are able to define slower or faster regions deep in the Earth. There are several material properties which define the wave speed, but under the right circumstances, seismic tomography can reveal deep underground structures – such as the Yellowstone caldera.

A very basic explanation of how seismic tomography works. Image via Northwestern University.

According to their results, the reservoir lies 12 to 28 miles (19 to 45 kilometers) beneath the Yellowstone supervolcano and is more than four times bigger than the magma chamber that is already known to exist. However, this doesn’t really means there’s an increased hazard associated with Yellowstone.

“The actual hazard is the same, but now we have a much better understanding of the complete crustal magma system,” says study co-author Robert B. Smith, a research and emeritus professor of geology and geophysics at the University of Utah.

Jamie Farrell, a co-author of the study published online today in the journal Science added:

“The magma chamber and reservoir are not getting any bigger than they have been, it’s just that we can see them better now using new techniques,” Farrell says.

For decades, the accepted theory was that the mountain chains running from Alaska to Mexico were created from fragments of land scraped off a huge tectonic plate moving eastwards, called the Farallon, that converged with North America and sunk below it over the past 200 million years or so. But alas, geologists and geophysicists aren’t always in accord, and a new seismologic study suggests that island arcs, like those in today’s western Pacific, may have piled atop one another, sinking and forming the verical buried slabs we see today. As north American moved to the west and Farallon moved to the east, it scraped off the tops of these slabs, raising mountains in the process. 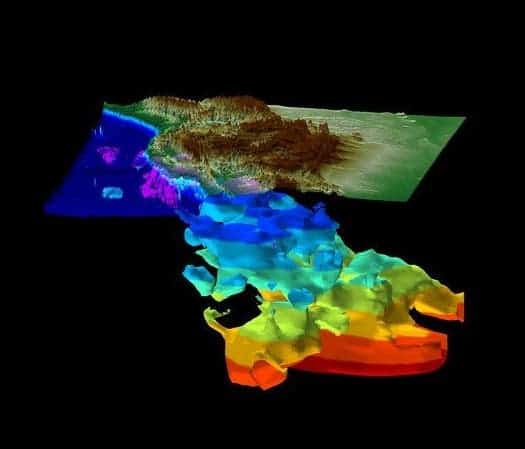 “This is an important, even momentous, paper,” says Eldridge Moores, a geologist at the University of California in Davis, who proposed a similar westward-diving crustal motion, or subduction, for western North America in 1970 (Moores, E. Nature 228, 837–842 (1970)). “I’m really glad to see it.”

The study was conducted by Karin Sigloch, a seismologist at Ludwig Maximilians University in Munich, Germany, and Mitchell Mihalynuk, a geologist at the British Columbia Geological Survey in Victoria, Canada. Using a method called seismog tomography, they created 3D images of the subducted slabs deep below the continent. Their conclusions, while certainly out of the box, make a lot of sense.

Judging from the images they created, the slabs now look like massive, nearly vertical walls extending from 800 to 2,000 kilometres below the surface of western North America. The first red flag was when they observed that the biggest of these slabs was not connected to the plate now subducting beneath the US Pacific Northwest. Geologists previously believed that the piece was a remnant of the Farallon, but the new data showed the biggest buried slab wasn’t connected to the Farallon at all.

But Sigloch and Mihalynuk took the results from their image and tried to reconstruct where the crustal pieces fit together.

“It was geometrically just not possible,” says Sigloch. “The more we saw, the less sense it made.”

Instead, they came up with a different theory. Island arcs to the west of North America began crashing into the continent, piling atop one another. As North America was pushed to the West, it overrode the islands, some of which piled up and some of which sank beneath the slabs. Finally, oceanic crust began subducting eastward under the continent, in the configuration we see today. 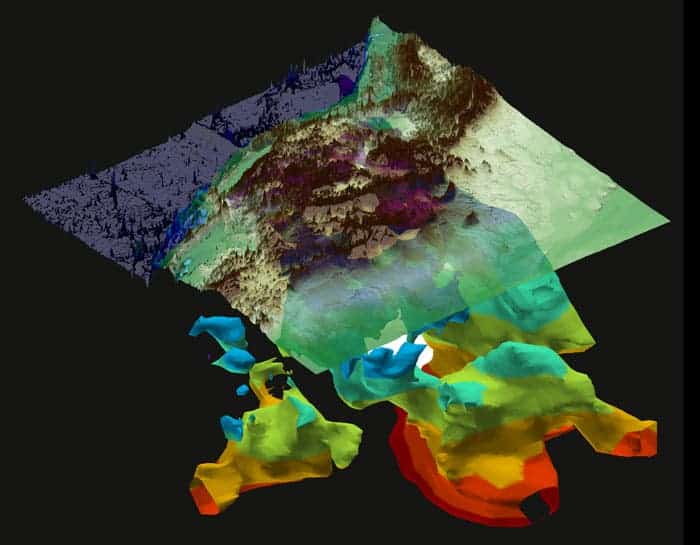 This also solves the longstanding question as to why the buried slabs are piled vertically rather than at an angle.

“A lot of things are just simpler now,” she says.