Imagine you’re a long-tailed Duck (Clangula hyemalis). You see a small, delicious fish in the water and you dive towards it, looking for a tasty meal. But just as you catch it in your beak, you hit a wall of near-invisible netting, meeting the same fate as the fish you’re trying to eat.

Far from being a hypothetical scenario, this is a danger that many seabirds face every day — because of something gillnets.

Gillnets are vertical sheets of netting held up by floating buoys that trap passing fish by the gills. They’re made of monofilament nylon that is practically invisible underwater. This material is widespread in fisheries around the world, and particularly popular among small-scale fishers because of its low cost.

Unfortunately, these nets pose a high risk of entanglement to many marine animals, including diving seabirds foraging nearby. To date, a universally effective solution has not been identified to mitigate bycatch in gillnet fisheries, despite an estimated 400,000 seabirds being by-caught in gillnet fisheries each year (and that’s a conservative estimate).

Studies suggest that technical measures, such as LED lights, can reduce seabird bycatch in gillnet fisheries. However, these studies only focused on a few species in specific geographical areas. The universal best practice to minimize bycatch is to spatially or temporally exclude gillnet fishing from specific areas or at specific times, but fishermen don’t really like that as they feel it could limit their yield.

It’s time for a new approach, then.

Researchers went back to the drawing board, asking simple questions: What do dive seabirds see? How do they forage? What do they avoid? With the help of animal behavioral ecologists and tracking data, they realized the answer could lie in preventing birds from coming near the gillnets at all.

A team of bird conservation researchers in the United Kingdom developed a floating buoy that displays large, obvious looming eyes and that can be seen from a long way off. As the buoy bobs in the water, the tall pole sways conspicuously, and the eyes rotate in the wind. They called it the Looming-eyes buoy (LEB), or simply “The Bobby.”

The looming eyes have been shown to trigger “collision neurons” in bird brains that prevent them from running into objects or each other, the researchers explained. They adapted the size and contrast of the cartoon eyes to be detectable by Canada geese (Branta canadensis), which have some of the worst eyesight of all seabirds.

Since last year, researchers have been working to test the effect of this new device on birds out at sea. They did trials in the Küdema Bay protected area, off the Estonian island of Saaremaa. The bay attracts large concentrations of wintering seabirds, including the Long-tailed Duck and Steller’s Eider (Polysticta stelleri).

The researchers counted birds for four hours a day, before and after placing the LEBs during the 62-day study period. The number of long-tailed ducks dropped by up to 25% within a 50-meter radius of each LEB. And the effect was long-lasting. Only after two or three weeks, the birds began to swim closer to the buoys.

“There have been many, many attempts to try to find a solution. Nothing seemed to work across different fisheries and species, so we wanted to try something different, and explore something that will work above the water, instead of underwater,” Yann Rouxel at the BirdLife International Marine Programme in the UK, told The Guardian.

It’s a simple and cheap solution that could realistically be deployed to reduce bird bycatch and save scores of them every year.

The findings of the LEB tests were published in a paper in the journal Royal Society of Open Science.

Back in 2015, an estimated one million seabirds died along the west coast of North America during a marine heatwave, leaving researchers with open questions over what happened. Now, they might have figured out what went wrong.

About 62.000 dead or dying common murres, a medium-sized seabird similar to a penguin, were found on the shore from California to Alaska – having died of starvation. Researchers estimated a death toll of one million, extrapolating from the number of birds that usually wash ashore.

This wasn’t the first time that murres were found dead, usually coinciding with extraordinary warmer temperatures, but the scope was shocking. Never before was such a massive die-off of seabirds recorded in history, according to the University of Washington, which partially funded the study published in PLOS One.

“The magnitude and scale of this failure have no precedent,” lead researcher John Piatt, a biologist with the U.S. Geological Survey, said in the statement. “It was astonishing and alarming, and a red-flag warning about the tremendous impact sustained ocean warming can have on the marine ecosystem.”

Researchers analyzed vast amounts of data, including surveys of birds from the government and rehabilitation centers, sea surface temperatures, and reports from fisheries. This helped to determine how the record heatwave led to the die-off of seabirds.

A mass of warm water, colloquially known as “the blob,” began forming in the Gulf of Alaska in 2013, the study noted. By April 2015 it was 1.300 miles wide and 328 feet deep, affecting the murres in several ways.

The warmer water of the ocean led to the fish eaten by the murres to go deeper to colder waters, altering their body conditions. At the same time, competition for food increased, as the appetite of species of predator fish that eat the same as murres increased.

“As the bottom of the ecosystem was shifting in not good ways, the top of the ecosystem was demanding a lot more food,” study co-author Julia Parrish told the LA Times. Those conditions led to “intense competition for absolutely not enough food, which is what killed them.”

Despite the die-off seen a few years back, murres are not facing extinction, researchers said. Nevertheless, it will take years for the populations affected to go back to their former numbers. The phenomenon experienced by the murres it’s anticipating what could come in a warmer world, they said.

This “demonstrates that a warmer ocean world is a very different environment and a very different coastal ecosystem for many marine species,” said Parrish in a statement. “Seabirds, as highly visible members of that system, are bellwethers of that change.”

Researchers studying the plastic problem our ocean is facing predict that by 2050 nearly every single maritime bird species will have plastic pieces inside their digestive systems. The grim prediction is based on a new study showing that about 90 percent of seabirds today have plastic in their bodies. 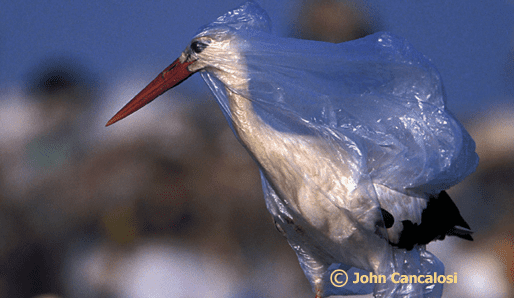 In the last few decades, the quantity of plastic ingested by seabirds has increased dramatically. In the 1980s, only about 10% of seabirds were found to have pieces of it in their guts. The increase is due to the incredible amount of plastic clogging up modern bodies of water – as many 360,000 pieces of plastic for every square mile in most of the world’s oceans.

“This really is an issue that concerns every single person, and their daily habits,” biologist Boris Worm of Dalhousie University, who authored an accompanying commentary on the new research, told Discovery News.

They surveyed data on 186 species of seabirds, incorporating information on plastic pollution in the birds’ habitats, foraging strategies, body size and more. This was used to create a model predicting debris exposure for the birds.

The researchers next compiled studies of actual plastic ingestion by birds, using reports dated from 1962 to 2012. The statistical model and the other data show that if the same studies were conducted today, “the ingestion rate would reach 90 percent of individuals,” Wilcox and colleagues wrote. Their findings were published in the Proceedings of the National Academy of Sciences.

“We predict plastics ingestion is increasing in seabirds, (and) will reach 99 percent of all species by 2050,” the authors wrote.

The model they used makes the researchers believe that seabirds located around the Tasman Sea, between Australia and New Zealand, are the ones in greatest danger of plastic ingestion. The high concentration of plastic debris in the area, along with a significant bird population – whole species relied on the region for breeding, foraging, and more for centuries now – explain the threat the area poses.

Worm added that much of the plastic in the ocean flows in from rivers, so the originating sources “could be way inland.”

And the pollutant is hazardous to the birds and other wildlife even when not ingested (leading to poisoning, blockage of the intestines and other nice and magical afflictions). Six-pack plastic holders, for example, have been found wrapped around bird’s necks, around turtle’s shells and other animals, suffocating them or leading to gruesome results. 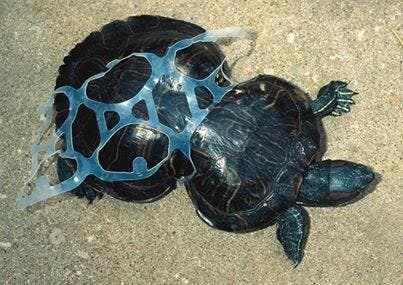 Turtle that grew with a six-pack holder around its body.
Image via Discovery

Reducing our reliance on plastics combined with more effective waste management could reduce ocean pollution and the associated health threats to seabirds and other species, according to the scientists. Worm said:

“The biggest single problem is the rapid economic growth and increased use of disposable plastics in many parts of the world, where the waste collection and management (such as safe storage and recycling) system has simply not grown at the same pace. That is, the waste is disposed anywhere, and not stored properly.”