Most of the carbon dioxide (CO2) associated with human activity is absorbed by the oceans, which act as a huge carbon sink. In doing so, the oceans help curb global warming by keeping greenhouse gases from trapping heat in the atmosphere but on the downside, CO2 and seawater react to form carbonic acid — which makes the water more acidic.

Among the many potential problems this causes to marine life, a new study found that the increasingly acidic oceans are making fish lose their sense of smell. 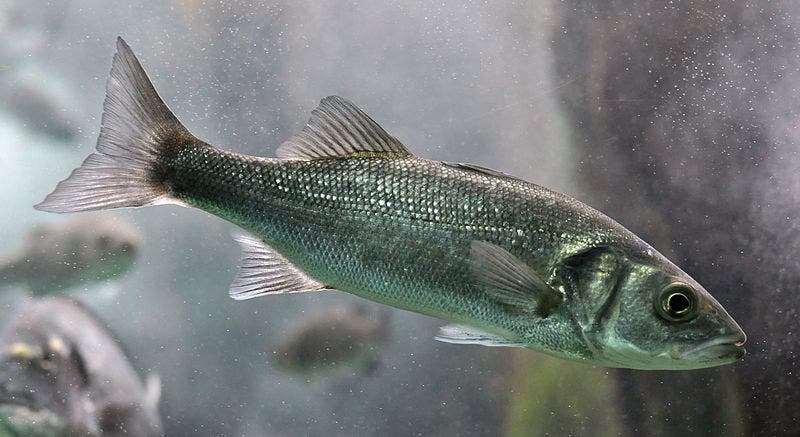 Olfaction is key in order for fish to find food and safe habitats, avoid predators, and to recognize each other. Dr. Cosima Porteus, a researcher at the University of Exeter, and colleagues are the first to examine the impact of rising CO2 in the ocean on the olfactory system of fish.

In collaboration with researchers at the Centre of Marine Sciences (CCMar, Faro, Portugal) and the Centre for Environment, Fisheries and Aquaculture Science (Cefas), the team compared the behavior of juvenile sea bass that swam in water of various acidity, including values which scientists predict for the end of the century if current trends continue unabated.

Since the Industrial Revolution in the 18th century, oceanic CO2 has risen by 43% and, by the end of the century, scientists predict it will grow by another 250%.

The results of their experiments suggest that the fish in acidic waters swam less and were less likely to respond to olfactory stimuli such as the smell of a predator. These kind of fish were also more likely to “freeze”, which is a sign of anxiety. 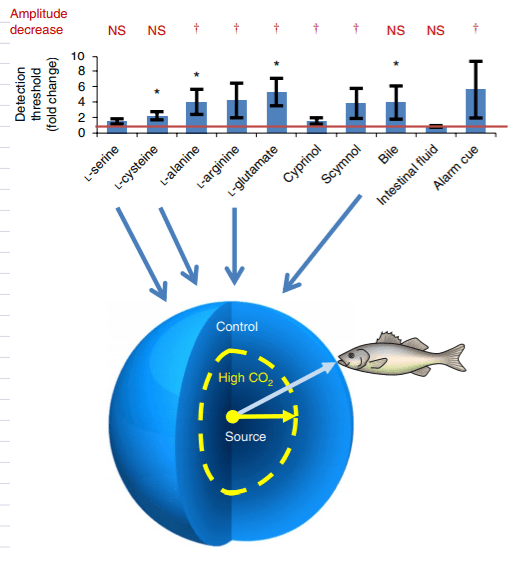 Elevated
CO2 reduces the active space (represented by the blue sphere) of an odor
by up to 80% (represented by the yellow dashed line) and the distance
to a detectable odor source (arrow) by up to 42% in European sea bass. Credit: Nature Climate Change.

To objectively measure the sea bass’ ability to detect different smells, the researchers recorded the activity of their nervous system while the nose of the fish was exposed to water of different CO2 concentrations and acidity.

“The sense of smell of sea bass was reduced by up to half in sea water that was acidified with a level of CO2 predicted for the end of the century. Their ability to detect and respond to some odours associated with food and threatening situations was more strongly affected than for other odours. We think this is explained by acidified water affecting how odorant molecules bind to olfactory receptors in the fish’s nose, reducing how well they can distinguish these important stimuli. Therefore, rising atmospheric CO2 levels threaten natural aquatic ecosystems and our food supply,” said Dr. Porteus in a statement.

[panel style=”panel-success” title=”Oceanic acidity is on the rise ” footer=””]At least one-quarter of the carbon dioxide (CO2) released by burning coal, oil and gas doesn’t stay in the air but instead dissolves into the ocean. Since the beginning of the industrial era, the ocean has absorbed some 525 billion tons of CO2 from the atmosphere, presently around 22 million tons per day.[/panel]

A poorer sense of smell is just one of many negative effects of oceanic acidification — which is sometimes called ‘climate change evil’s twin’. Take us humans, for instance, whose normal blood pH ranges between 7.35 and 7.45. Just a slight drop in blood pH of 0.2-0.3 can cause seizures, comas, and even death. Likewise, even a small change in seawater acidity can have harmful effects on marine life, impacting chemical communication, reproduction, the nervous system, and growth.

For some creatures, increasing ocean acidity is worse than in others. Because of lower pH of seawater, carbonate ions bind together, making them less readily available for corals, oysters, mussels, and many other shelled organisms that need them to build shells and skeletons. What’s more, ocean acidification causes coral bleaching by expelling the symbiotic algae living in their tissue, turning them white and subject to mortality.

“Our intriguing results show that CO2 impacts the nose of the fish directly. This will be in addition to the impact of CO2 on their central nervous system function suggested by others previously, which proposed an impaired processing of information in the brain itself. It is not yet known how rapidly fish will be able to overcome these problems as CO2 rises in the future. However, having to cope with two different problems caused by CO2, rather than just one, may reduce their ability to adapt or how long this will take,” Prof. Rod Wilson from the University of Exeter commented in a statement.

Perhaps, fish will have the chance to evolutionary adapt by the end of the century — but that seems unlikely. The team also studied the genes that are expressed in the nose and brain of sea bass, looking for any changes in response to elevated CO2 and acidity in the water. Strikingly, instead of finding some compensation for the sea bass’ reduced sense of smell, the researchers found evidence of reduced expression of genes for smell receptors in the nose, which actually makes matters worse. Although only the genes of sea bass were analyzed, many species share the same genes and smell receptors and, therefore, the findings should apply more broadly.

The findings appeared in the journal Nature Climate Change.