Social distancing means more time inside for our youngsters, and that also means more screen time. However, a new study suggests that this isn’t cause for much concern — young people today are just as socially skilled as those from the previous generation, it found.

The team compared teacher and parent evaluations of children who started kindergarten in 1998, which is around six years before the launch of Facebook with those who started school in 2010 when the first iPad debuted. According to their findings, both groups were rated similarly on interpersonal skills — such as the ability to form and maintain friendships and get along with people who are different from them. Both groups were also rated similarly for self-control, the ability to regulate one’s temper.

“In virtually every comparison we made, either social skills stayed the same or actually went up modestly for the children born later,” said Douglas Downey, lead author of the study and professor of sociology at The Ohio State University.

“There’s very little evidence that screen exposure was problematic for the growth of social skills.”

Downey conducted the study with Benjamin Gibbs, associate professor of sociology at Brigham Young University. The idea for the study came several years ago during — of all things — an argument Downey had with his son at a pizza restaurant. They were discussing whether younger generations had poorer social skills than older ones.

“I started explaining to him how terrible his generation was in terms of their social skills, probably because of how much time they spent looking at screens,” Downey said. “[His son] Nick asked me how I knew that. And when I checked there really wasn’t any solid evidence.”

As part of the study, each child was assessed by teachers six times during this time. They were also assessed by parents at the beginning and end of kindergarten and the end of first grade. The authors focused mostly on teacher evaluations because they are more abundant and perhaps more objective — although the results from parents were comparable, they say.

Children’s social skill did not decline between the 1998 and 2010 groups. In fact, teachers’ evaluations of children’s interpersonal skills and self-control tended to be slightly higher for those in the 2010 cohort than those in the 1998 group, Downey said. Even children in the two groups who were engaging in the most screentime showed similar development in social skills compared to those with little screen exposure, results showed.

As far as the teachers were concerned, children’s social skill did not decline between the 1998 and 2010 groups. In fact, teachers’ evaluations of children’s interpersonal skills and self-control tended to be slightly higher for those in the 2010 cohort than those in the 1998 group, Downey said. Even children in the two groups who were engaging in the most screen time showed similar development in social skills compared to those with little screen exposure, results showed.

“But even that was a pretty small effect,” Downey said. “Overall, we found very little evidence that the time spent on screens was hurting social skills for most children.”

“There is a tendency for every generation at my age to start to have concerns about the younger generation. It is an old story. The introduction of telephones, automobiles, radio all led to moral panic among adults of the time because the technology allowed children to enjoy more autonomy,” he says.

If anything, all this new technology is teaching younger generations that having good social relationships means being able to communicate successfully both face-to-face and online, Downey said.

The paper “Kids These Days: Are Face-to-Face Social Skills among American Children Declining?” has been published in the American Journal of Sociology.

University of Central Florida researchers might triple the resolution that LCD screens can pump out by three-fold, virtually overnight. The breakthrough was made possible by a novel surface which allows individual subpixels to display any of the three primary colors. 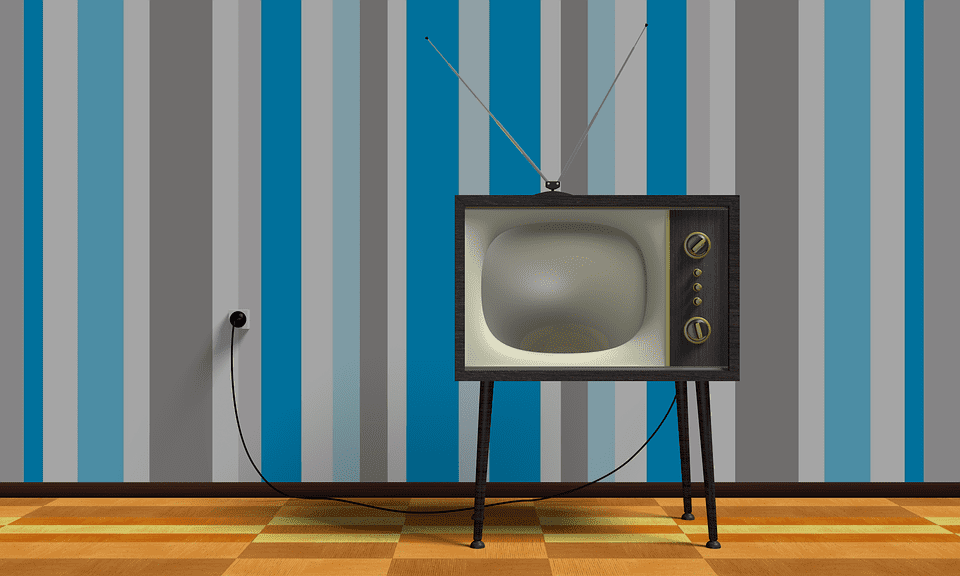 TVs and every other type of screen have gone a long way since their humble beginnings. But if there’s one thing consumers will always fawn over it’s got to be a bigger, better, crisper display. The first two usually are just a question of how much money you’re looking to spend, while the latter — well, it’s had a hard cap up to now.

One image to rule them all

Think of screens as a reverse compound eye. They build the complete image by stacking lots of tiny images — pixels — together, and by altering each pixel’s color, you alter the final image. In turn, each pixel is built by stacking three tinier images — subpixels — on top of one another. But subpixels are locked to a single color, either red, green, or blue, the three primary colors in television.

A white backlight shines through the subpixels and they’re either turned on or off by a shutter to create the pixel’s final color. For example, if the pixel has to be blue, the LCD shutter will block out the green and red subpixels. If it has to be purple, it will only cover the green subpixel, and so on. Finally, the intensity of the backlight determines the overall brightness of the screen and how light or dark the final color will be. 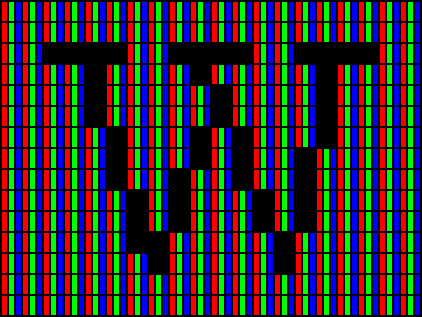 Simulation of how an LCD renders a Wikipedia’s infamous ‘W’ in black on a white background. No antialiasing.
Image credits Michael Geary.

So far, so good. The LCD has proven itself on our smartphones, computer screens, TVs and more. But because of its dependency on subpixels there’s a limit to how much resolution it can carry over a given surface. So the way to get a better resolution up to now was to just make the screen bigger, making it more expensive and less portable.

To address the limitation, a team from the University of Central Florida’s NanoScience Technology Center went the other way around and made the subpixel smaller — by making them be the pixels. The researchers showed that by using an embossed nanostructure surface and a reflective aluminum surface, they can create subpixels which can change color as needed. So rather than having one green, one red, and one blue subpixel make up a pixel, each subpixel of the “full-colour plasmonic display” can produce the entire range of color that the screen is capable of displaying.

Whoa, right? In theory, since each 1/3 of a pixel can now function as a pixel in its own right, the team’s tech can support three times the resolution of a traditional LCD of similar dimensions. Furthermore, each of these tiny pixels will be on unless they have to render black, meaning the screens will be far brighter than traditional LCDs. 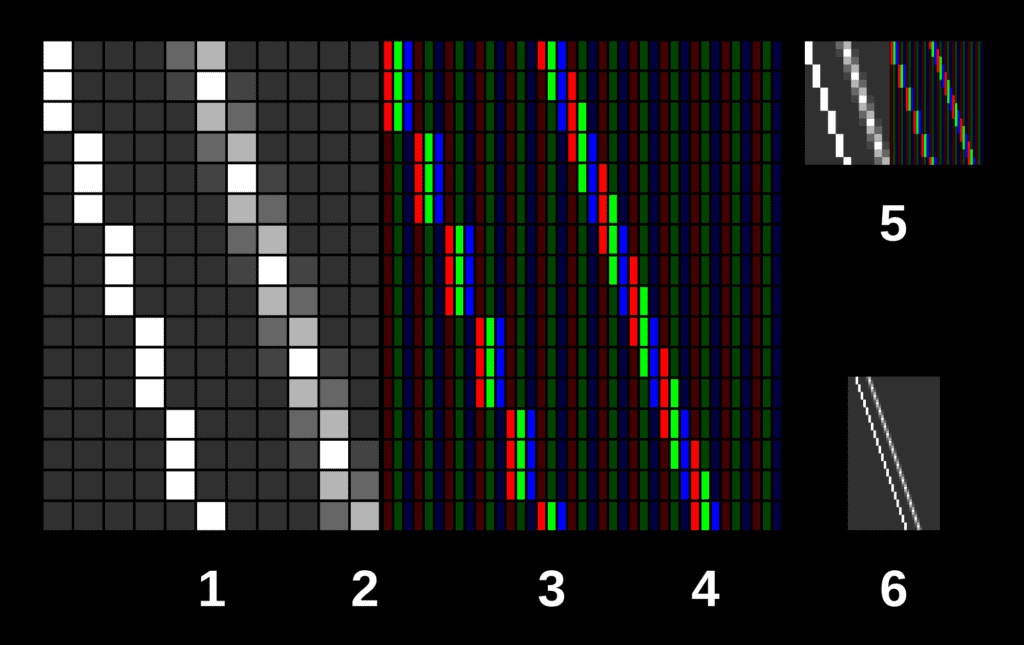 One downside, however, is that the screen is a tad limited in regards to frame rate. The display’s cycling times are “are somewhat invariant to voltage and in the 70 ms range, which equates to ∼14 Hz.” While this isn’t slow, it’s just not on even footing with the refresh rates traditional LCDs deliver, and nowhere near what high-end LCDs can churn out. So while it will work well on your phone and for other applications where frame-rate isn’t really an issue, if you want to play a fast-paced computer game it just won’t cut it.

But the technology is still in its infancy and as the team notes, it’s already “orders of magnitude faster than other colour-changing technologies”. Hopefully, these teething problems will probably be addressed in time. If so, it could mean a huge step up in image resolution — and as such quality and fidelity. First, however, the team plans to show that the screens are compatible with current hardware by scaling up their prototype.

“It allows you to leverage all the pre-existing decades of LCD technology. We don’t have to change all of the engineering that went into making that,” said Daniel Franklin, co-author of the paper.

The paper “Actively addressed single pixel full-colour plasmonic display” has been published in the journal Nature.

Quantum dots are nano-sized semiconductor particles whose emission color can be tuned by changing their dimensions. They feature near-unity emission quantum yields and narrow emission bands, which result in excellent color purity. Their properties have singled them out as the next big thing in various fields of technology, particularly illuminating mediums.

The dots are incredibly tiny — each of these crystals is only made up of around 5,000 atoms. Because of their physical properties, including their ability to emit or absorb light of different wavelengths depending on how they’re manipulated, there has been a lot of interest in applying them in various fields of science and technology. But we’ve never been able to successfully tie the dots together without using another substance. These structures’ properties were degraded by the second fraction, severely hampering our use of quantum dots.

Now, a team from Cornell University’s School of Chemical and Biomolecular Engineering has found a way to overcome this obstacle, arranging quantum dots together in an almost perfect structure.

Quuantum dot solids hold the potential to become the next great development in the manufacture and design of semiconductors.
Image credits Kevin Whitham, Cornell University.

Previous efforts have found that when placed on a fluid surface the crystals could be fused together, as they would float similarly to oil on water. However this negatively impacted the quantum dots’ properties, hampering the effectiveness of the structure as a whole.

“Previously, they were just thrown together, and you hoped for the best,” says lead researcher Tobias Hanrath in a telephone interview with The Christian Science Monitor.

“It was like throwing a couple thousand batteries into a bathtub and hoping you get charge flowing from one end to the other.”

Dr. Hanrath and his team’s breakthrough will finally allow us to connect the dots without another substance that would impact their purity and structure. This finding represents the culmination of several years’ work for the team, which the professor described as “playing lego but with atomic-sized building blocks.”

“If you take several quantum dots, all perfectly the same size, and you throw them together, they’ll automatically align into a bigger crystal,” Hanrath says.

“It’s the same idea as a bucket of tennis balls automatically assuming an ordered pattern, or stacking cannonballs on top of each other.”

The team started from some of their previously published research, including a 2013 paper published in Nano Lettersin which they detailed a method of tying the dots through controlled displacement of connector molecules, called ligand. That paper referred to “connecting the dots” – i.e. electronically tying each quantum dot – as being one of the most persistent hurdles to be overcome.

Now, the team has found a way to make the crystals not only arrange themselves in an orderly fashion, but also stick to one another. This enables the creation of crystal superlattices that are defect-free.

But there is still a way to go before quantum dots can leave the lab for a screen near you. The structure of the superlattice, while superior to ligand-connected nanocrystal solids, is still limited in its electron wave function. In essence, the lattice isn’t perfectly uniform in structure because the crystals aren’t all identical in size.

“Take silicon,” says Hanrath. “Every silicon atom is the same size. In our case, the building blocks are almost the same size, but there is 5 percent variability in diameter, so you can’t make a perfect crystal superstructure, but as far as you can, we’ve pushed it to the point of perfection.”

The full paper, titled “Charge transport and localization in atomically coherent quantum dot solids” has been published online in the journal Nature Materials and is available here.