After a suspenseful night at the European Space Agency (ESA), the bad news starts to sink in. At this moment, it seems quite likely that the ExoMars Schiaparelli lander crashed onto the Martian surface. 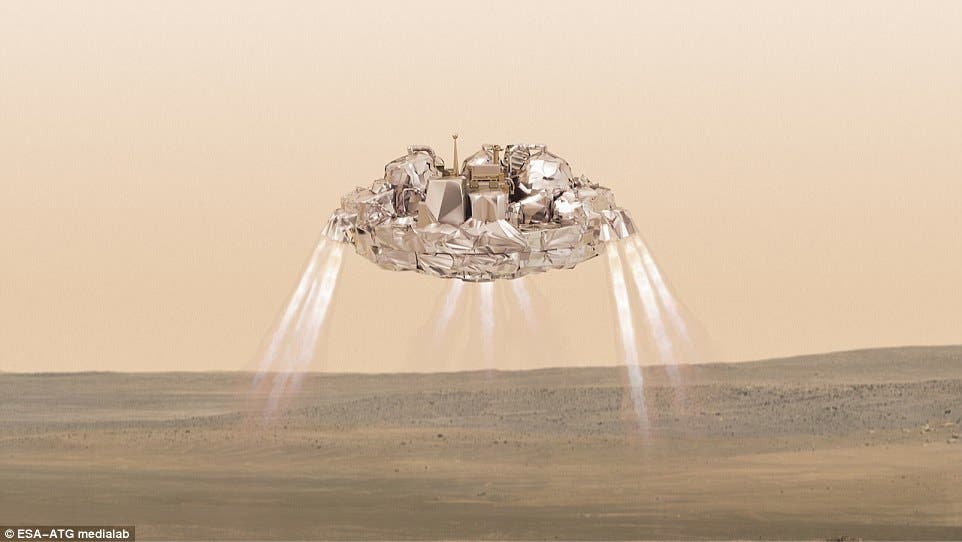 That’s how the landing should have looked like. Image credits: ESA.

The landing was supposed to be cushioned by 30 seconds of rocket thrust, but it seems that the thrust only worked for a few seconds. After that, the speed was too high and the landing was uncontrolled. There is also some indication that although they worked properly, the parachute and rear heat shield detached top soon. Although there’s no official statement, it seems safe to say that there was no soft landing as planned. Whether or not something in the lander still functional remains to be seen.

A NASA Mars orbiter will stay keen and look for signals from the lander, so if there’s anything that’s still alive and transmitting, we’ll probably hear it.

“If there is a signal coming, we would pick it up for sure,” said Andrea Accomazzo of the European Space Agency. He also said engineers received enough data from Schiaparelli to diagnose what befell it.

Schiaparelli was supposed to touch down on the Red Planet Wednesday at 10:48 a.m. EDT (1448 GMT). The first phase of the descent went swimmingly, and Schiaparelli’s mother ship, the Trace Gas Orbiter (TGO), is safely orbiting around Mars. But the second part didn’t go as planned.

“Following this phase, the lander has definitely not behaved exactly as we expected,” Accomazzo said.

Still, the big question remains: “Is the lander still alive?” – and if we really want the answer, then we’ll just have to wait a bit.

“We are not in a position yet — but we will be — to determine the dynamic conditions with which the lander has touched the ground, and then we will know whether it could have survived structurally or not,” Accomazzo said. “We are still processing the data from the descent. From the surface, we have no data at all.”

Mars seems to be a bit of a boogeyman for space engineers. Since the space age started, roughly a half of all Mars missions have crashed and burned. Although it had quite a few testing instruments on board, Schiaparelli’s demise isn’t the biggest of losses.

Schiaparelli and TGO were launched on 14 March 2016 on a Proton rocket from the Baikonur cosmodrome in Kazakhstan. The lander could offer limited, but useful, science capabilities. Its main purpose was to test the landing system that’s intended to place a rover on the Red Planet as part of the second phase of the mission, ExoMars 2020. The ESA previously wrote:

“Because Schiaparelli is primarily demonstrating technologies needed for landing, it does not have a long scientific mission lifetime: it is intended to survive on the surface for just a few days by using the excess energy capacity of its batteries. However, a set of engineering and scientific sensors will analyse the local environment during descent and after landing.”

As more time passes and the ESA has enough time to analyze all the data, we’ll know more about the situation.

The Schiaparelli spacecraft has just received its landing commands from the European Space Agency (ESA), and is expected to touch down on Mars on Oct. 19.

The ESA’s ExoMars mission is nearing its most climactic point — the touchdown. On March 14, the agency launched two connected crafts, the Trace Gas Orbiter and its Schiaparelli lander on a quest to reach the Red Planet. The two have almost completed their long trek through space, and will separate on Sunday, Oct. 16 above Mars. If everything goes well, Schiaparelli will land on the planet’s surface three days later, while the Trace Gas Orbiter will remain in orbit around it to study its atmosphere.

ESA put together a video to detail the crafts’ commands and landing procedure — basically, Schiaparelli will have to discharge the front and back aeroshells, deploy its descent sensors, braking parachutem and landing thrusters for a controlled impact on the surface. Here’s the video:

The craft will land in the Meridiani Planum, a flat region close to Mars’ equator. The lander will hit the atmosphere at about 21,000 km/h (13,000 mph), and will need to decelerate to safe landing speeds in about 6 minutes, ESA officials said in their statement. The craft’s sensors will monitor its height above the surface starting at 7 km (4 miles) altitude. When it reaches about 2 meters (6.5 feet) from it, it will hover for a moment then cut its thrusters for touchdown.

It will then start beaming up information about Mars’ winds (direction and speeds), humidity, pressure, temperatures, and so on, to the Orbiter. ESA hopes the data will help us better prepare for ExoMars’ rover mission, scheduled for 2020.