The 2019 Ridgecrest earthquakes struck California on the 4th and 5th of July, with magnitudes of 6.4, 5.4, and 7.1, respectively. Millions felt the shaking, and even more were frightened by a potentially devastating earthquake. Now, satellite images show just how powerful the earthquake was.

California is pierced by the San Andreas fault, which extends roughly 1,200 kilometers (750 mi). The fault poses great seismic threat, with many seismologists suspecting that the fault is overdue for a major earthquake.

The Ridgecrest earthquakes should also be understood in the context of the San Andreas fault. Although the earthquakes caused relatively minor damage, the effects were felt across much of Southern California, as well as Arizona and Nevada, and even Mexico. It’s estimated that some 30 million people experienced the main shock.

However, the desert satellite images help convey the full power of the earthquake.

A long scar produced along a geological fault in the aftermath of the Ridgecrest earthquake of July 5. The dark stain is water leaking from a pipeline that had ruptured. Image credits: Sotiris Valkaniotis / Google Earth / DigitalGlobe.

A geological fault is essentially a crack in the Earth’s crust. Typically, major faults are associated with, Earth’s tectonic plates, but smaller faults emerge all around the world. In an active fault, the two sides of the fault tend to move relative to each other over time — this movement can cause earthquakes.

A fault on the scale of San Andreas isn’t neatly carved through California. It produces many other faults that slice up in ribbons. These secondary faults can be ruptured by earthquakes, causing further temblors. When this happens, the effects can be severe.

These images are among the best of their kind. For starters, the earthquakes occurred in the desert, where displacements can be followed with relative ease. There’s no vegetation and nothing to obscure the geologists’ (or the satellites’) eyes.

“I like to think about the desert as an unpainted canvas,” said Ken Hudnut at the US Geological Survey. “And the earthquake tore a big rip through the desert canvas.”

These stunning visual effects have been produced using openly available satellite imagery from Google Earth and DigitalGlobe by earthquake geologist Sotiris Valkaniotis, who is based in Greece. It should be said that while the earthquake and faults are the main cause of the displacement, other causes such as landslides or liquefaction can also cause displacement.

In 1905, the small town of Salton, along with nearby tribal lands, suffered an unfortunate fate: it was completely flooded. Swollen with heavy rainfall and snowmelt, the Colorado River surged into a dry lake bed along California’s San Andreas Fault, submerging Salton and the surrounding area. But this flood did more than cover up a small town — it covered up a key, seismically active stretch of the San Andreas Fault, hiding its volatility away from human eyes. 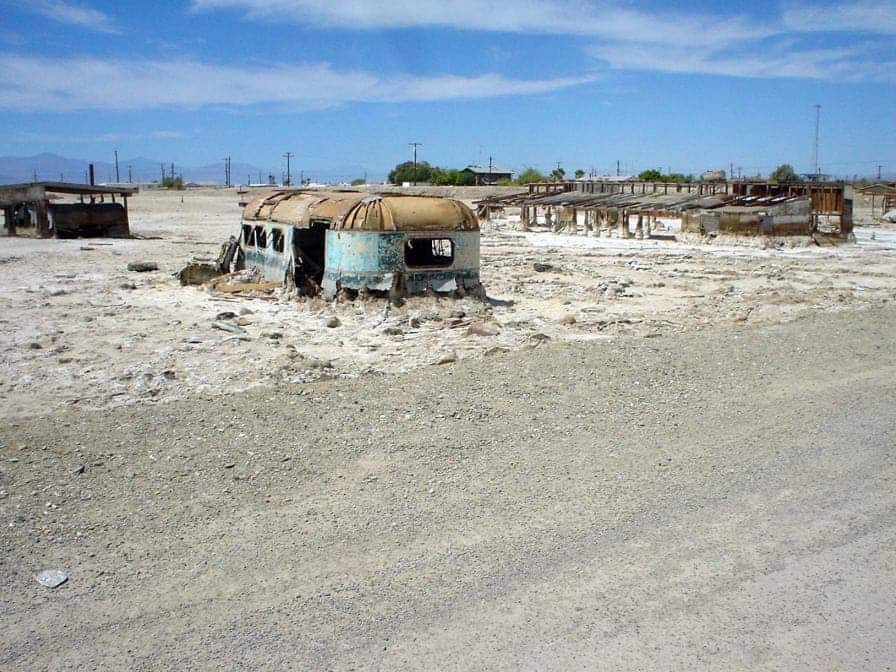 Houses covered by the Salton Sea.

More than a century after these floods, Utah State University geologist Susanne Jänecke began hypothesizing about the location of this fault zone. Although it was obscured by water and sediment, Jänecke took on the painstaking task of documenting the area through a careful geological and geophysical analysis.

They found that the faulted structure extends way beyond the currently known path of the San Andreas fault, and seems very volatile indeed — meaning it’s a very possible nucleus for a potential earthquake. Furthermore, because the area is so heavily folded and unstable, any earthquake in the area could trigger a cascade of dangerous aftershocks. Because the San Andreas area is already overdue for an earthquake, there’s a valid reason for concern. 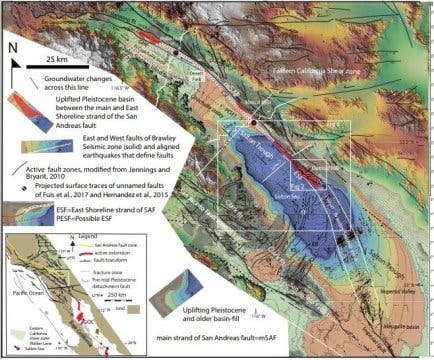 “We now have critical evidence about the possible nucleation site of the next major earthquake on the San Andreas Fault,” says Jänecke, professor in USU’s Department of Geology. “That possible nucleation site was thought to be a small area near Bombay Beach, California, but our work suggests there may be an additional, longer ‘fuse’ south of the Durmid Ladder within the 37-mile-long Brawley Seismic zone.”

However, there’s also some good news: even though this earthquake could come in at any moment, the newly discovered area lies farther away from the most populated areas. Also, while the heavily folded structures could trigger a flurry of smaller earthquakes, it could also act like a buffer.

“Fortunately, the northern continuation of the newly identified East Shoreline strand of the San Andreas Fault is farther away from major population centers than we first thought,” Jänecke says. “The fault lies along the eastern edge of Coachella Valley. In addition, the broken rock throughout the ladder structure could damped ground-shaking associated with the next large earthquake.”

Seismologists have repeatedly warned that the San Andreas area may soon be hit by a massive earthquake in the near future.

The San Andreas fault is way overdue for a major earthquake, one which will threaten millions of people on the US West Coast. But geologists have discovered another, secondary fault in the area, which might solve some of the mysteries we’ve had for so long.

A geologic fault is basically a big crack in the Earth’s crust. In an active fault, like in San Andreas, the edges move alongside the crack, creating earthquakes from time to time. Faults can vary greatly in size, from meters to hundreds of kilometers or even more. The San Andreas fault is huge, extending roughly 800 miles (1,300 km) through California, forming the limit between the Pacific Plate and the North American Plate. Seismologists expect a big earthquake coming soon in the area – the only question is when and where.

“Any time there is significant seismic activity in the vicinity of the San Andreas fault, we seismologists get nervous because we recognize that the probability of having a large earthquake goes up,” said director of the Southern California Earthquake Center Thomas Jordan.

The fault started forming sometime during the Cenozoic, about 30 million years ago. However, the southern part, which is highly active, was formed ‘only’ 5 million years ago. It was first identified in 1895 by Professor Andrew Lawson of UC Berkeley, who charted and studied the entire area.

San Andreas Fault in the Carrizo Plain. Photo by Ikluft

But for all his great effort, Lawson missed something.

The Salton Sea is the largest lake in California, and has a curious history. It was accidentally created between 1905 and 1907. For millions of years, the Colorado River has flowed into the Imperial Valley and deposited soil (creating fertile farmland), building up the terrain and constantly changing the course of the river. In the past few thousands of years, the area was alternatively a freshwater lake, a salty lake, and a dry salt basin. The cycle was occurring every 4-500 years, until 1905, when a local company developed an irrigation system and trapped the water. Without knowing, engineers did a great job at masking the second fault.

In fact, they masked it so well that it took a combination of LiDAR, multi-channel reflection seismology, and ocean-bottom seismometers to “see” it again. Scientists were tipped by a swarm of small earthquakes in September 2016, and when they looked, they found the new fault.

This makes the entire geological situation much more complicated and difficult to understand but in a strange way, it makes things a bit better. It basically alleviates some of the stress from the San Andreas fault, potentially explaining why there’s been no big temblor in the area.

“Based on the deformation patterns, this new fault has accommodated some of the strain from the larger San Andreas system, so without having a record of past earthquakes from this new fault, it’s really difficult to determine whether this fault interacts with the southern San Andreas Fault at depth or in time.”

Still, even so, this hasn’t prevented the San Andreas fault from creating a major (magnitude 7) earthquake every 175-200 years for the last thousand years. Basically, it adds a piece of the puzzle – a much more complicated piece of the puzzle.

“We need further studies to better determine the location and character of this fault, as well as the hazard posed by this structure,” says Valerie Sahakian, of the U.S. Geological Survey’s Earthquake Science Center.

It should be no surprise for anybody that a major earthquake is way overdue in LA; a study has shown that the area has a 99% chance of a big earthquake in the next 30 years (well, 25 years, since the study was conducted in 2008). Even with what should have been a huge wake up call for the US (the Japan earthquake 2 years ago), the country is still largely unprepared such an event. If something like this were to happen, the consequences would be disastruous. Now, as if all of these weren’t enough, another study warns of a possible “mega-quake” happening soon on the San Andreas fault. 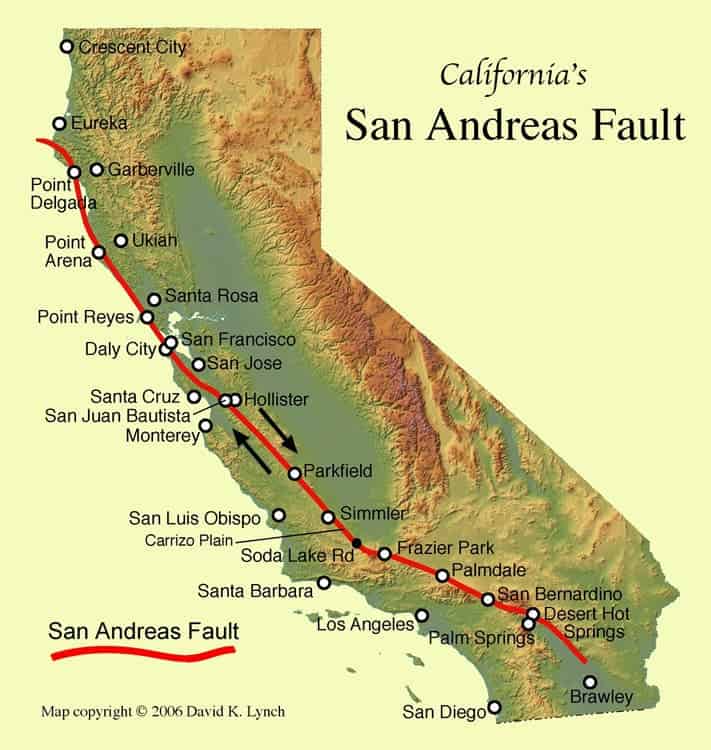 The research conducted by seismologists focused on a section of the fault called a creeping segment; the creeping was long thought to be the stable portion of a fault, rather acting as a bareer than as a factor in an earthquake. However, as a different study showed, the creeping areas of a fault aren’t as stable as previously believed; the study was published no longer than yesterday.

“In order for a quake to happen, the fault has to be locked and the strain has to be building up over years, said Caltech seismologist Kate Hutton. 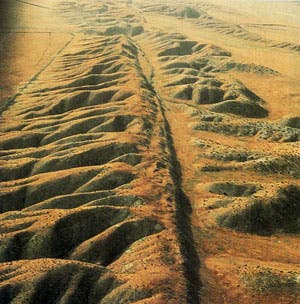 The question is if a quake that began in San Francisco on the San Andreas Fault could be continued into Southern California, to make things even worse.

“The answer is that it would be obviously a bigger earthquake than each side would have, but more it’s like two earthquakes that occurred at the same time and prevented the emergency services people from responding as they would if there was only one,” said Hutton.

Yet will all this research and study, the US seem pretty persistant to remain unprepared for any kind of event of this magnitude.