China’s National Space Administration released a trove of images from their lunar rover and they’re spectacular. We’re talking hundreds of tantalizing, HD and never-before-seen images of the Moon!

You can set up an account on China’s Science and Application Center for Moon and Deepspace Exploration website and have a look for yourself, view and download all the pictures you like – but the website is in Chinese, and the whole process may be a bit cumbersome. So we’ve ran through the collection and some photos already selected by others so you don’t have to bother. You can also see a much larger collection here and here.

China sent its first unmanned lunar probe, the Yutu, or “Jade Rabbit,” to the moon in 2013 as part of its Chang’e-3, thus becoming the first country after the USA and Russia to land on the Moon. The rover Yutu (translation: Jade Rabbit) reached the Moon’s surface on 14 December 2013 becoming the first soft landing on the Moon since 1976. Its scientific purposes were pretty straightforward: lunar surface topography and geological survey, lunar surface material composition and resource survey, Sun-Earth-Moon space environment detection, and lunar-based astronomical observation.

After a rough start which was considered a failure, Yutu started to deliver time and time again.

“We have for the first time detected multiple subsurface layers (on the moon),” said lead author Xiao Long, professor of the China University of Geosciences in Wuhan, attributing these layers to ancient lava flows and the weathering of rocks and boulders into regolith, or loose layers of dust, over the past 3.3 billion years or so.

The rover also discovered a new and intriguing type of rock on the Moon.

“The diversity tells us that the Moon’s upper mantle is much less uniform in composition than Earth’s. And correlating chemistry with age, we can see how the moon’s volcanism changed over time,” said Bradley Joliff of the Washington University of St Louis, the only American partner in the Chinese team.

However, information about how the mission is going remains very limited. Unlike NASA and the European Space Agency, China reveals very little about how their mission is going. To be honest, I’m surprised they even released so many photos but for the time being, let’s enjoy the lovely photos.

The moment many of us have been waiting for is almost here: Curiosity prepares to make its first contact with a Martian – a Martian rock, that is.

The rover has been on the Red Planet for six weeks now, still preparing its devices, namely its Alpha Particle X-Ray Spectrometer (APXS) which will be used to analyze rock composition. Powered by 0.7 milligram of radioactive curium, APXS first irradiates samples with alpha particles (which are just nuclei of helium atoms), to make them sensitive to the chemical analysis it will perform.

“We’re now at a point where we want to start to do some surface-contact science,” mission project manager Richard Cook of the NASA Jet Propulsion Laboratory in Pasadena, Calif., said during a September 19 teleconference.

Now, Curiosity is heading towards the Glenelg geologic site, where multiple terrains meet; mission personnel analyzed the site and decided it was definitely worth a first stop, especially as a certain rock seems to be quite uniform. The idea is to crosscheck the measurements from APXS against those of those from the rover’s ChemCam instrument, which has a smaller field of view.

“The hope is that we can analyze this rock and do some cross-comparisons between the two instruments,” Grotzinger said. “Not to mention it’s just a cool-looking rock.”

The rock has been named Jake Matijevic – a member of the rover team, who died sadly, just two weeks after landing, following “a lifelong battle with asthma and other upper respiratory ailments”.

Following an absolutely perfect launch with no apparent problems whatsoever, NASA’s Curiosity rover has started its long way towards the Red Planet. 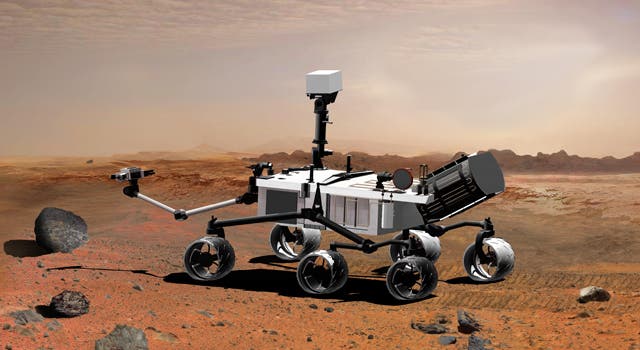 The car-sized rover blasted off Saturday at 10:02 a.m. ET from Cape Canaveral Air Force Station and separated from the rocket right on schedule, 45 minutes later. The pinnacle of technology in spatial rovers, Curiosity is now reducing the 570 million kilometers that separate it from Mars; so far, there’s no reason to worry whatsoever.

“We are in cruise mode,” said MSL project manager Pete Theisinger of NASA’s Jet Propulsion Laboratory in Pasadena, Calif. “Our spacecraft is in excellent health, and it’s on its way to Mars.”

The main purpose of this mission is to determine whether Mars is, or ever was, host to life; don’t let your imagination fly just yet, because NASA isn’t searching for little green men. Some little green bacteria would do just fine, and please everybody for that matter.

This project faced numerous problems since it was first conceived in 2003. At several moments, it was even in peril of being disbanded, but through hard work, NASA’s astronomers and engineers managed to pull it off, even though at a cost much higher than initially anticipated. But these problems and difficulties made today’s successful launch even sweeter.

However, it will take almost a year only to get to the red planet, and the major difficulties start then, so Theisinger can’t relax just yet.

“We all recognize that this is the prologue to the mission — necessary, but not sufficient,” he said. “We all have our work cut out for us in the next eight and a half months.”

Curiosity is scheduled for Mars in August 2012, but the mission has many difficulties and adjustments to pass. For example, numerous navigational corrections will have to be made to ensure a safe and quick arrival on Mars. The team will also perform tests on the 10 highly sophisticated pieces of equipment Curiosity is equipped with.

Furthermore, engineers will have to use this time to prepared for landing on Mars. They’ll stage 10 separate operational readiness tests during the next eight months, estimating and improving their ability to adapt to different situations, more or less pleasant.

Due to its size, which was necessary for all the instruments, as well as to provide higher mobility and resistance, Curiosity won’t be able to land in a similar fashion to its cousins, Spirit and Opportunity. Researchers had to employ a landing style which is without precedent: they will use a rocket powered sky crane to lower the rover in a daring maneuver.

The report submitted by Steve Squyres will weigh heavily on this project, and not only this one

The joint exploration by NASA and ESA, encompassing joint efforts from the American and European space agency seemed like a dream come true for astronomers from both sides. Especially after the European side designed and started building the Mars Rover, everything appeared to go in the right direction. But the issues NASA is facing at the moment will take their toll on this project too, as with so many others.

A new report from the US National Research Council claims that the esimated budget of $3.5bn for the American part is too high; one billion dollars too high, to be more exact. This leaves the joint initiative facing major problems, as the two sides will have to find a way to solve one side’s problems and work together to achieve the goal they set, with a huge budget gap.

“We’re quite confident that a really good mission can be done for $2.5bn,” said the survey’s chairman Professor Steve Squyres, “but we leave it to those two agencies to work out exactly the details of what that would look like.

So yeah, we cut one third of all your money, but we’re positive you guys will be able to figure something out – sounds like a good plan to me.

“Critically, we feel that the de-scopes have to be shared equitably between Nasa and Esa because it’s so important to preserve the partnership with Esa. We can’t force all the bad news on to Esa; it’s got to be a fair split.”

Things seem to be a bit stuck, and until the two space agencies can find out some sort of brilliant solution to this problem, what wil be done exactly in 2018 remains a matter of debate for everyone. I’m just hoping NASA will rid itself of this kind of issues, because the report I told you about above will be extremely influential.

As any traveler surely knows, it’s always cheaper if you travel one way; especially if you go to Mars. Recently, two renowned scientists made a proposal that startled the whole scientific community: one way trips to Mars. The whole purpose would be to colonize the planet faster and more economically, pretty much in the way the first settlers came to America, not expecting to go back.

“The main point is to get Mars exploration moving,” said Dirk Schulze-Makuch, a Washington State University professor who co-authored an article that seriously proposes what sounds like a preposterous idea.

However, numerous astronauts frown upon this idea.

“This is premature,” Ed Mitchell of Apollo 14 wrote in an e-mail. “We aren’t ready for this yet.”

However, NASA seems to really like this idea. President Barack Obama has already outlined a plan for going to Mars in the mid 2030s, but he hasn’t mentioned the fact that the astronauts wouldn’t be coming back. Schulze-Makuch and Paul Davies, a physicist at Arizona State University make a pretty strong case, arguing that in the more and more plausible scenario of an Earth cataclism, mankind has to be prepared somehow – and the best way would be one way trips, which would start in two decades.

“You would send a little bit older folks, around 60 or something like that,” Schulze-Makuch said, bringing to mind the aging heroes who saved the day in the movie “Space Cowboys.

It’s also important to understand that this is not a suicide mission.

“The astronauts would go to Mars with the intention of staying for the rest of their lives, as trailblazers of a permanent human Mars colony,” they wrote. “We are on a vulnerable planet,” Schulze-Makuch said. “Asteroid impact can threaten us, or a supernova explosion. If we want to survive as a species, we have to expand into the solar system and likely beyond.”

And if you think about it, they will actually feel more connected to home than Antarctic explorers. Now ladies and gents, an interesting question arises here: would you sign up for such an affair ?

NASA’s Mars Exploration Rover Opportunity is already in its 7th year on Mars, and over the years it provided some quite useful information; researchers from NASA have been constantly working on ways to improve and optimize it by constantly uploading new software.

Such is the case with the software they applied this winter, which makes it able to make its own choices about whether rocks are worth the effort of gathering additional information or not. Basically, the machine looks at a rock and sees if it meets the required criteria, such as colour or rounded shape.

And she should know, as she’s a rover driver and senior developer of the software system.

“It found exactly the target we would want it to find,” Estlin said. “This checkout went just as we had planned, thanks to many people’s work, but it’s still amazing to see Opportunity performing a new autonomous activity after more than six years on Mars. We spent years developing this capability on research rovers in the Mars Yard here at JPL,” she adds. “Six years ago, we never expected that we would get a chance to use it on Opportunity.”

You can get online updates from the Mars Rover here, and more information about AEGIS here