The port of Rotterdam will soon feature a new marine resident. The ‘Waste Shark,’ a drone roughly the size of your average car, will float around the port’s waters keeping an aye out for trash which it can “eat” for processing. 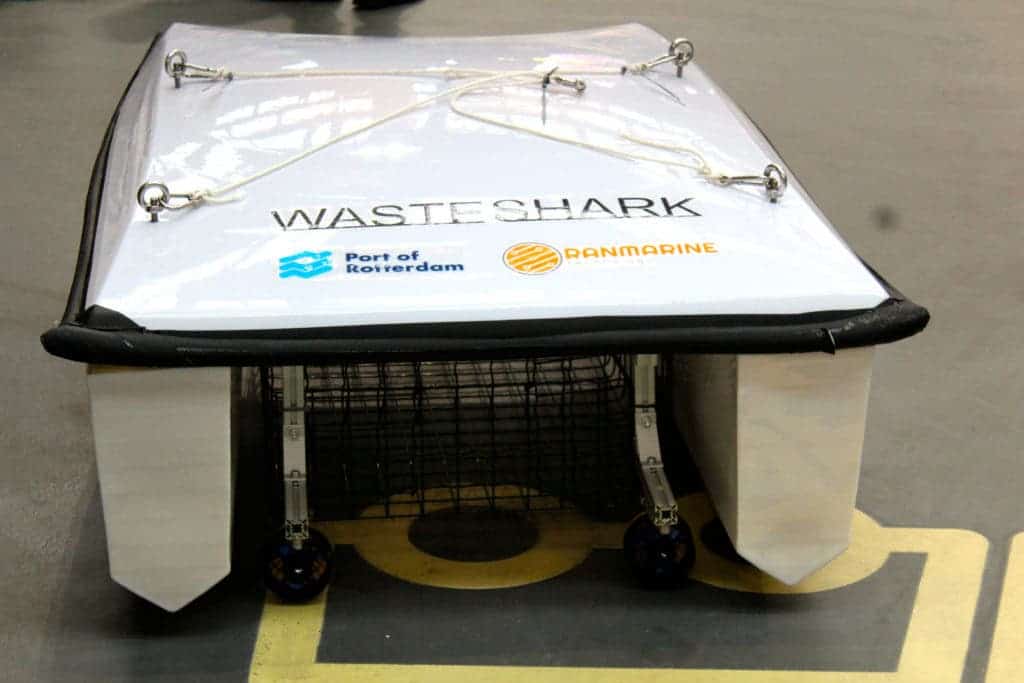 Put a fin on it!
Image credits RanMarine.

The city of Rotterdam, Holland has been making a lot of effort in the past few years to lessen its environmental impact, and the port hasn’t been overlooked. Under the startup program PortXL, the city’s port authority has also been promoting new solutions to help make it more efficient, more sustainable, and overall just a better place. At the conclusion of the program’s first year, the port signed an agreement with South-African startup RanMarine to deploy a new drone on its waters — the Waste Shark.

The Port of Rotterdam has already announced one drone resident — the AquasmartXL, a small unmanned boat equipped with a camera that allows real-time inspection and surveillance of the water surface. But where the AquasmartXL is the eyes of Rotterdam, the Wave Shark will be its mouth. This drone is roughly the size of a car and can eat up to 500 kilograms (1102 pounds) of trash using a ‘mouth’ 35 cm under the water line. It will “fight ‘plastic soup’ at the source as 90% of all waste in the ocean starts in urban areas,” PortXL’s page reads.

Allard Castelein, Chief Executive Officer of the Port of Rotterdam Authority said that the Rotterdam Port Authority is determined to explore all avenues of innovation, as stated in their operational philosophy.

“Innovation cannot be forced. However, you can create an environment in which innovation is likely to take place and be in line with the market,” he said.

“We support research in conjunction with universities, such as the Port Innovation Lab with the Delft University of Technology and of course our own Erasmus University in Rotterdam. And we collaborate with contests for students. In addition, we support Dutch start-ups that are relevant to the port, but we also scout worldwide via PortXL; the first accelerator that focuses on port start-ups on a global level.”

The contract requires four Waste Sharks For to scour the waters for the next six months as part of a test run for the drones. They will operate in areas where it is too difficult, dangerous, or undesirable to use manned solutions. This includes under jetties, bridges and other structures.

If there’s one thing we all want more of in our cities it’s plants; soft grass, pretty flowers and shade-providing trees all make for comfy places to relax, clean the air and are just awesome. But where do we find the space for trees in our cities with all the buildings already vying for the limited space available?

Dutch collective Mothership’s answer is waterways. The group plans to install the “Dobberend Bos” (Bobbing Forest) in Rotterdam’s Rijnhaven harbor next spring. The forest will consist of 20 trees firmly planted inside of colorfully re-purposed buoys.

The group was insired by Colombian artist Jorge Bakker’s “In Search of Habitus,” an aquarium filled with teeny-tiny model buoys and trees. Bakker is known for his sculptures and installations that put often-overlooked elements of our cities, such as water and wind, into the foreground.

Bakker’s “In Search of Habitus,” the piece that served as inspiration for the Forest.
Image via inhabitat

After years of toying with the idea and experimenting with prototypes, the Motership designed a small floating forest that they’ll install in Rotterdam’s historic Rijnhaven. The harbor will host model projects in floating architecture until 2018.

“These miniature trees floating on the water raise questions about the relationship between the city dweller and nature,” according to a statement on the Dobberend Bos website.
Image via inhabitat

The city’s tree bank will provide the plants, and the 20 required buoys will be repainted and adapted by Mothership members. The harbor’s brackish waters won’t be allowed to reach the trees, Dobberend Bos website reads.

“These miniature trees floating on the water raise questions about the relationship between the city dweller and nature,” the website goes on to state.

“What does a city dweller have with nature and how humans and nature relate to the world around them?”

The project is scheduled for implementation on March 16, 2016.