Humans aren’t the only ones who get sad when their significant other isn’t around, new research from the University of Burgundy, Dijon, France, reveals. 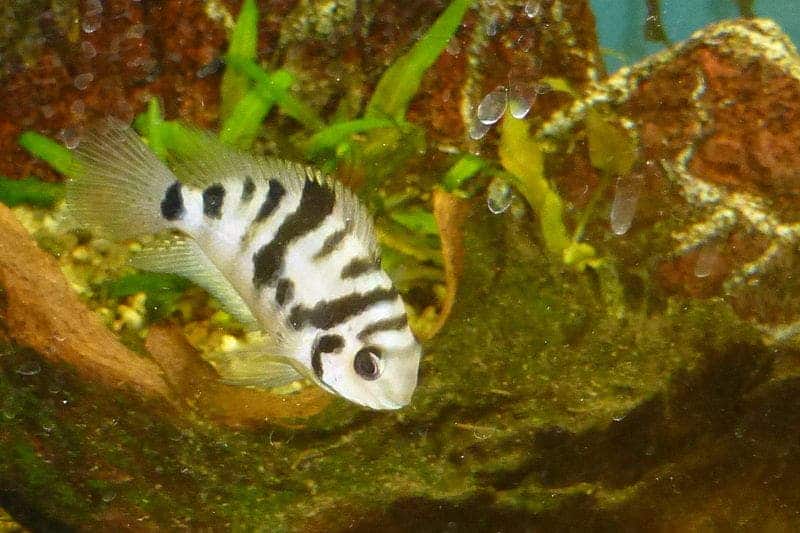 Amatitlania siquia may only be a small fish, but its heart is really big — metaphorically speaking. This species is monogamous, with individuals forming durable, tight parings and cooperating closely as partners to build nests and rear their young. This made them an ideal test subject to see whether animals also feel negative emotional effects when separated from their partner — and, according to the new study, they do.

Till death do us part

“To the best of our knowledge, this study is the very first demonstration of emotional attachment to the sexual partner in a non-human species. The effect of the absence of the sexual partner on the mood of the individual has never observed in any other species so far,” Dr. François-Xavier Dechaume-Moncharmont, the paper’s corresponding author, told me in an email.

“Please note that we do not say that such an emotional attachment does not exist in other species, but it was not the subject of research so far. Incidentally, it is also the first use of the cognitive judgment bias test in a fish species.”

The team of biologists from the University of Burgundy managed to objectively quantify the emotional shift the fishes felt when separated from their partner. When this partner was removed, they report, the fishes became pessimistic, suggesting that they do indeed form emotional attachments to their sexual partners. The findings raise the question of whether such attachments offer an evolutionary or adaptive edge to the fish and, by extension, if these advantages also hold true for humans.

The main accepted reason for why humans form emotional attachments to their partners is that this should help promote stability in the couple and allow both parents to focus on raising the children instead of fighting and bickering. Two parents are better than one, as the old saying goes, so this propensity of ours to form attachments to our partners was likely a key component of our success as a species throughout the ages.

The team was curious to see if other monogamous species that form long-lasting couples rely on the same strategy. However, they first had a hurdle to overcome — assessing such subjective feelings in an animal model that can’t tell you what emotions they are experiencing. So, for the study, the authors adapted a technique devised for and used in psychology — the judgment bias test.

“How can we measure the mood in a fish species? The solution was to try transposing the judgement bias test in a fish species, a non-verbal animal species,” Dechaume-Moncharmont explained “To do so, we had to teach the fish to open artificial box, which was not trivial but the videos are quite illustrative.”

In essence, what the team did was train the fish to discern between two types of boxes — one empty and one containing a tasty reward in the form of a plump larva — based on their color. The reward box was black, and the empty one was white. After the fish got the hang of it, the researchers mixed things up by presenting the animals with a grey-colored box.

The idea behind the experiment is to use the speed with which the fishes open box as a proxy for their emotional state. How fast the fishes opened it indicates their mood. Optimistic individuals are expected to respond more rapidly (“glass half full”) than the pessimistic ones (“glass half empty”). The team reports that — much the same case as with humans — the absence of the partner affected the fishes’ mood, making them more pessimistic.

The team explains what this level of emotional attachment between partners is the first criteria for characterizing romantic love, which is fundamentally perceived as a unique property of our species. In other words, at least parts of the whole that we call ‘romantic love’ aren’t human-specific.

In the future, the team plans to see how long these negative effects on mood can last for, and how they relate to each individual’s sexual choices.

“We would also like to assess the existence of such an emotional attachment to the partner in other species. We predict that other monogamous species are good candidates,” Dechaume-Moncharmont adds. “If the independent evolution of such attachments is confirmed in several phylogenetically distant species, it could indicate that these emotional biases are maybe more than bias, that they may have some adaptive values.”

“Love is maybe not so irrational.”

The paper “Pair-bonding influences affective state in a monogamous fish species” has been published in the journal Proceedings of the Royal Society B: Biological Sciences.

When it comes to romance, it seems we all agree — mother knows best.

A national study found that we often follow our mothers’ relationship patterns. People whose mother had a greater number of partners (be them in a marriage or cohabiting relationship) were more likely to have more partners than their peers. The authors say it’s likely that the personality traits and social skill set mothers pass on to children make them more or less likely to form stable relationships.

“Our results suggest that mothers may have certain characteristics that make them more or less desirable on the marriage market and better or worse at relationships,” said Claire Kamp Dush, lead author of the study and associate professor of human sciences at The Ohio State University.

“Children inherit and learn those skills and behaviors and may take them into their own relationships.”

Dush says that the study expands on previous findings regarding the link between family dynamics and relationship patterns. For example, a lot of prior research found that children from divorced couples are more likely to divorce themselves — but the current study broadens the picture. “It’s not just divorce now,” Dush explains.

“Many children are seeing their parents divorce, start new cohabiting relationships, and having those end as well,” she said. “All of these relationships can influence children’s outcomes, as we see in this study.”

The study drew on data from the National Longitudinal Survey of Youth 1979 (NLSY79) and the National Longitudinal Survey of Youth Child and Young Adult (NLSY79 CYA), run by the Ohio State’s Center for Human Resource Research. The (7,152) people in the NSL79 CYA survey were the biological children of women in the NLSY79, allowing researchers to analyze long-term relationship patterns and the number of partners over both generations — the surveys included information on marriage, divorce, cohabiting relationships, and their break-ups. Both studies tracked each participant for at least 24 years.

The team reports that a mother’s number of marriages and cohabiting partners both had similar effects on how many partners their children had. One key difference between the two was that older siblings, who were exposed to their mother’s cohabiting relationships for longer, went on to have more partners than younger siblings — who were less exposed to the relationships, the team explains.

“You may see cohabitation as an attractive, lower-commitment type of relationship if you’ve seen your mother in such a relationship for a longer time,” Kamp Dush said. “That may lead to more partners since cohabitating relationships are more likely to break-up.”

The paper also treats three theories about why children tend to follow their mothers’ relationship patterns:

When parents break up, the family or household loses one source of income. Economic hardship associated with divorce can lead to poorer child outcomes and a more difficult transition to adulthood. These kids are then more likely to have more unstable relationships as adults. However; while the team did find a relationship between economic instability and one’s number of partners, controlling for economic background didn’t have any significant effect on the mother-child link in the number of partners. This suggests that while money mattered, it wasn’t the main reason why so many people follow the same relationship patterns as their mothers.

The second theory proposes that people simply learn by example. Actually witnessing your mother going through one or more divorces or break-ups leads you to have more partners yourself. Should this be true, older half-siblings who saw their mother going through multiple relationships should be more at risk of engaging with multiple partners — but they’re not, the researchers say. The team didn’t find a statistically greater number of partners for these kids compared to younger siblings who did not experience instability.

“What our results suggest is that mothers may pass on their marriageable characteristics and relationship skills to their children — for better or worse,” Kamp Dush said. “It could be that mothers who have more partners don’t have great relationship skills, or don’t deal with conflict well, or have mental health problems, each of which can undermine relationships and lead to instability.”

“Whatever the exact mechanisms, they may pass these characteristics on to their children, making their children’s relationships less stable.”

The paper “The intergenerational transmission of partnering” has been published in the journal PLOS ONE.