Researchers mixed Hollywoodian magic with science to create a striking — and worrying — demonstration of how bacteria encounter, adapt, and finally thrive even in the presence of antibiotics.

Acquired drug resistance is rapidly becoming a problem for medicine — germs adapt to our medicine much faster than we can develop and distribute new ones. But exactly how fast this adaptive process takes place isn’t really something people realize. A new Harvard Medical School and Technion-Israel Institute of Technology experiment, inspired by Hollywood’s tv-magic, offers the first large-scale example of how fast bacteria evolve to deal even with immense concentrations of antibiotics.

The experiment consisted of placing the bacterium Escherichia coli in a huge 2-by-4-foot petri dish filled with agar (the jelly-like material used to nurture bacterial colonies in the lab). The team then divided this area into seven sections and treated them with various doses of medicine. The outermost slices were drug-free, followed by slices with just enough antibiotics to kill the bacteria. Each section that followed would receive a ten-fold increase in dose, so the middle area contained 1,000 times the minimum required concentration. Dubbed the MEGA (Microbial Evolution and Growth Area) plate, the design represents a more realistic environment to study how species overcome the spatial and evolutionary challenges that drive evolution, the researchers said.

“We know quite a bit about the internal defense mechanisms bacteria use to evade antibiotics but we don’t really know much about their physical movements across space as they adapt to survive in different environments,” said study first author Michael Baym, a research fellow in systems biology at HMS.

The team pointed a camera at the MEGA plate and took snaps of the colonies over the next two weeks. The time-lapse they made with these snaps is a powerful display of evolution at work — and a bone-chilling reminder of just how flimsy our drugs are against pathogens.

This plate isn’t a perfect illustration of how bacteria behave in the real world — in hospitals for example — but it does mimic them more closely than a traditional petri dish. This is because in bacterial evolution, space, size, and geography play a hugely important role, the team explains. Just like walking on a paved street is different from hiking in rough terrain for us, expanding in environments with varying antibiotic properties in the wild or in homogeneous settings in the lab are two very different things if you’re a bacteria.

The experiment proposes to teach HMS students about evolution in an engaging and visually captivating way. Senior study investigator Roy Kishony of HMS and Technion say the inspiration came from a digital billboard for the 2011 film Contagion. It showed a giant lab dish where glowing microbes crept slowly over a darker background to spell out the movie’s title.

“This project was fun and joyful throughout,” Kishony said. “Seeing the bacteria spread for the first time was a thrill. Our MEGA-plate takes complex, often obscure, concepts in evolution, such as mutation selection, lineages, parallel evolution and clonal interference, and provides a visual seeing-is-believing demonstration of these otherwise vague ideas. It’s also a powerful illustration of how easy it is for bacteria to become resistant to antibiotics.”

Postdoctoral research fellow at MIT and co-investigator Tami Lieberman, who was a graduate student in the Kishony lab at the time of the experiment, says the images captivate laymen and trained professionals alike.

“This is a stunning demonstration of how quickly microbes evolve,” she said. 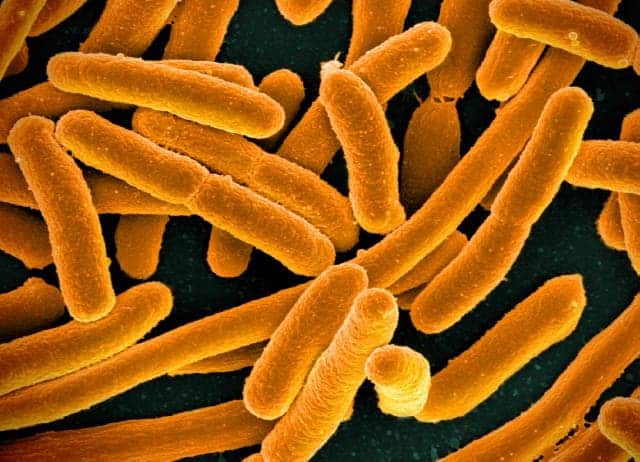 The experiment also allows us insight into how bacteria adapted to environmental constraints — in this case, increasingly deadly concentrations of drugs:

Through small increments, non-resistant bacteria gave rise to moderately then highly resistant mutants. In just 10 days, the culture spawned mutants capable of surviving 1,000 times the dose of antibiotic trimethoprim that was deadly to the initial bacteria. When researchers used another antibiotic — ciprofloxacin — bacteria adapted to 100,000 times the initial deadly dose.

These mutations initially stiffen the bacteria’s growth rate — suggesting that while adapting to the dose, bacterias still found it hard to develop. Once fully resistant to the drug, they regained their normal growth rates.

The most resistant strains weren’t always the first to expand. Sometimes, they lagged behind weaker strains as they were developing into areas with higher doses of antibiotics. This goes against the commonly held belief that only the most resistant mutants survive high concentrations of a drug.

“What we saw suggests that evolution is not always led by the most resistant mutants,” Baym said. “Sometimes it favors the first to get there. The strongest mutants are, in fact, often moving behind more vulnerable strains. Who gets there first may be predicated on proximity rather than mutation strength.”

The full paper “Spatiotemporal microbial evolution on antibiotic landscapes,” has been published in the journal Science.