Researchers have taken things to the next level by developing an AI that is basically a mathematical conjecture generator. Conjectures are mathematical statements that are suspected to be true but have not yet been rigorously proven. Any mathematician will tell you that these are their bread and butter, which they use to develop mathematical theorems. Now, we have computers that can feed mathematicians with new conjectures, which they’ll have to prove, and in the process might revolutionize the field.

The AI developed by the team at Technion-Israel Institute of Technology specifically deals with conjectures surrounding another fundamental element of mathematics: constants. In math, constants are key numbers with fixed values that emerge naturally from different mathematical computations and structures.

Take for instance pi, arguably the most important constant in mathematics. It gives the ratio between a circle’s circumference and diameter, which stays the same value for every circle, no matter how large. Other important fundamental constants include Euler’s number and the golden ratio.

Not anyone can make conjectures about such fundamental constants. In fact, this is something typically reserved for geniuses like Newton, Riemann, Gauss, or Srinivasa Ramanujan. The latter was so good at it that Ramanujan is credited for the discovery of thousands of innovative formulas in number theory — and he did so with no formal training, starting from a poor family background.

In honor of the great mathematician, the researchers named their AI the Ramanujan Machine. Like the late Indian genius, they hope that the AI becomes just as prolific at conjecturing unproven mathematical formulas.

The software has made its own conjectures that independently formulate well-known mathematical constants such as pi, Euler’s number (e),  Apéry’s constant, and the Catalan constant, as well as a couple of original universal constants.

“Our results are impressive because the computer doesn’t care if proving the formula is easy or difficult, and doesn’t base the new results on any prior mathematical knowledge, but only on the numbers in mathematical constants. To a large degree, our algorithms work in the same way as Ramanujan himself, who presented results without proof.”

“It’s important to point out that the algorithm itself is incapable of proving the conjectures it found — at this point, the task is left to be resolved by human mathematicians,” said Assistant Professor Ido Kaminer from the Faculty of Electrical Engineering at the Technion.

For thousands of years of mathematical history, conjectures were reserved for rare genius. This is why we only have a few dozen important formulas discovered in the last hundred years of research. But in a few hours, the Ramanujan Machine “re-discovered” all the formulas for pi discovered by Gauss, which took him a lifetime of work, as well as dozens of new formulas that were unknown to Gauss.

“Similar ideas can in the future lead to the development of mathematical conjectures in all areas of mathematics, and in this way provide a meaningful tool for mathematical research,” wrote the researchers in their study published in Nature.

The researchers launched a website where the public can find algorithmic tools that anyone can use for the advancement of mathematical research. 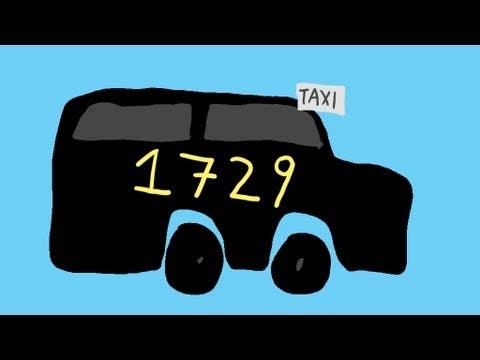 By 1918, the Indian born, self-thought mathematical genius Srinivasa Ramanujan was already making headlines all over the world, recognized as one of the most brilliant mathematicians of his time.  He was born into a poor Brahman family and with no formal education. Luckily he came across a couple of textbook maths, and since he didn’t have enough material, Ramanujan had to find solutions to problems on his own.

In 1914 he arrived at Cambridge on a scholarship, at the insistence of a professor called G. H. Hardy. Ramanujan’s time in England was most fruitful, expressing his talents in continued fractions and hypergeometric series.

His health was another matter, and Ramanujan sadly fell ill with tuberculosis. One day, Hardy visited Ramanujan at the hospital as he regularly had before, stepping out of a black cab with the number 1729, “rather a dull one,” Hardy said as he met Ramanujan. The great mathematician begged to differ.

“No, Hardy, it’s a very interesting number! It’s the smallest number expressible as the sum of two cubes in two different ways.”

Ramanujan had a fantastic memory and intuition about numbers. In the case of 1729, the number can be written as 1 cubed + 12 cubed and 9 cubed + 10 cubed. There’s no smaller integer that can be written as the sum of two cubes. The incident launched the  “Hardy-Ramanujan number,” or “taxi-cab number”, a mathematical oddity that had mathematicians fascinated to this day. Only six other taxi-cab numbers have been found that share the same properties (smallest numbers which are the sum of cubes in n different ways).

But 1729 wasn’t just some quirky mathematical tidbit with no practical value, apart from entertaining mathematicians and Futurama fans.  Ken Ono, a number theorist at Emory University, was perusing the Ramanujan archive while visiting Cambridge. He found notes scribbled by Ramanujan a year after Hardy told him all about his dull taxi number.

“From the bottom of one of the boxes in the archive, I pulled out one of Ramanujan’s deathbed notes,” Ono recalls. “The page mentioned 1729 along with some notes about it. Andrew and I realized that he had found infinitely near misses for Fermat’s Last Theorem for exponent 3. We were shocked by that, and actually started laughing. That was the first tip-off that Ramanujan had discovered something much larger.”

Pierre de Fermat was one of the greatest number theorist ever, but also a huge troll. Fermat refused to publish his work, and all we know of his work today comes from items such as letters and notes collected by his son Samuel. Fermat used to communicate all sorts of formulas and theorems to his friends and collaborators, and he never showed the proof.

He went on to discover several new patterns in numbers, which took mathematicians centuries to prove after his death. Why couldn’t you publish, Fermat? One example of his many theorems is the Two Square Theorem, which shows that any prime number which, when divided by 4, leaves a remainder of 1 (i.e. can be written in the form 4n + 1), can always be re-written as the sum of two square numbers.

In time Fermat’s reputation as a mathematician who never wrong grew. Eventually, only of one his theorems remained unsolved, which stated: xn + yn = zn has no non-zero integer solutions for x, y and z when n > 2. It was all scribbled down  as a marginal note in his copy of Diophantus‘s Arithmetica, alongside a most frustrating note: “I have discovered a truly remarkable proof which this margin is too small to contain.”

Ramanujan used an elliptic curve – a cubic equation and two variables where the largest degree is 3 – to show that there are infinity many solutions that are near misses to solving the equation. It wasn’t a direct proof of Fermat’s last theorem, but it was pretty close – all inspired by 1729. In doing so, Ramanujan found something remarkable: a K3 surface – objects used in string theory and quantum physics. The thing is, K3 surfaces were first described, let alone named, in the 1950s or decades after Ramanujan’s untimely death in 1920.

“This is the ultimate example of how Ramanujan anticipated theories,” Ono says. “When looking through his notes, you may see what appears to be just a simple formula. But if you look closer, you can often uncover much deeper implications that reveal Ramanujan’s true powers.”

“Ramanujan was using 1729 and elliptic curves to develop formulas for a K3 surface,” Ono says. “Mathematicians today still struggle to manipulate and calculate with K3 surfaces. So it comes as a major surprise that Ramanujan had this intuition all along.”

“We were able to tie the record for finding certain elliptic curves with an unexpected number of points, or solutions, without doing any heavy lifting at all,” Ono says. “Ramanujan’s formula, which he wrote on his deathbed in 1919, is that ingenious. It’s as though he left a magic key for the mathematicians of the future. All we had to do was recognize the key’s power and use it to drive solutions in a modern context.”

“This paper adds yet another truly beautiful story to the list of spectacular recent discoveries involving Ramanujan’s notebooks,” says Manjul Bhargava, a number theorist at Princeton University. “Elliptic curves and K3 surfaces form an important next frontier in mathematics, and Ramanujan gave remarkable examples illustrating some of their features that we didn’t know before. He identified a very special K3 surface, which we can use to understand a certain special family of elliptic curves. These new examples and insights are certain to spawn further work that will take mathematics forward.”

Ramanujan’s story will be turned into a film, soon to be released under the title: “The Man Who Knew Infinity.” Ono is one of the associate producers. Oh, and if you were curious, Fermat’s Last Theorem was solved in 1995 by Andrew Wiles.