The idea of stars orbiting the supermassive black holes that researchers believe lurk at the centre of most galaxies has been long established as a matter of fact in science. In ‘active galactic nuclei’ or AGNs, these black holes are surrounded by haloes of gas and dust in a violent churning environment. Such clouds of gas and dust have the potential to birth not only stars but planets as well. Yet, the question of whether planets can also orbit these spacetime events has yet to be established.

Enter Keiichi Wada, a professor at Kagoshima University, and Eiichiro Kokubo, a professor at the National Astronomical Observatory of Japan. These scientists from the distinct fields of active galactic nuclei research and planet formation research respectively have calculated that as a result of gas disc growth, an entirely new class of planets may form around supermassive black holes.

“With the right conditions, planets could be formed even in harsh environments, such as around a black hole,” Wada points out.

In their research published in the Astrophysical Journal, the duo of theoreticians propose that protoplanetary discs that surround young stars may not be the only potential site for planet formation. The researchers instead focused calculations and mathematical models on the denser dust discs found around supermassive black holes in AGNs, thus arriving at a surprising conclusion.

“Our calculations show that tens of thousands of planets with 10 times the mass of the Earth could be formed [at a distance of] around 10 light-years from a black hole,” says Eiichiro Kokubo.

“Around black holes, there might exist planetary systems of astonishing scale.”

One of the hindrances to the formation of planets in such discs of dust has previously been the amount of energy generated in AGNs, Researchers had believed that this energy output would prevent the coagulation of ‘fluffy ice dust’ that can help the growth of dust grains that can lead to planet formation in protoplanetary discs.

But, what Wada and Kokubo discovered was that the huge density of dust discs around supermassive black holes in AGNs —potentially containing as much as a hundred thousand times the mass of the Sun worth of dust, which is a billion times more massive than a typical protoplanetary disc — helps protect the outer layers from bombardment from high-energy radiation such as gamma rays.

This helps form a low-temperature region similar to that found in protoplanetary discs, and thus, in turn, increases the likelihood of fluffy deposits building.

The process would lead to the formation of planets within a period of several hundred million years, according to the pair, and also result in much denser and more populated collections of planets.

Unfortunately, the limits of current methods of identifying exoplanets would make identifying planets around a supermassive black hole challenging to say the least.

“ Doppler spectroscopy, transit photometry, gravitational micro-lensing, or direct imaging are hopeless,” warn the duo in their paper. They go on to suggest that a method called photometry with an x-ray interferometer located in space could be a possible solution — if a way of distinguishing the effect caused by such planets from the natural variability of the AGN can be developed.

For now, researchers will have to look to mathematical models alone to theorise about the potential for planets in orbit around black holes. 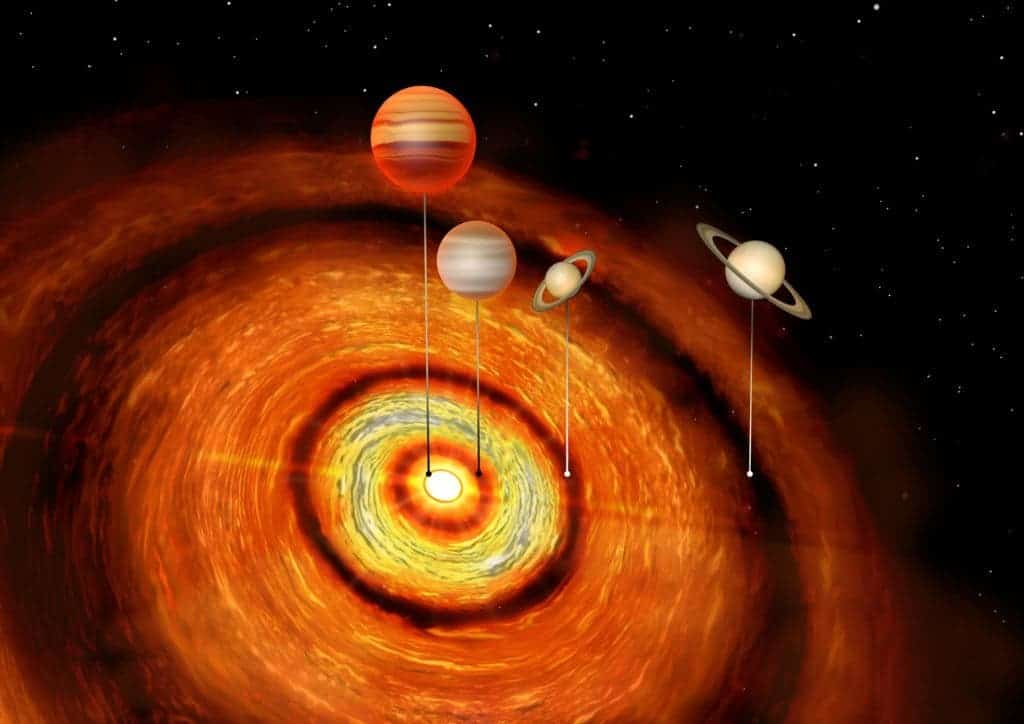 Illustration of CI Tau, which is surrounded by a planetary disc and has four gas giants orbiting around it. Credit: University of Cambridge.

Astronomers have discovered a peculiar solar system some 500 light-years away from Earth that may force them to rethink how planets form. The star in question is only two million years old — a mere ‘toddler’ by astronomical standards — but despite its very young age, it’s orbited by four Jupiter and Saturn-sized planets.

Since the first confirmation of an exoplanet orbiting a sun-like star in 1995, and with only a few narrow slices of our Milky Way galaxy surveyed so far, astronomers have confirmed 2,327 exoplanets, with a further 2,244 awaiting confirmation.

A recent statistical estimate places, on average, at least one planet around every star in the galaxy. However, only 1% of the stars astronomers have surveyed so far host a hot Jupiter — a class of gas giant exoplanets that are inferred to be physically similar to Jupiter but that have a very short orbital period.

Most of the hot Jupiters currently identified orbit stars that are at least hundreds of millions of years old. This is why CI Tau, the young star recently studied by researchers at the University of Cambridge, is so interesting. What’s more, it has not one but four gas giants orbiting it.

The astronomers used Atacama Large Millimeter/submillimeter Array (ALMA) to identify the exoplanets. CI Tau is surrounded by a huge disc of dust and ice, known as a protoplanetary disc, which will seed planets, moons, asteroids, and other objects in its system. ALMA’s instruments were able to find distinct gaps in the disc which theoretical modeling showed would correspond to gas giant planets orbiting the star.

According to the new study published the Astrophysical Journal Letters, the four planets differ greatly in their orbit. The closest planet to CI Tau, a juvenile hot Jupiter, is within the equivalent orbit of Mercury.

The farthest orbits are at a distance three times greater than that of Neptune from the Sun. The two outer planets are about the mass of Saturn, while the two inner planets are around one and 10 times the mass of Jupiter respectively. Given that the outermost planet is more than a thousand times further from the star than the innermost one, the system has also set a new record for the most extreme range of orbits observed so far.

Scientists are not sure what to make of this anomalous system. Hot Jupiters have always puzzled astronomers because they are often thought to orbit too close to their parent stars to have formed in situ — instead, they might be captured rogue planets. But considering the age of CI Tau, the findings suggest that hot Jupiters could form within close proximity of a star.

“It is currently impossible to say whether the extreme planetary architecture seen in CI Tau is common in hot Jupiter systems because the way that these sibling planets were detected—through their effect on the protoplanetary disc – would not work in older systems which no longer have a protoplanetary disc,” said Professor Cathie Clarke from Cambridge’s Institute of Astronomy, the study’s first author.

In the future, the team of researchers plans on studying CI Tau at multiple wavelengths to learn more about the disc and its planets. For instance, they would like to see whether the outer planets played a role in driving their innermost sibling into such an ultra-close orbit. How the two outer planets formed in the first place is also a mystery.

“Planet formation models tend to focus on being able to make the types of planets that have been observed already, so new discoveries don’t necessarily fit the models,” said Clarke. “Saturn mass planets are supposed to form by first accumulating a solid core and then pulling in a layer of gas on top, but these processes are supposed to be very slow at large distances from the star. Most models will struggle to make planets of this mass at this distance.”

Similar to how stars are formed, the most popular theory among today’s scientists regarding the creation of planets is that they are a result of a nebula breaking down. During the long evolution of the deteriorating gaseous cloud, the nebula transforms into a structure called a protoplanetary disk, with a newly-formed star at its center. Such a disk provides a place of incubation for developing planets.

Just recently, for the first time on record, young planets-to-be (also referred to as protoplanets) developing in one of these protoplanetary disks were actually “weighed”. Several scientific papers published earlier this month as inclusions in the Astrophysical Journal Letters discuss a new mode of operation which can be employed to calculate various physical attributes of these protoplanets. It’s also rather accurate and dependable.

One group of astronomers headed by Richard Teague was responsible for the discovery of two young planets having a mass close to the size of the mass of Jupiter, the largest planet in our solar system. The two bodies orbit a star which has been labeled HD 163296. This four-million-year-old ball of burning gas is still a youngster as a star the size of our Sun would have a normal life expectancy of about 10 billion years and beyond. 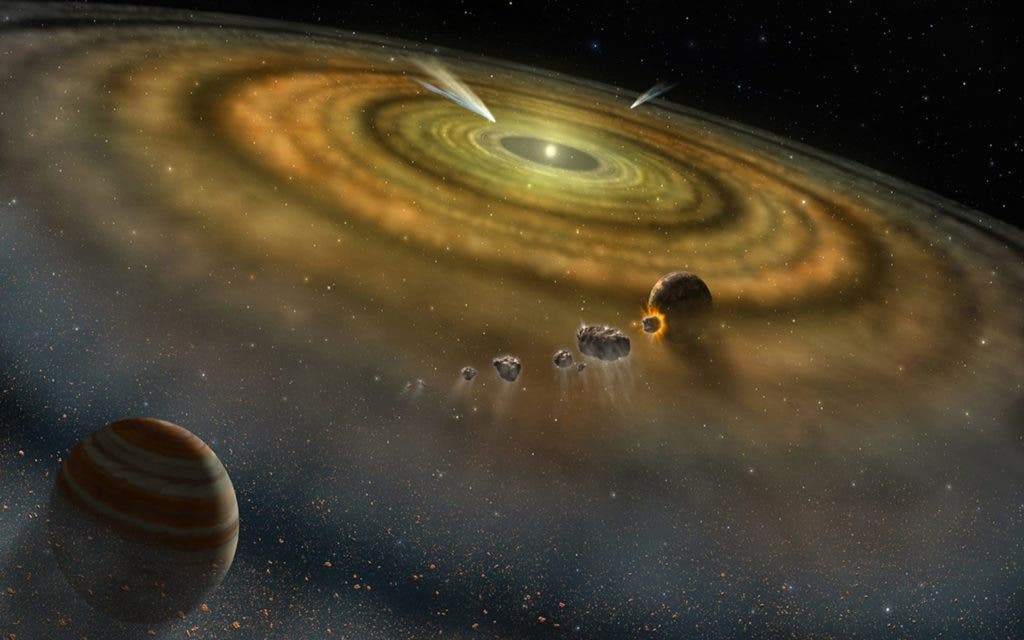 But a separate party of scientists, this one based in Australia and headed by Christophe Pinte, was also spending time examining the same system. They noticed a third protoplanet in a revolution around the very same star. However, the finding attributed to Pinte’s team was a young planet nearly twice as massive as the gas giant Jupiter.

Both of the teams employed data from the Atacama Large Millimeter/submillimeter Array (ALMA). This is a system of radio telescopes located in Chile, South America. The two teams of astronomers closely examined the motion of the nebulous gas. Both managed to develop a process of measuring the gas’s velocity by observing the change in the wavelength of light emitted by carbon monoxide molecules.

The gravitational pull of a planet would best explain the gaseous movements. Richard Teague thinks this method of measurement could be used effectively in observing many other stars and protoplanets. In this way, he hopes scientists will be able to discover what types of protoplanets are most common in the cosmos.