Scientists in South Korea have developed a non-invasive, lightning-fast test that diagnoses prostate cancer with a stunning accuracy of up to 100%. Unlike traditional methods that require a biopsy, this test, which employs a smart AI analysis method, only needs a urine sample.

Prostate cancer is one of the most dangerous types of cancers out there, especially for older men, with about 99% of cases occur in those over the age of 50. It is the second-leading cause of cancer death for men in the United States. About 1 in 35 men will die from it.

Patients are typically screened for prostate cancer through the detection of prostate-specific antigens (PSA), a cancer factor, in the blood. The problem is that the diagnostic accuracy of screening for this cancer factor is just 30%. In order to cover the loose ends, doctors often recommend undergoing additional invasive diagnosis methods, such as a biopsy. These measures, although potentially life-saving if the cancer is caught early, can be painful and cause bleeding.

Dr. Kwan Hyi Lee and Professor In Gab Jeong from the Korea Institute of Science and Technology (KIST) may have come up with a much better test.

Their test screens for prostate cancer by looking for four cancer factors in the urine of patients rather than blood. These cancer factors are detected by an electrical-signal-based ultrasensitive biosensor that is sensitive enough to detect trace amounts of the selected molecules.

The team of researchers developed and trained an AI that identifies those with cancer prostate from the urine samples by analyzing complex patterns of the detected signals. For the 76 urinary samples that they used, the researchers reported almost 100% accuracy.

“For patients who need surgery and/or treatments, cancer will be diagnosed with high accuracy by utilizing urine to minimize unnecessary biopsy and treatments, which can dramatically reduce medical costs and medical staff’s fatigue,” Professor Jeong said in a statement.

The findings were reported in the journal  ACS Nano.

The algorithm was able to identify cancer from biopsies with comparable results to an experimented pathologist — and the algorithm could be applied to detecting other types of cancer.

Pattern recognition is one of the things artificial intelligence (AI) does best, which makes it excellently suited for medical imaging analysis. We’ve already seen algorithms detect several diseases with doctor-like accuracy, and the results keep improving. This approach has the potential to accelerate the detection of numerous conditions and to supplement the medical workforce and expertise.

In the latest such effort, an AI was trained to detect prostate cancer from biopsy samples. The researchers started with a million image samples that had been previously labeled by expert pathologists. The AI was ‘taught’ to detect cancer and was then tested on 1,600 slides taken from 100 patients from the University of Pittsburgh Medical Center (UPMC) who were suspected of prostate cancer.

The results are comparable to those of experienced doctors, researchers say.

“Humans are good at recognizing anomalies, but they have their own biases or past experience,” said senior author Rajiv Dhir, M.D., M.B.A., chief pathologist and vice chair of pathology at UPMC Shadyside and professor of biomedical informatics at Pitt. “Machines are detached from the whole story. There’s definitely an element of standardizing care.”

In addition, the algorithm’s usefulness extends beyond cancer detection. It was also able to flag other tumor parameters, such as grade, size, and invasion of the surrounding nerves, which are clinically important features.

In addition, the AI also flagged six slides that were not noted by doctors, and seems to be very useful in detecting atypical types of tumors.

“Algorithms like this are especially useful in lesions that are atypical,” Dhir said. “A nonspecialized person may not be able to make the correct assessment. That’s a major advantage of this kind of system.”

However, this is not to say that the AI is already better than doctors. The AI only looks at the biopsy image, whereas doctors look at the entire pathology to draw a conclusion, but this could be a failsafe mechanism to catch cases, especially in hospitals where expertise is scarce.

The study has been published in The Lancet Digital Health.

Researchers at the University of Georgia may be zooming in on a treatment for prostate cancer. Their new therapy shows great efficacy for mouse models, and the treatment is expected to go in human trials.

Prostate cancer is the second most common type of cancer, killing some 10,000 people in the UK every year (rates vary greatly across the world), with most men over 50 being at a very high risk of disease. The proposed treatment inhibits the activity of a protein called PAK-1. PAK-1 is responsible for the development of highly invasive prostate cancer cells.

“PAK-1 is kind of like an on/off switch,” said study co-author Somanath Shenoy, an associate professor in UGA’s College of Pharmacy. “When it turns on, it makes cancerous cells turn into metastatic cells that spread throughout the body.”

The solution they propose bears a similar name – IPA-3. IPA-3 is a molecule which limits the activity of PAK-1 proteins. Shenoy and Brian Cummings, an associate professor in UGA’s College of Pharmacy, packed IPA-3 in a bubble-like structure called a liposome and injected it intravenously. The liposome shell surrounding IPA-3 ensures that it is not metabolized by the body too quickly, allowing the inhibitor enough time to disrupt the PAK-1 protein. Hitting this timing is important for the disruption of PAK-1.

They found that following this treatment,

“When we first began these experiments, we injected IPA-3 directly into the bloodstream, but it was absorbed so quickly that we had to administer the treatment seven days a week for it to be effective,” Shenoy said. “But the liposome that Dr. Cummings created makes the IPA-3 much more stable, and it reduced the treatment regimen to only twice a week.”

The preliminary results are really good, but there is still a while before we can test this on humans. They’ve shown that the treatment can work, now they have to see what negative side effects it could have.

“The results of our experiments are promising, and we hope to move toward clinical trials soon,” he said, “but we must figure out what side effects this treatment may have before we can think about using it in humans.”

Scientists have found a way to prevent cancerous tumors in the prostate from spreading, effectively switching off the disease. Researchers from Bristol and Nottingham universities found that a single molecule plays a crucial role in the forming of new blood vessels, and the spread of tumors could be halted with a mere injection. 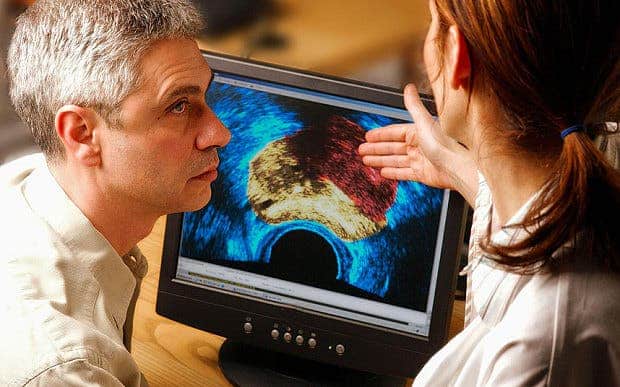 Prostate cancer could be switched off with an injection which prevents further tumour growth Photo: Alamy

A neoplasm (commonly known as a tumor) is an abnormal growth of tissue. Tumors need a constant flow of blood to survive and grow – so if we could somehow prevent the blood from flowing to tumors, we could prevent their growth, and even destroy them. Scientists also found that a single molecule (SRPK1). When scientists injected mice three times a week with a substance to prevent the SRPK1 molecule from working, the tumors’ spread halted.

“We reasoned that inhibition of SRPK1 activity could stop cancer progression,” said Dr Sebastian Oltean, the study’s co-author from the University of Bristol’s School of Physiology and Pharmacology. Indeed, we show in this paper that if we decrease SRPK1 levels in prostate cancer cells we are able to inhibit tumour vasculature and growth.”

SRPK1 also plays a key role in angiogenesis. Angiogenesis is the physiological process through which new blood vessels form from pre-existing vessels; it’s also the process through which tumors are able to form blood vessels and obtain the nutrients for their growth. By monitoring SRPK1 levels, researchers found that the levels increase when the cancer becomes more aggressive, and they were then able to figure out the connection between the molecule and angiogenesis.

Prostate cancer is one of the most dangerous types of cancers out there, especially for older men. About 99% of cases occur in those over the age of 50. In the UK alone, 40,000 people are diagnosed with prostate cancer every year. It is also the most common type of cancer in men in the United States, with 186,000 new cases in 2008.

To make results even more interesting, because all cancerous tumors rely on a constant supply of blood, the method could also be applied in other cancers. The study authors also think the same approach could be used to treat age-related macular degeneration, the most common form of blindness. Professor David Bates, co-author from the University of Nottingham’s Division of Cancer and Stem Cells, said:

“Our results point to a novel way of treating prostate cancer patients and may have wider implications to be used in several types of cancers.”

“There’s no denying that there are too few treatment options for the 40,000 men that face a diagnosis of prostate cancer every year in the UK – especially for those with advanced disease. Prostate cancer continues to kill over 10,000 men annually and there is an urgent need for new treatments if we are to significantly reduce this figure. Although it’s early days, each finding like this represents a crucial block in building up our understanding of what can slow down and stop the progression of prostate cancer. This understanding will give us the foundations needed to develop new targeted treatments for those men in desperate need.”

Green tea has some absolutely remarkable properties: it has a swarm of antioxidants, it is good for preventing a huge number of diseases (including some cancers), it boosts the immune system and it also helps you lose weight. But now, researchers have found that it can also help regulate and slow down the evolution of already present cancer.

Susanne M. Henning, PhD, RD, adjunct professor at the David Geffen School of Medicine at the University of California, Los Angeles presented her discoveries at the American Association for Cancer Research meeting on cancer prevention.

”We were able to show the green tea polyphenols (antioxidants) reached the prostate tissue and they did modify inflammation of the prostate,” she says. Polyphenols are antioxidants that protect against cell damage.

Hanning’s team analyzed 79 men with prostate cancer to drink either six cups of brewed green tea or water daily – they were all scheduled for surgery, and had to drink these before the operation. The bad thing is that only 67 men actually completed the study, but out of them, those who had drank green tea showed remarkably lower levels of PSA (prostate-specific antigen, a protein which may reflect the status of the prostate cancer). An indicator of inflammation and cancer growth, called nuclear factor-kappaB, was also reduced in those who drank green tea compared to those who didn’t. Still, it’s not all rosy.

“We were not able to inhibit tumor growth,” she says. But the study length may not have been long enough to show that; a longer-term study is needed, she says.

Prostate cancer is typically a slow developing cancer, so dietary measures to slow it down even more are often a way of action. If green tea indeed inhibits the growth of the cancer, and not just some related proteins, then it might be a true weapon in the cancer-fighting arsenal. But there’s still a long way to go.

Despite going through one of it’s darkest periods, British research is still coming up with great results: British medical researchers have developed the first reliable test of whether men are at high risk of prostate cancer. The test relies on urine rather than blood, and so far results have been nothing short of extraordinary; since it relies on urine, it would also be cheaper and easier to take.

Prostate cancer is the most common form of cancer in men, affecting 35.000 men in the UK alone, and killing one third of them. This research showed that men with prostate cancer have reduced levels of a protein called MSMB, but it is still to early to show just how accurate this test is.

Get the full report here.